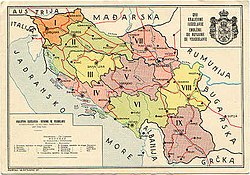 State of Slovenes, Croats and Serbs[edit]

The State of Slovenes, Croats and Serbs, which included South Slavic territories formerly belonging to the defeated Austro-Hungarian Empire, was created after the end of World War I. Following the established romantic nationalist idea of the union of South Slavic peoples in one state (with an added dose of not as bad as Italy), it joined the Kingdom of Serbia one month after its creation to form the Kingdom of Serbs, Croats and Slovenes, also known as Kingdom SHS.

Kingdom of Serbians, Croats and Slovenes[edit]

State flag of the Kingdom of Yugoslavia.

Yugoslavia became a constitutional monarchy after the unification. The kings were descendants of the Karađorđević lineage, and the purpose of Yugoslavia was assimilation of all southern Slavs into one nation. Scholars and artists denounced the idea, but it was widely accepted in political circles. The process of assimilation and centralization continued along with dictatorship of the king starting in 1929; he officially renamed it the Kingdom of Yugoslavia that same year. Being surrounded by enemies, Yugoslavia entered into an alliance with the Axis powers in the Tripartite pact of 1941. The people and the army denounced the idea of signing the pact, so they protested and undertook a coup d'état (recent scholarship suggests that this coup was almost certainly engineered by the Allies). Hitler had had enough of Yugoslavia so he attacked it from all directions. The government capitulated and ran for the hills to London, and four days later the "Independent State of Croatia" was formed with German support. Thus, the occupation began.

During World War II, after Yugoslavia was conquered by the Nazis, the Communist-led guerrilla movement led by Croat-Slovene Josip Broz Tito came to power and, after initial failures, defeated the occupiers' and the collaborators' units. During the war a significant number of Croats and Bosnians had collaborated with the Nazis and had killed many political opponents regardless of nationality in an attempt to break up the resistance movement. They soon began a campaign of terror against Serbs and Jews, putting them in concentration camps and even making several for Serbian children. There were also Chetniks, a royalist resistance movement that become a nationalist collaboration later on. Serbs would later attempt to use this as justification for ethnic cleansing of Bosnians and Croats in the 1990s (while at the same time ignoring their own history of collaboration with the Nazis as well as with Ustaše themselves on occasion)[1][2] or the fact that the partisans were composed of all ethnic groups.

The Socialist Federative Republic of Yugoslavia[edit] 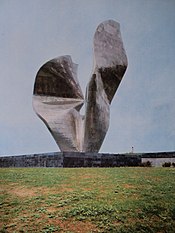 The whole country was peppered with modern art war memorials. This one looks like the "We're #1" glove.

Josip Tito took control over the country now named the Federative People's Republic of Yugoslavia (renamed to Socialist Federative Republic of Yugoslavia in 1963) after the war ended. Because Tito's forces had mostly pushed the Nazis out on their own, with only minimal Soviet aid, Tito and Yugoslavia enjoyed greater autonomy within the Communist bloc. In the end, Tito broke with Stalin and Yugoslavia became a neutral Communist country (throughout the 1950s in the Soviet sphere "Titoism" was considered the worst Communist ideological heresy.) Initially starting with a typical Stalinist-style command economy, they began decentralizing in 1951. Yugoslavia tended to enjoy a better quality of life than its Warsaw Pact neighbors with significantly better access to consumer goods (both foreign and domestic) and generally had fewer restrictions on its citizens. To this day, Tito is remembered fondly by many in the former Yugoslav republics, if only because what happened after his rule was much worse.

Tito managed to keep the ethnic tensions under control and worked to foster a greater "Yugoslav" identity. Experts are divided on how well he managed this; however, until the 1990s there did seem to be a strong sense of "Yugoslav"ness.

However, in the early 1990s, opposition leaders trying to make a name for themselves played up the possibilities of ethnic and religious tension within the multinational state, and in both Croatia and Serbia nationalists came to power. This led to the civil wars of that period, and the breakup of the country. Slovenia, high up in the Alps with lots of money, fled first with a minimum of fuss, followed by the departure of Macedonia (to this day still involved in an intense diplomatic dispute with Greece over its name, which Greece claims sole right to). Then, Croatia and Bosnia departed with a maximum of fuss, leading to intense fighting between the three competing factions marked with sectarian-driven mass murder (the term "ethnic cleansing" was coined here), the genocide of Bosnian Muslims at Srebrenica and elsewhere as well as massive military intervention from the Clinton administration and allied countries such as Italy. Serb leader Slobodan Milošević's administration collapsed after attempting to negate an unfavorable democratic election. Serbia and Montenegro parted ways in 2006, while Serbia's Albanian majority province Kosovo declared independence in 2008 amid protests from Serbia itself as well as other countries with native separatist movements such as Russia and Spain.

Thus dismembered completely, Yugoslavia stands as a reminder of the strength of nationalism, both to create and to destroy, to bring people together and to drive them apart.