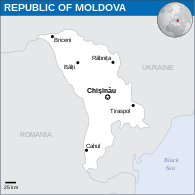 Moldova is a small republic in eastern Europe around the Dniester river. It was largely created out of part of Romania that Stalin took after World War Two, with a bit of Ukraine added, although the land had been traded back and forth for centuries between empires. Because of the division between ethnic Romanians and ethnic Russians (or at any rate Russian-speakers), after becoming independent in 1991 it fought a brief civil war before the eastern part became the breakaway sliver of land republic of Transnistria which despite being de facto an independent nation for over 25 years still isn't recognized by any UN state (not even Russia despite being protected by Russian troops), and seems trapped in even more of an authoritarian Soviet timewarp than the rest of Moldova.

Aside from Communist-era nostalgia, Moldova's main export is wine, which has been grown there for almost 5000 years.[1] Formerly much of this was exported to Russia, but Russia uses occasional embargos to exert political pressure, the monsters.[2]

Moldova is notable in Eastern Europe for electing a communist government … in 2001! The Communist Party was banned after independence but swiftly unbanned and proved surprisingly popular. They ruled the country from 2001 to 2009, when following a wave of popular protests, a pro-Western coalition came to power.[3] The nation is split between the pro-communist countryside and the capital Chișinău which is more middle class and pro-West. The communists won another election victory in April 2009, but opposition leaders accused the communists of widespread electoral fraud, multiple voting, and similar things. April 2009 saw a string of protests against the communist government, which turned violent as the authorities tried to stifle them.[4] Protestors used such modern techniques as Twitter and flashmobs, while the government relied on time-honored methods such as torture and death in suspicious circumstances. To calm the situation, the government agreed to a recount, but this proved a whitewash and the result was unchanged. However, after further instability, new elections were called in July, in which the communist vote fell to 44.7% and an opposition coalition took power.[5]

There was a new wave of protests in 2015-2016 against corruption, following a bank fraud that led to $1bn disappearing from Moldovan banks in 2014. Former prime minister Vlad Filat was one of several prominent figures detained in a lengthy and inconclusive investigation over the next few years. Maia Sandu of the center-right Party of Action and Solidarity became prime minister in 2019, still promising to prosecute those involved in the fraud.[6]

There is a movement towards unification with Romania, with a large march on 5 July 2015 in the midst of arguments over the $1bn bank fraud. The 100th anniversary of the unification of Bessarabia with Romania on March 27, 1918, saw further calls for unification.[7] The Christian-Democratic People's Party supported unification until 2015, but now only a few very small parties are in favor. Nonetheless, polls show 20-25% of Moldovans in favor and a majority of Romanians willing to welcome them in.[8]

The nation still has problems with LGBT rights, discrimination against Roma (Romani people), torture, and unfair trials for people protesting against the government.[9]

See the main article on this topic: Transnistria 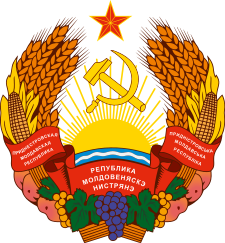 Transnistria is one of several secessionist regions around the world that are in limbo, effectively independent with their own government, administrative services, and civil institutions, but no recognition as an independent nation. Transnistria appears still caught up in the communist traditions of the old Soviet Union, with a hammer and sickle on its flag and coinage depicting figures like Alexander Suvorov and Catherine the Great. It still has a garrison of Russian troops, although they refrain from invading western Moldova.[10][11] It is widely perceived to be an authoritarian state still trapped in the past, with poor respect for human rights, in particular issues such as rights for people with HIV and tuberculosis (TB), disability rights, the rights of women, Roma and other minorities, and protection for NGOs and human rights campaigners. In recent years, there are signs of improvement but still some way to go.[12][13]

There is no state religion, but the Eastern Orthodox Church is prominent, with the Metropolis of Chișinău and All Moldova under the Russian Orthodox Church the largest organisation; 90.1% of the population is Orthodox Christian according to the 2014 census, with no answer (6.9%) making up most of the remainder.[14][15]

The main and official language is variously known as Romanian and Moldovan, and which name you use for it can have political connotations; there are also debates about whether Romanian and Moldovan are the same or different languages. In the USSR, the language was strictly known as Moldovan, but today those who are more pro-Romania may call it Romanian. Officially (in Moldovan government documents), the two names refer to the same language, and there is no difference in formal written texts where the standard Romanian words and grammar are used, although there are variations in dialect and accent when spoken. The 2000s communist government was keen on asserting its non-Romanianness, and in one memorable diplomatic incident, the Romanian foreign minister addressed the Moldovan president in French, and the Moldovan president responded in Russian, even though they could have both spoken their native language(s). There are also claims that the Romanians have been trying to get the European Union to refer to the language of Moldova as Romanian not Moldovan.[16]

Under Soviet rule, the language was written in the Cyrillic alphabet, whereas Romanian over the border is written in the Latin alphabet, as you might expect for a romance language. The USSR may have been trying to simplify typewriter manufacture, but there was probably an element of Soviet nationalism as well. In 1989, as communism fell, the Latin alphabet was re-adopted in Moldova.[17][18]

As with other members of the former USSR, there is a significant Russian-speaking minority, and Russian may be used as a lingua franca for communications with neighbouring countries; it is particularly common in the province of Gagauzia and in Transnistria. As in other former Soviet Republics, the use of Russian can carry associations of fondness for Vladimir Putin and Russia or even Stalin. Questions of national identity are crucial. Aside from the Russian and Ukrainian minorities, people argue whether they are Romanian or Moldovan, and some prefer the name of the province of Bessarabia which covered the same area.[16]

Magnetic Hill in Orhei, Moldova, is one of several similar places around the world (known as magnetic hills or gravity hills