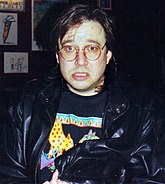 William Melvin "Bill" Hicks (1961–1994) was an American stand-up comedian, musician and satirist. He is pretty much dead, much to the relief of the establishment that he lampooned with ruthless incisiveness.

Hicks' comedy revolved largely around drugs, social norms, politics, drugs, religion, drugs and dicks. Occasionally, his act would include an appearance from "Goatboy." He was known to have taken drugs, especially magic mushrooms and LSD, although he later stopped and even gave up smoking.

He saved his most scathing social commentary for the Republican Party (especially Sen. Jesse Helms), the pro-life movement, John F. Kennedy assassination conspiracy theories, the War on Drugs, the first Gulf War (his commentary thereon was also eerily applicable to the second Gulf War) and the state of the US entertainment industry, in particular reality TV, teenage pop stars and artists who "sold out" to do advertisements.

Hicks died of pancreatic cancer at the age of 32. Or did he turn into Alex Jones?[1] He was a devotee of Transcendental Meditation.[2]

Bill Hicks, although saying he didn't do them any more, was against criminalization of drugs and viewed them as a positive and enlightening.

Such conspiracies, as well as faking his own assassination on stage, were used by Hicks in his routines to illustrate the insidiousness of out-of-control governments who have killed influential people who threaten their interests and encouraged people to think for themselves.

Bill Hicks was somewhat of a deist (or a pantheist, it's rather unclear what he was) but didn't believe in any religions. He especially liked to mock Christian fundamentalism in the USA.