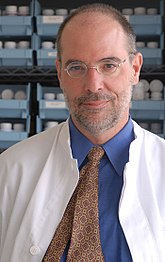 This is based on improperly linking the idea that your blood type is linked to your genotype and that A type blood, for example, is linked to reduced ability to digest meat.

The diet was founded by Peter D'Adamo (a naturopathic "doctor") and published under the catchy-titled Eat Right 4 Your Type (the misuse of a number in place of a word is our first warning sign that it's bogus). It was founded based on the evolutionary theory of blood type. Although the diet ignores factors such as Rhesus negative/positive and other rarer sub-types, D'Adamo claims that 90% of the properties of the blood are due to the ABO groups.

There are four primary blood groups in the ABO system. Types A, B, AB and O. For each group, a different diet is recommended for healthy living. Each is also very scientifically assigned a cool comic book villain nickname.

While it is certainly true that genetics plays a part in what humans can effectively digest and that blood type is also dependent on genetics, correlating the two is as dubious as linking metabolic rate to hair color. One of the central aspects of the diet claims that lectins

(a type of protein present in certain foods) react differently depending on blood type, something currently not backed up by any biochemical research.

There is also a considerable lack of genuine clinical trials testing the diet, despite multiple claims by D'Adamo to the contrary. His own trial, which has apparently lasted 10 years, still has not been published — so the results he claims cannot be accepted at face value. Indeed his unwillingness to publish the findings in full could indicate that the methodology may not be rigorous or the results may not be as conclusive as he would like his supporters to believe. The only evidence he has properly presented was a survey on his website, saying that about 70% of people thought it worked.[1] However, self-reported "data" like this are subject to bias because they are inherently not double-blind, and in fact are highly self-selecting.

The blood type diet "works" simply because it is a diet (or rather set of diets) which could really work for anyone, regardless of blood type. One study found that the diet for type A improved the health of all blood types, not just type A.[2] The blood type diet is essentially 4 different diets (all restrictive) given a new "scientific spin".

The appeal of the blood type diet is that it takes advice that could be applied to anyone and makes it sound specific to certain groups, making it seem like each group is "meant" to eat in that manner. This technique resembles the Forer effect; it's the same technique used by astrologers who give life advice for each zodiac sign. Just like how a self-help book for relationships between Libras and Scorpios contains tips that can smooth out any relationship, a book on how people with A+ blood should eat contains a diet that could help anyone of any blood type lose weight and achieve better health. Proponents could easily try a diet for a blood type other than their own and achieve the same success.