From RationalWiki
(Redirected from Big pharma)
Jump to: navigation, search

Big Pharma is the pejorative nickname given to the pharmaceutical industry. Critics of the industry often use this nickname when discussing abuses by the industry, including:

There are scientifically literate criticisms of Big Pharma. However, the overwhelming majority of criticism comes from non-scientific bases. Many alternative medicine merchants (such as homeopaths and naturopaths) stridently blame most or all opposition on Big Pharma rather than, say, a lack of scientific evidence for their claims.

The pharmaceutical industry does have issues.

Since 2010, there have been more overdoses resulting in death in the United States from prescription opioid pharmaceuticals than heroin and other street narcotics.[3][4] The Centers for Disease Control (CDC) also classifies prescription drugs as the leading cause of injury from overdose.[5][6] The opioid epidemic is a powerful example of actual sins by the pharmaceutical industry, and rather big ones. This is one area where it wouldn't be hyperbole to say Big Pharma has blood on its hands...but strangely, antivaxxers aren't outspoken about this one.

While many countries allow over-the-counter drugs to be advertised, only the United States and New Zealand allow prescription drugs to be advertised on television. Many critics believe Big Pharma has abused this tolerance by pushing drugs that may not be effective or applicable to their conditions on viewers.[7][8] In the United States, TV advertisements for pharmaceuticals must list the major side effects that were detected during the drug's safety trials; this disclosure can give the false impression that older drugs (the ones that came out before TV advertising was an option) are safer than all these newfangled drugs, when in fact the older drugs tend to have just as many side effects as the new ones do. (The litany of side effects for aspirin, for example, would fill several pages.)

In American democracy, no such re-examinations have been forthcoming. To prevent any change which would impact their profits; the healthcare industry spends 4 times as much as defense contractors lobbying in Washington.[9][better source needed] To the contrary, the latest update to the Medicare program for senior medical care ("Medicare Part D") explicitly prevents the government from negotiating prices with Big Pharma for the drugs it buys. The taxpayers' largesse toward Big Pharma was spearheaded through the selfless efforts of Senator Chuck Grassley, a Republican from Iowa.[10] Of course, it's purely a coincidence that the medical industry is the leading contributor to Grassley's political fundraising.[11] Great job, GOP.

Thanks, in part, to televised pushing of prescription drugs, the United States — which makes up 5% of the world's population — accounts for 42% of the money spent on prescription drugs.[12] Meanwhile, as a result of this abuse, the New Zealand government is reconsidering whether it should continue to allow Big Pharma to advertise prescription drugs on television.

Big Pharma often enlists the help of advertising executives to coin names for new maladies and rename old maladies to try to expand the number of prescriptions written. One new malady is Restless Leg Syndrome or RLS, which is caused by too much stress, not enough sleep and the use of stimulants (caffeine mostly), alcohol, H2-histamine blockers, iron deficiency or insufficiency, and certain antidepressants. Back in the day when people only worked one job, RLS wasn't much of a problem. However, because some Americans now need to work two or three jobs just to make ends meet, RLS is much more common. RequipTM[13], as a result, is the RLS treatment most often advertised on American TV.

Because old diseases don't have the emotional punch that three- and four-letter acronyms have and the fact in order to sell a drug it has to treat a disease, Big Pharma regularly practices Newspeak and creates new names or even new diseases, which has been coined "disease mongering" or "medicalization".[14][15][16][17] These new names are often 3 or 4 words long, allowing for them to form a catchy acronym for the condition.[12] One example is Erectile Dysfunction or ED. It's bad enough when she says "it happens to every man" at some time. It's worse when, a few days later, her family and friends start addressing you as "The Old Softie." Priapism is the term for that certain side effect where the man has a prolonged[note 2] erection without being aroused. Thank the advertising firm for Cialis,TM which was the first to incorporate the "four-hour erection"[note 3] boast warning in their product's commercials. 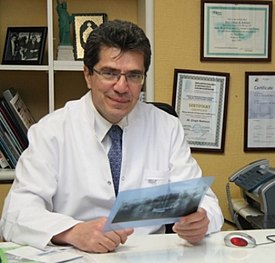 "I'm a doctor, and I approve of whatever's being said on this Rationalwiki page. Did I mention I'm a doctor?"

One of the big problems with Big Pharma is the practice of ghostwriting. This involves pharmaceutical companies paying off doctors to slap their names on some glowing review or commentary, which is little more than an advertisement for a product and then attempt to slip it into medical journals. A particularly egregious case of this was when pharmaceutical companies hyped menopausal hormone replacement therapy for off-label therapies and downplayed the risk of breast cancer.[18] In one instance, Merck even managed to get an entire bogus journal set up by Elsevier called the Australasian Journal of Joint and Bone Medicine.[19]

Another problem with the influence of pharmaceutical corporations is the possibility of publication bias in research they sponsor. Pharmaceuticals carrying out their own clinical trials must register the trials in a database by law, but they are not required to disclose the results of all of their trials. This enables them to inflate the effectiveness of a drug by sitting on negative trial data.[20] Ben Goldacre is a noted critic of the way in which pharmaceutical companies refuse to release the data from negative and inconclusive trials.

(pron. toe-zan), a former Louisiana Democrat who jumped ship to become a Gingrich crony as part of the Southern Strategy, quit Congress to negotiate a $76 billion deal for Big Pharma with Obama as part of the Democrat's emergency spending package and Obamacare.[27]

One of the realities of the marketplace and drug patents is that every company has a monopoly on every non-generic drug they produce. This results in monopoly pricing, complete with varying prices between countries, to the point where the same drug can cost 100 times what it does in one place as another.[28] Why not start a business where you buy in the cheap countries and sell in the expensive ones? Sorry, that's illegal due to effective lobbying. The pharmaceutical will defend the price gouging by claiming they need to recoup the cost of research and development, a claim that would make sense except for the minor fact that the companies spend far more on marketing than on R&D.[29]

Historically, most pharmaceuticals were not tested on female lab rats (or, for that matter, on female humans). However, in May of 2014, the National Institutes of Health (NIH) requires that to receive their funding studies include roughly 50/50% ratios of male to female cells, lab rats, and human subjects. This notably does not mandate these standards for all drug tests in the US, only those funded by the NIH. In 1993, the FDA repealed a 16-year-old policy that has excluded most women with "childbearing potential" from the earliest phases of clinical trials.[30]

One thing that drug manufacturers all agreed on was to strangle Medicare for All in its crib[31]. According to opensecrets, "Depending on the version of the bill, it would likely create stricter regulation on drug prices, eliminate the need for some private insurers and cut the bottom line for hospitals that rely on private insurance reimbursement rates." Indeed, the combined amount of spending they reported on was "$143 million" in 2018 alone. This is despite MDA being a single-payer healthcare system[32], something that a majority of the US wants[33][34], essentially making Big Pharma part of the plutocracy.

The cumulative effect of lobbying and pharma's bad reputation over many years has the inevitable effect of being used as fuel for the fire of anti-vaccination conspiracy theories[35]. From trying to get favours by putting money in the pocket of Donald Trump's personal attourney[36] to engaging in literal research fraud[37][38], it would hardly be difficult to make a conspiracy theory of one's own purely focusing on Big Pharma's character.

While the pharmaceutical companies, as shown above, do have a lot to answer for regarding their business practices, some critics of Big Pharma go way, way beyond the realm of well-deserved criticism of these corporations.

The groups that push Big Pharma conspiracies tend to fall into two camps which often overlap: alternative medicine cranks, quacks, and other woo-meisters as well as stock conspiracy theorists. Big Pharma plays the villain in the quack persecution complex as it works tirelessly to suppress their "brilliant cures". The general train of thought behind those who reject evidence-based medicine is that the entirety of medical science (or "Western medicine") is fraudulent and all the studies and experiments are bogus. Any studies showing inefficacy of a treatment are immediately latched onto as "proof" that medical science is bunk by Joseph Mercola and Mike Adams types.[note 4] Then there are the really cranky cancer conspiracies revolving around the idea that Big Pharma invented the cure for cancer but is covering it up.[39] This is a popular one among raw foodists who believe raw food is "the cure that Big Pharma doesn't want you to know about." There is also a new bunch of fringe theorists, who think that all cancer is a fungus, and that all scientific studies on cancer are therefore frauds. This is all supported by one Italian oncologist, called Tullio Simoncini.[40] Ironically, he is under investigation for fraud and homicide after his treatments killed a woman with breast cancer.[41][note 5] Anti-vaxxers also live on Big Pharma conspiracy theories. This opens the door for the woo-meisters to peddle their bullshit, because, you see, they actually care about you while Big Pharma has a profit motive and they don't. Nuh-uh, no profit motive for quackery at all. Just pure all-natural goodness like nature intended, naturally, of course.

The conspiracy theorists generally come from the viewpoint of the relationship between Big Pharma and the government. Usually this involves the use of chemtrails or water fluoridation as mind control substances to prepare us to accept the coming New World Order. Either that or they are being used to intentionally keep us sick so Big Pharma can rake in the dough by causing our illnesses and then selling us the cure. The "cancer industry" conspiracy goes even further, including everybody even tangentially involved with oncology.

Due to the law of crank magnetism, these two groups often merge into an unholy alliance of crankery. This is how sites like Natural News, Rense, and that paragon of crankery, Whale.to are born.

The Brave Maverick Doctor is a part of the mythos of woo, anti-science and conspiracist thinking generally. In the usual scenario, a "brave maverick doctor"[42] invents a miracle cure for cancer, AIDS, autism, chronic Lyme disease, malaria, and toe fungus, but this is suppressed by evil Big Pharma and he is hounded by Big Pharma Shills who cause trouble with advertising and medical regulators on the wholly spurious grounds that nobody else in the entire world has ever managed to duplicate the effect of the miracle cure. Large numbers of Brave Maverick Doctors are not doctors at all; many claim the title ND, which stands for "Not a Doctor".

So, yes, pharma sucks. But it's not involved in a scheme to depopulate the planet, put mind control chemicals in the water supply via fluoridation, or suppress cancer cures, as far as we know.