Attitudes towards homosexuality vary between different societies, cultures and organized groups such as religions. The variety of attitudes are often reflected in legal codes, from liberal approaches in countries such as the Netherlands[1] and Canada[2], where same-sex marriage is legal, to ultra-repressive attitudes in countries like Saudi Arabia[3] or Iran[4] where homosexuality is a capital offense.

Christian attitudes towards homosexuality are varied and different Christian groups have radically different interpretations of the same Bible texts.[5] Some branches of the Christian faith will allow gay marriages and the ordainment of gay ministers. However, many Christian conservatives, those detached from reality, and unclassifiable wingnuts use the Bible as a justification of intolerance/hatred/violence towards gays. One biblical quote that is used to justify the repression of homosexuality is:

The death penalty for homosexuality, which was recently introduced in Uganda in 2009 and linked to US evangelicalism,[6] could be biblically justified with the following quote:

However, despite Biblical prohibitions of sodomy, the Bible is relatively vague when it comes to homosexuality. The above quotes could be read to address adultery instead of homosexuality; this helps explain the variety of Christian attitudes to the subject, and how many Christians who self-identify as homosexual are able to reconcile their sexual orientation with their religious beliefs.[7]

Interestingly enough, Jesus' mother Mary was married to Joseph, of whom it is clearly stated that he had two fathers, Jacob (Matthew 1:16) and Heli (Luke 3:23), if the bible is to be understood literally. Since Mary was specially chosen to give birth to the Messiah, and Jesus therefore destined to be adopted by a father who was raised by two men, this may call into question the fundamentalist Christian interpretation of the bible as condemning of same-sex parentage/relationships.

Like Christians, Muslims also hold a variety of views about homosexuality. In many countries under Sharia law, such as Saudi Arabia, Iran, Yemen, and Sudan, homosexuality is punishable by death, and public violence against gays is very common. However, not all Muslim-majority countries criminalise homosexuality. Indonesia and Turkey, both secular republics rather than Islamic theocracies, have no laws against homosexuality. However, society's attitude towards gay people in the aforementioned countries is not quite accepting, with very small portions of their populations thinking homosexuality should be accepted.[8]

The United States, like many Western industrialized nations, is home to a variety of social attitudes on homosexuality. The U.S. only got around to legalizing gay marriage in 2015 in the case Obergefell v. Hodges although not with out controversy. However, many so-called "family values" advocates oppose the civil rights advances that homosexuals have made in recent years, and, as in many countries, violence against homosexuals is still a problem. 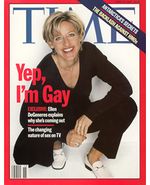 Homosexuals have become more prominent in the media in recent years.

The United States lags behind some other Western industrialized countries in terms of the rights enjoyed by homosexuals. However, public opinion on the question of homosexuality is mixed. A Gallup poll in 2008 showed that about 48% of Americans believed homosexuality was morally acceptable while 48% believed it was not.[9]

There are many states in the U.S. that are considered "gay utopias", where states grant equal rights to homosexuals. These states include Connecticut, Iowa, Massachusetts, Maine, and (formerly) California. California was briefly a "gay utopia" in 2008 when same-sex marriage was legalized, until right-wing nutheads came into play and passed California Proposition 8. Ironically, California is home to the "gay Mecca" of the world, San Francisco.

Some extremists feel that gay rights in United States would lead to gay totalitarianism and destroy democracy, although this kind of hysteria is stirred up by fringe elements.[10]

Attitudes towards homosexuality varies among different ethnic groups. An exit poll conducted showed that 70% percent of African Americans and 53% of Hispanic Americans voted for Proposition 8 while 51% of Asian Americans voted against it.[note 1]

There have been many highly-publicized acts of homophobia in United States, including:

Much of Japanese pop culture, from video games to anime and manga, has homosexuality as a common theme. Japanese society tends not to condemn homosexuality on moral or religious grounds, and the country has no laws against homosexuality; Japan is thought by some to be more tolerant to gays and lesbians than many Western countries.[13] However Homosexual Marriage is still not legal.

Gay marriage in New Zealand has been legalised, in the form of civil unions. New Zealand also has a transsexual Member of Parliament.

In May 2009, Sweden legalized same-sex marriage. [16] Gays and lesbian are also protected from all forms of discrimination in Sweden. [17]

While many Sub-Saharan African countries have laws against homosexuality, South Africa is a unique case. The country legalized same-sex marriage in 2006 [19], although, as is the case virtually everywhere where gay marriage has been legalized, opposition on the grounds of "family values" still persist among parts of the population.

Unsurprisingly, the far-right are not typically fans of homosexuality. In countries where a far-right element is on the rise, such as Ukraine and Russia, persistently homophobic sentiments are prevalent throughout.

Certain people, belonging to the new-wave leftists, have expressed their distaste for homosexuals, whenever it doesn't align with whatever the party line of the day is.[note 2] This phenomenon is perhaps, one of the best examples of the horseshoe theory in action.