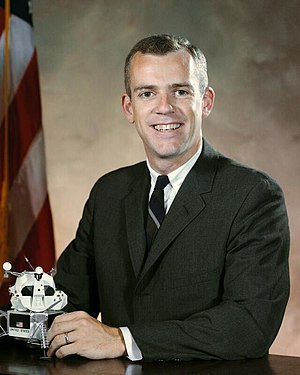 Brian O'Leary (1940-2011) was a NASA scientist-astronaut,[1] recruited as a member of the sixth astronaut group in August 1967. He resigned a year later, without ever flying in space.

He appeared in Fox TV's 2001 "documentary" Conspiracy Theory: Did We Land on the Moon?, which re-ignited public interest in the Moon landing hoax claims. His interview during the show appears to support the hoax claim; later, it turned out that he had been quoted out of context.[2]

In his later years, he became an advocate of the free energy suppression conspiracy theory.[3] He believed that we have been visited by aliens and claimed to have detailed knowledge of their technology, something to do with toroids.[4]

O'Leary relocated to Vilcabamba, Ecuador in 2008 to found the Montesuenos retreat together with his wife, artist Meredith Miller. He died there of intestinal cancer in 2010.

This conspiracy theories-related article is a stub.
You can help RationalWiki by expanding it.
Retrieved from "https://rationalwiki.org/w/index.php?title=Brian_O%27Leary&oldid=1919046"
Categories:
Hidden category: