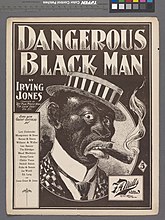 The black brute is a racist stereotype that originated in the post-bellum South of the United States. It survives to this day in something of a muted and less overt form, though it's still readily apparent when employed.[2]

Prior to the Civil War, black stereotypes in the media often portrayed them as dumb and docile, perpetually childlike, willing, or happy-go-lucky servants. Think Uncle Remus in Song of the South or Aunt Jemima, which were based on these earlier stereotypes (these are now generally referred to as the "Tom" and "Mammy" stereotypes respectively, and are something of a spin on the noble savage, although it's also worth noting that people had initially viewed the publication of Uncle Remus stories as an effort to help the black community). While the black brute stereotype, which portrayed black men as ape-like savages ruled by base instincts, was common as well, it became much more dominant over the other stereotypes after the Civil War.

During Reconstruction, the white supremacists in the South developed a gargantuan persecution complex that fruited into various rumors and conspiracy theories. These rumors postulated a variety of paranoid possibilities, including black people stealing all the whites' jobs, loss of white franchise, race war, forced mixing of the races, and the total control of the American government by black people. These were all variations on the persistent theme of a slave or black uprising updated for the Reconstruction era.

The black brute stereotype relied on the two central themes of violence and sexuality. In regard to the former, white supremacists generally believed that black men were inherently physically powerful (an image that was a product of many such men at the time having physiques reflective of grueling manual labor) with a savage and violent nature and that the institution of slavery was necessary to "tame" them. They feared that abolition would cause them to return to their "primitive" state and would lead to mass violence against whites in a race war. Stories of criminal acts by blacks were often exaggerated or outright fabricated by newspapers, which helped perpetuate this fear. New tensions between lower-class whites and freedmen also grew as the two groups now competed for employment. This resulted in a number of racial riots that came on the tail end of the Civil War.[3]

The forced racial mixing narrative became central to the sexual aspect of the black brute mythology. This theory horseshit first appeared in a pamphlet published in 1863 called Miscegenation: The Theory of the Blending of the Races, which posited that Republicans ought to bring about some kind of master race through interbreeding blacks and whites.[4] The pamphlet was later revealed to be a hoax.[5] Anti-miscegenation laws had been in place in many states dating back to pre-Revolution days. While mixed-race marriages were technically legal in some northern states, they were still considered taboo. In the belief that miscegenation was inevitable, many southern states made the penalty for mixed-race marriages or any relationship at all much harsher.

The black brute mythos managed to pack a monumental amount of bigotry into one stereotype. Not only did it rely on racism, but also religious intolerance and sexism. Before emancipation, slaves were indoctrinated into Christianity. This resulted in hoodoo, voodoo, and other folkloric religious practices that fused Christianity with traditional African religions.[note 1] These practices were, of course, considered Satanic, immoral, and a perversion of Christianity by whites. Whites feared that they would be the victims of curses through this "black magic": this is not the origin of that term, though, since it dates back to at least 1200.[6]

As the stereotype portrayed blacks as virile young men, they were believed not only to have sizable endowments but to be extremely skilled in the art of procreation as well. Even if a black man didn't fit this description, it was believed by many of the more superstitious types that they could always increase their strength or virility through magic spells anyway. It was also believed that black people were hyper-sexual due to their "savage" nature and that ages of slavery had repressed this sexual desire, which they would inevitably seek an outlet for. Thus, it was thought that they would immediately target white women and rape them. This was sometimes known as the "Mandingo theory."[7] This also played on sexist stereotypes of the time. As the "weaker sex," women were considered to be easily tempted and possibly unable to resist the sexual advances of virile black men. White supremacists feared that the mixed race would come about through widespread rape and intermarriage of their easily seduced wives and daughters with black people (In reality, white-on-white and white-on-black rape, which was only rarely prosecuted, were far more common). Women were thus idealized as the keepers of white racial purity but simultaneously objectified as helpless pieces of property to be protected. Folk psychology has frequently speculated that fear of retribution for the common sexual exploitation of female slaves by their masters also was involved even among people who did not see such as rape.

The accusation of rape was often the easiest way to stir up a lynch mob, and moral panics over fabricated cases of rape were common. Even the nature of the lynchings themselves was exaggerated in the public perception, which was that almost all lynchings were of rapists: a 1919 study of 2,500 lynchings found that only one-sixth of victims had actually been accused of rape or sexual misconduct.[8] During lynchings, castration was often employed to symbolize the destruction of the black man's sexual powers. The black brute stereotype was a motivating force behind Southern opposition to anti-lynching laws (some 200 of which were rejected in the period between 1882 and 1968) and the persistence of segregation and Jim Crow laws. These laws were thought to be necessary to mitigate criminal violence by black people as well as to keep the maximum distance between them and white women. The rise of the Ku Klux Klan helped this ideology spread and it was exemplified in D.W. Griffith's Birth of a Nation.

While racial theories had existed long prior, the late 19th and early 20th centuries saw the rise of the pseudoscientific field of "raciology" or "scientific racism." This attempted to give a scientific veneer to racism by "proving" the inferiority of blacks and rationalizing their oppression, largely through comparisons claiming that blacks were more "ape-like" than whites. This pseudoscience simply reiterated the brute stereotype.

The brute stereotype is specific to men: in common with typical patriarchal mythology, black women were instead depicted as lascivious seducers (the "Jezebel" stereotype).

The stereotype was often invoked by those who demanded the criminalization of drugs starting with the 1930s "reefer madness" panic.

in 1996 capitalized on the black brute stereotype as a foil for the murders they committed.