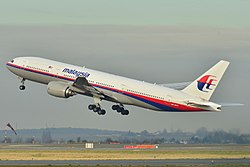 Malaysia Airlines Flight 370 was a Boeing 777 flight that disappeared with all 239 passengers on March 8, 2014, en route to Beijing from Kuala Lumpur. The reason for the disappearance of the flight is still unclear. The resulting multinational search and heavy media coverage made the unexplained disappearance global news. The search was also the largest and most expensive of its kind. [1][2] Naturally, conspiracy theorists swarmed to the incident like flies to a rotten bowl of your Aunt Natasha's goulash.

Flight 370 took off from Kuala Lumpur International at 00:42 on March 8, scheduled to land in Beijing at 06:30. For the first half hour, the flight proceeded as planned. The last communication from the flight occurred at 01:19, when the pilot signed off with Lumpur Radar to transfer communications to Ho Chi Minh City as they entered Vietnamese airspace. At 01:21, Flight 370 disappeared from both Ho Chi Minh and Kuala Lumpur air traffic control's radar, indicating that the plane's on-board transponder had stopped working. The plane remained visible on Malaysia's military radar, which documented the plane suddenly veering left at 01:25. It flew southwest across the Malay Peninsula, where at least two civilian radars may have detected it as it passed by. At 01:30, the pilot of another flight attempted to hail Flight 370 through the international distress frequency. Although he received a reply, the pilot only heard "mumbling" through the static. The plane was last detected on radar at 02:22, when it flew out of the range of the military radar, heading out to the Indian Ocean. Two attempts to contact the plane by phone at 02:39 and 07:13 received no reply, despite the plane's satellite connection remaining active. The last satellite contact with the plane occurred at 08:19, which is believed to be the time at which the plane ran out of fuel somewhere over the southern Indian Ocean. Then, at 09:15, another contact attempt to the plane received no contact, so it is suspected during this 56 minute time was when the plane crashed. [3]

Malaysia Airlines announced that Flight 370 was missing at 07:24, and that the government had initiated a search and rescue operation. What followed was one of the largest coordinated searches in the history of aviation. Australia, China, Japan, Malaysia, New Zealand, South Korea, the UK, and the US all contributed ships and planes to the search; the effort was even crowdsourced when satellite imagery of the Indian Ocean was made public so that people could help look. The search has been ongoing since the day the plane disappeared, with attention only drawn to the Indian Ocean from March 18 until it was suspended in January 17 2017

. As of writing, the search team has managed to locate the wreck of a 19th century cargo ship, but not the plane.

On 29 July 2015, a piece of debris resembling a portion of a 777 wing washed up on the French island of Réunion in the Indian Ocean, thousands of miles west of the search area. On 5 August, experts in Toulouse analyzing the flaperon, as it is called, confirmed that the item was from MH370. More debris — likely originating from Malaysia Airlines' Boeing 777 — was recovered in the following months

To date, the Malaysian government has given little in the way of an official explanation, aside from stating that the plane crashed somewhere in the Indian Ocean and that a final report would be issued by the end of 2017. The conflicting, spotty statements have caused many - especially the passengers' families - to be doubtful. Because of the extensive media coverage, everyone and their dog was speculating on what might have caused Flight 370's disappearance. They will be presented in descending order of plausibility.

suggests that an unresponsive crew maybe due to hypoxia (lack of oxygen) caused by a gradual decompression best fits the available evidence. In this scenario the plane would have flown on autopilot. If the crew did not regain control after the autopilot automatically disengaged due to engine flameout caused by fuel exhaustion, the plane would have crashed into the ocean moments later. However, this does not itself explain why the plane turned round, which remains mysterious. It is interesting to note that Hypoxia

Crew hijacking/Suicide
Flight 370's pilot, Zaharie Ahmad Shah, was reported by coworkers and friends to be going through a period of emotional distress due to his marriage falling apart. A police investigation turned up evidence of strange behavior exhibited by Captain Shah in the final days before the flight. Specifically, he had made no plans after March 8. Because pilots hijacking their own planes - sometimes in order to commit suicide - are unfortunately not uncommon as one would hope (see for example Germanwings Flight 9525), and the anti-hijacking door to the cockpit would have made it almost impossible for passengers and crew to get in once locked out, it is not implausible that Captain Shah may have decided to deviate course by himself. Shah's family vehemently denies that he would do such a thing. An official report in July 2018 claimed to rule out suicide based on analysis of the men's backgrounds and personalities and analysis of voice recordings.[4] However, investigations other than Malaysia's heavily censored ones suggest it was indeed done by the plane's captain.[5]

Regular hijacking
This is the most commonly cited explanation, and was suggested by most mainstream American news outlets. The exact nature of the hijacking is up for debate (with theories ranging from somewhat plausible to absolutely ridiculous). No known terror group has claimed responsibility (save for one open letter claiming to be from a Chinese group nobody has ever heard of), nothing substantial has turned up from background checks of the passengers, and there is no apparent motive. Those who back this theory point to roughly 600 airstrips where Flight 370 could have landed, assuming its trajectory remained consistent, and point to a registered likely manual interruption of the airliner's electrical power. Evidence seems to indicate that the plane was turned around by someone physically operating the flight controls rather than the autopilot or instruments being interfered with, although it isn't clear whether it was by the flight crew or a third party.[4]

Fire
This theory was prompted by an incident in which an EgyptAir 777 aircraft caught fire on the ground, destroying its flight instruments. It postulates that Flight 370 caught fire at some point after takeoff, which burned slowly through the electrical system, causing key instruments to fail, before the plane veered off-course. A lithium battery fire has been blamed by some, although investigators rejected this.[4] Alternatively, it has been proposed that the pilots were attempting to make an emergency landing in northern Malaysia after detecting a fire in the wheel well. However, this latter theory does not explain why the plane would keep on flying out to sea. 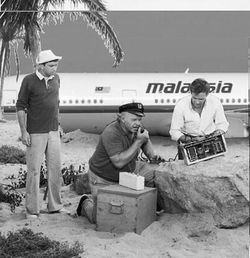 Jihadists
As wingnuts are apt to assume in situations such as these, Rupert Murdoch tweeted that the disappearance "confirms jihadists turning to make trouble for China." He later suggested that the plane might be tucked away somewhere in Pakistan "like Bin Laden." Similarly, a Russian newspaper claimed that the plane had been taken to Afghanistan and its passengers and crew were being held hostage. A terrorist attack could be plausible, but it fails on the grounds that there is no apparent motive, there is no reason to currently believe that the plane went anywhere but out to sea, and again, no known jihadist group has claimed credit for the alleged hijacking (except for the one likely fake open letter).

Cyberattack
In 2007, Boeing admitted to installing an "uninterruptible autopilot" in its 777s as a means of preventing hijackings. The autopilot could be accessed and controlled by air traffic controllers, Boeing, or military contractors. This theory suggests that hijackers, either on the plane or on the ground, hacked into the uninterruptible autopilot and remotely tampered with it, changing the plane's course. Although this explanation is POSSIBLE, it is far from probable, as it would require a fairly intimate knowledge of the autopilot software, and the necessary equipment to hack into it. Tech writer Jeff Wise has suggested that hijackers accessed the plane's systems through the floor of the first class compartment, and subsequently "spoofed" the satellite data to mislead searchers, before flying the plane NORTH to the Baikonur Cosmodrome in Kazakhstan. Note that this idea doesn't explain the incomprehensible response when the plane was hailed on distress channels.

Meeting Dear Leader
The merry blokes on Reddit have suggested that the plane could have been hijacked by the North Koreans, as North Korea was easily reachable with the amount of fuel the plane had. Again, the question here is why? What would Kim have to gain from all this besides risking a war, or at the very least alienating their only friend in the world?

Shot down
A favorite theory of Rushbo and his fans, this theory simply states that someone shot the plane down. Common culprits cited are libruls the governments of Malaysia and the United States. Fans of the theory further claim that the government responsible is deliberately manipulating the search area to cover it up. They probably garbled the communications somehow, too.

Flight 17 was actually Flight 370
This one is fairly self explanatory. It claims that Malaysia Airlines Flight 17 was Flight 370. This idiotic conclusion was reached due to the coincidence that both planes were Boeing 777s operated by Malaysia Airlines (and, perhaps, because each had a "7" in its flight number), and the fact Russia needed to deflect from their puppets murdering 298 people on what turned out to be false pretenses.

A trip to Diego Garcia
Conspiracy theorists allege that the plane may have either landed or been shot down at the island of Diego Garcia. The island is alleged to be the home of a CIA "dark site", an undisclosed location where the agency takes terrorists for detainment and interrogation.

Corporate Espionage
Former Delta Airlines Captain Field McConnell claimed that Flight 370 was seized to gain intel on designs patented by Chinese employees of the Austin-based semiconductor manufacturer Freescale. He further claimed that the paint and equipment on Flight 370 were secret devices produced by Freescale that gave the plane stealth capabilities. Yeah, we had trouble wrapping our heads around this one too.

Black hole
CNN Newsroom host Don Lemon asked whether it was "preposterous" that a small black hole might have materialized in the atmosphere and swallowed the plane. (Yes Don, yes it is.) This "explanation" completely ignores the chain of events leading up to Flight 370's disappearance, not to mention everything we know about how black holes originate and behave.

I'm not saying it was aliens, but it was aliens
A (since deleted) poll on CNN's website recorded 9% of respondents answering that it was "very likely" or "somewhat likely" that Flight 370 was abducted by aliens, time travelers, or "beings from another dimension." If you browse this site frequently, you should know by now that this "theory" can be discarded with extreme prejudice.