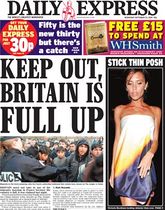 Front page of the self-proclaimed "World's Greatest Newspaper," 23rd September 2009. If Posh gets any thinner we might have room for one more.

"Britain is full!" is the cry of the media of Great Britain. It is a phrase that calmly and eloquently explains why Britain can't possibly take on one more immigrant, otherwise the island will sink for some reason, or that we cannot build on the countryside because there is little left of it. Emotive terms have been formed and liberally used such as concreting over the countryside and urban sprawl. With only about 7.7% of the land settled, we can’t concrete over the countryside even if we wanted to. About two thirds of all new housing is built within existing urban areas with the remainder mainly built on the edge of urban areas. Very little is built on open countryside.

The facts reveal that Britain is actually empty of people, with a surplus of land. Facts show us that we are living in crowded and dense cities, not a crowded and urbanised country. Cramming the population into a small percentage of the land ratchets up land prices by creating an artificial land shortage. The 1947 Town & Country planning act maintains this imbalance of land usage. There is clearly propaganda given out by the British media of immigration and running short of land.

Britain's emptiness can be simply demonstrated by reference to the following handy statistics:[1]

The UK is only ranked in the 50s worldwide; if you count states with at least 9 million people they miss the top 10[7] (beaten by both Belgium and the Netherlands). This poor showing is largely due to Scotland and Wales letting the side down. England particularly beats out Belgium although the Netherlands remains ahead.

But the schools and hospitals are full![edit]

Something that is often linked to this sentiment is the problem of demand outstripping supply for public services such as schools and hospitals, even though this is from cuts, failure to invest in new schools and hospitals, and insufficiently rapid responsiveness of central government funding levels to migration trends, and not to immigration. Indeed, the NHS would collapse overnight without the immigrants who form an essential part of its staff.

Immigrants are scary and dangerous[edit]

Please bear in mind that contrary to popular belief, not every single British person is xenophobic.

The British Isles as seen from space, with the lights being a pretty good indicator of population density. As can be seen, there's still room.

The land cover of Great Britain is 23.5m hectares. Taken from the Office of National Statistics, in 2002, usage was as follows[11]:

Note 1: Many question the accuracy of the above figures as government departments present differing figures. Nevertheless the figures are a good guide.

Note 2: The settled land figure includes gardens and other green spaces, which are estimated at around 5%. When adjusted a figure of only 2.5% of built upon land emerges.