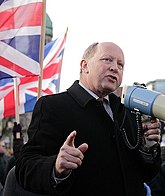 Jim Allister: Your bigoted uncle, and leader of a political party

Jim Allister (1953–) is the lovechild of Alfred Hitchcock a Northern Irish far-right unionist politician who's the leader of the TUV (Traditional Unionist Voice). Since the party was established in 2007, they've only ever managed to get one seat in the Northern Ireland assembly. Perhaps his party's vicious sectarianism and homophobia could have something to do with it.

Jim is the political equivalent of hemorrhoids: All-around disgusting bloody shit, but he never quite goes away.

He previously worked as a member of the Democratic Unionist Party from founding in 1971 to 1987. Unfortunately, he showed back up in 2004 when he returned to the party, but left again in 2007 after the party agreed to enter government with Sinn Fein.[1] Why? Jimmy considers Sinn Fein terrorists due to their links to the IRA.[citation needed] This didn't stop him from working with the UDA in the 80s (which he now supposedly regrets[2]) or admitting to his party a guy who held a gun to a Catholic citizen's head.[3] Or: It's only terrorism when it's republican! Accordingly, he whines about the IRA on a daily basis but he nonetheless awkwardly attempts to defend the Israeli government killing innocent Palestinians in a debate with George Galloway[4](Jesus Christ, Jim! Get a job in something you won't embarrass yourself in).

Jim also spends a lot of time being angry that it's not the 11th-century anymore, he's opposed to virtually any form of equality. Allister supported Ian Paisley's "Save Ulster from Sodomy" to keep male homosexuality illegal. When asked in 2013 if his views had changed on LGBT equality, he admitted he wished homosexuality was still illegal.[5] He was also delighted when he heard about Uganda's campaign to give LGBTQ people life imprisonment sentences and even the death penalty.[6]

Unsurprisingly, Jim is also a creationist.[7]

Jim only tends to favor freedom of speech when it lines up with his agenda. When a nutcase called Islam "the spawn of the devil" and "Satanic", Jim ran to his defense (being a fellow Islamophobe).[8] However, when a liberal held up a sign at a gay pride parade saying "Jesus had two dads and he turned out just fine", he lost his shit.[9]

Jim regularly praises Donald Trump[10] and even stole Trump's "Drain the Swamp" catchphrase in the 2017 Northern Ireland election.[11] Of course, like most Trump-related ideas, it was idiotic beyond nine tenths of reality. Surprising absolutely nobody, he failed once again. Good luck next time, Jimbo. Maybe if you try real hard not to yell at any homosexuals you could get your high score up to two seats!