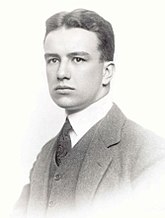 Buckminster Fuller (1895–1983) was an American architect and futurist best known for inventing the geodesic dome, and some terms and concepts popular among hippies, environmentalists, and New Agers.

He was a brilliant fellow whose stuff generally worked pretty much as designed, though often with impracticalities (e.g., the Dymaxion car was horribly top-heavy, geodesic domes are hard to seal) or just way too far ahead of their time (e.g., houses and house parts stamped out of single pieces of metal). He didn't get filthy rich, but he did burn his name into history remarkably well for a nice fellow just being very smart.

We have old Bucky to thank for such terms as "synergistics" and "spaceship Earth." 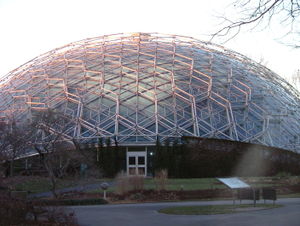 The Climatron greenhouse at Missouri Botanical Gardens, built in 1960.

The geodesic dome is a roughly hemispherical structure built with a shell constructed in a polyhedron form. Being made entirely of triangles, the structure is very robust and requires no internal supporting pillars.[1] Fuller developed and patented the dome after World War II and wanted to popularize it as a cheap, practical way of solving the postwar housing crisis and providing inexpensive, easily built homes that could be plopped down on any lot.[2]

Instead of course, trailers filled this role (at least in the United States). Just think how different the West Virginia and Arkansas landscapes could be today with geodesic domes all over the place instead of trailers, but alas, it was not to be.

has less distortion of relative size of areas, most notably when compared to the Mercator projection

; and less distortion of shapes of areas, especially compared to the Gall–Peters projection

Scientists named a form of molecular carbon after him, the "fullerene," so named for its resemblance to the geodesic dome (and the reason for their nickname, "buckyballs").[4]

His full namesake, Buckminsterfullerene (C60), has a chemical structure that looks like a soccer ball, has been detected in deep space,[5] and is one of the largest particles in which wave-particle duality has been observed.[6] Thanks, Bucky!

Geodesic domes found a niche market at such places as World's Fair sites and amusement parks (Disney's Epcot Center has one named, of course, "Spaceship Earth") where they fit with the generally futuristic architecture themes. Popularized among the hippie crowd by such people as Stewart Brand and his Whole Earth Catalog, geodesic domes started popping up like mushrooms in hip New Age enclaves like Drop City

Buckminster Fuller fell in with that set and with the Human Potential Movement, becoming close friends with a number of people like Stewart Brand and Werner Erhard, in the process popularizing a form of futurism laden with equal parts science and woo. The concept of a "spaceship Earth" gained popularity among some environmentalists and drug-addled rock bands like the Jefferson Starship.

In 1977, Buckminster Fuller, along with Werner Erhard and John Denver, founded The Hunger Project, which is supposed to end world hunger by bringing about a "paradigm shift" in which people get over their guilt over world hunger without actually doing anything about it.

By the 1980s, even Brand was admitting geodesic domes were a bit crap in practice. Specifically, they turn out to be really hard to seal properly, and, sadly, they are not very efficient uses of living space.