From RationalWiki
(Redirected from Futurist)
Jump to: navigation, search

Futurism, or futurology, is the study, or hypothetical study, of what might become of the human race and our relationship with technology and our environment. It is quite often difficult to discern between the realistic, the science woo, and the science fictional elements of the works of futurists.

The first use of the term "futurism" appeared during the early 19th century in reference to a specific brand of Christian eschatology that teaches that many parts of the Bible, especially the Book of Revelation, will take place in the future.[1] Obviously, futurism still holds some influence in modern Christianity considering all the cranks still banging on about the end times.

The term "futurist" was not explicitly used in reference to a number of the 19th century science fiction writers such as Jules Verne and H.G. Wells, though modern futurists claim to draw inspiration from them.[2] 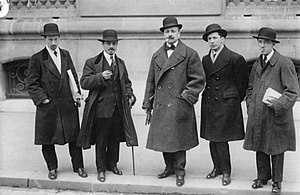 The original futurist movement was born in early 20th century Italy which was known for exalting art, technology, and violence. One of the key documents of the early futurist movement was The Futurist Manifesto, published in 1909 by Filippo Tommaso Marinetti.[3] This positioned Marinetti as the leader of the Italian futurist movement and eventually the head of the Futurist Political Party formed in 1918. Many of the futurists were also Italian nationalists and became fascist ideologues and supporters of Benito Mussolini.[4]

One of the many strains of futurist music (see the next couple sections) came out of the Italian movement. Musician Balilla Pratella (1880-1955) wrote an article Manifesto of Futurist Musicians[5] in 1910. In it, he addresses young musicians (because "only they can understand what I have to say"), encouraging them to ditch commercialism, academia, closed competitions, critics, sacred music, librettist/composer partnerships, vocal centrism, and quite a few other things he believed were holding back musical innovation. Typical of the movement, Pratella adopted a vitriolic tone, never taking a moment's breath to stop painting the "traditionalists" as mortal enemies of music.

Pratella was forgotten over time and 20th-century classical music lived on, although the band Art of Noise and the record label ZTT[6] were named after Futurist concepts.

Modern futurism came to be characterized as being more scientific (or scientistic, as some might say) while still retaining its artistic elements. Ossip K. Flechtheim called for a field of "futurology" beginning in the 1940s an attempt to "scientifically" predict the future based on history.[8] Future Shock, by Alvin Toffler is known for being one of the most influential popularizations of futurism. Nowadays the field is rife with anyone who can get the media to call them futurists. 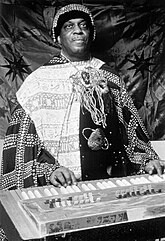 Futurist themes were embraced by a number of African-American artists, especially musicians, in the mid-20th century. This style eventually came to be known as "Afro-futurism." Sun Ra, a jazz, pianist, and bandleader, is known as the progenitor of this style.[9] A number of other musicians have become associated with Afro-futurism, including Parliament-Funkadelic, Model 500 and DJ Spooky.

See the main article on this topic: Transhumanism

The current incarnation of futurism is known as transhumanism, a somewhat loosely knit movement that has gained a few wealthy financial benefactors in Silicon Valley. Many transhumanists are "Singularitarians" who posit a coming "technological singularity" in which an artificial intelligence is built that exceeds human intelligence and initiates an explosion of technological advancement. Transhumanists are also proponents of pseudoscientific, dubious, or otherwise problematic technology, such as cryonics and mind uploading. Ray Kurzweil is probably the most famous transhumanist around today.

The movement that came to be known as "cyborg feminism" or "cyberfeminism" takes its inspiration from Donna Haraway's 1985 essay "A Cyborg Manifesto." Haraway rebutted the idea that science and technology are inherently patriarchal or capitalistic. Cyberfeminism tends to concentrate on the intersection of gender roles and technology.[10] Another movement with some overlap with cyberfeminism is "postgenderism," which advocates for technological advances in service of erasing gender (and sexual dimorphism, too).[11] Both of these movements also have some overlap with transhumanism.

There was a strain of 1980s electronic synthesizer pop of this name, which they got from the Italian ones. It went "ZOMG MACHINES EXIST" in a new wave sort of manner with silly haircuts and eyeliner. Examples include Visage and Depeche Mode. In the early 2000s, industrial bands VNV Nation and Apoptygma Berzerk invented the name "futurepop" for their version of this.[12] Even more confusingly is a resurgence in 1980s-sounding synth-music thanks to films like Drive and videogames like Hotline Miami with a number of names, like "Synthwave" or "Retro-Synth."[13] So "future" means "retro," except…

leading to styles such as "steam punk" or "diesel punk." The subreddit /r/RetroFuturism is dedicated to sharing examples of pretty pictures with this aesthetic.