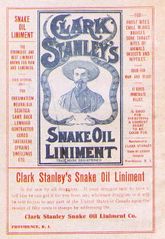 Vintage advertising for a "snake oil liniment", listing some of the conditions it was touted as a treatment for. When tested by the government in 1917, this product was found to contain no genuine snake oil at all.

Patent medicine typically refers to unproven remedies sold by traveling salesmen in the nineteenth and early twentieth centuries. They were sometimes also referred to as "snake oil" remedies.

Much of the same criticism applies to the 20th and 21st Century phenomenon of the "miracle cure" (examples including Miracle Mineral Solution, BX Protocol and Antineoplastons, which are claimed to cure a wide range of serious and fundamentally different diseases without benefit of credible evidence).

These terms are still used today to describe the various substances of unclear efficacy sold for a profit through advertising. These cures are not always sold by malicious, deceptive con-men. Many promoters are true believers, making their claims even more convincing.

Patent medicines date at least from the 17th century. Peddlers were originally called mountebanks, and their quackery was so great that that word now solely means “fraudster” with the original specificity forgotten.[2]

During the nineteenth and early twentieth centuries, traveling "medicine shows" often promoted patent medicines in rural America - hucksters would proclaim the alleged miraculous benefits of these tonics between musical acts, freak shows and other entertainment. Later such preparations were often advertised on radio shows.

The term "snake oil" originates from this era. Genuine snake oil is a folk remedy used in traditional Chinese medicine, and one could buy it in the Chinatown areas of several large American cities. Patent medicine producers picked up on the idea and began producing their own "snake oil" products, although few if any of them contained genuine snake extracts.

Coca-Cola originated in 1885 as a patent medicine, touting the benefits of wine (removed from the recipe in 1886 due to local prohibition laws), carbonated water and (until 1903) cocaine. Its inventor, John Pemberton, claimed that the drink was an effective treatment for various conditions, including dyspepsia, headaches, impotence, and morphine addiction. 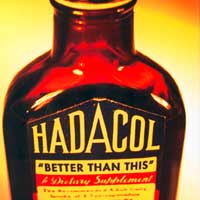 Possibly the most popular patent medicine of all time (discounting Coca-Cola, which long ago abandoned all medical pretenses) was a short-lived concoction called Hadacol, cooked up by Louisiana state Senator Dudley J. LeBlanc in 1950. The "tonic" contained some B vitamins and iron, plus a 12% alcohol "preservative", which made it a popular source of booze in dry counties. Hadacol was heavily advertised throughout the south, with radio endorsements by entertainers such as Hank Williams, and even had a promotional caravan, often regarded as the last of the travelling "medicine shows",[3] but ultimately went bust by the end of 1951, due to huge advertising and tax debts, and due to a federal-court decision ruling that the manufacturers' claims that Hadacol was "an effective treatment and cure for scores of ailments and diseases" were patently false and misleading. The name lives on as that of a Missouri-based Country Rock band.[4] 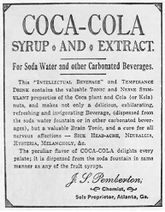 Original 1885 advertisement for Coca-Cola, promoting its "nerve stimulant properties" as a cure for "hysteria", "melancholy", and other conditions.

How to spot patent medicines[edit] 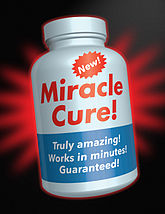 Advertisements and labeling for patent medicines will often feature a "Quack Miranda Warning" in the fine print.

In the 21st century United States, they are conveniently labeled with statements such as "This product is not intended to treat, cure, or prevent any disease" or "These statements have not been evaluated by the FDA".

Other countries with functioning government regulatory systems might have similar labeling; in countries that don't, you'll have to use your own bullshit detector.