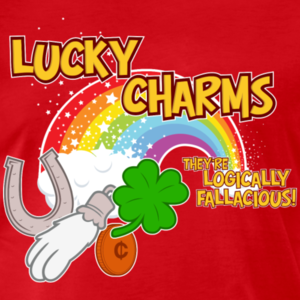 It's possible that they cause good luck; as luck would have it though, it's damn unlikely. (Source)

An appeal to probability argues that, because something probably will happen, it is certain to happen.

The fallacy is an informal fallacy.

The argument, when expressed, usually takes the form:

However, the argument relies on the form:

The fallaciousness of this line of logic should be apparent from the second, unstated premise (P2), which seems and is blatantly false.

This form argues that, merely because something is possible, it is certain to happen.

Conversely, the appeal to improbability argues that, merely because something is improbable, it is impossible.

The appeal is based on a faulty premise — that probability/possibility are the same as certainty, or that improbability is the same as impossibility. There is no support for this premise, anywhere.

Another way of looking at this is through game theory. Game theory states that the value of something is equal to its probability times its worth. For the lottery example above, let's say the lottery pays out $5,000,000 (a tempting sum) and costs $10 (a trifle). Is it worth it? If we accept the appeal to probability, then of course! According to the appeal to probability, if there's a 0.0001% chance of winning, that's the same as a 100% chance of winning. Yet this is not borne out by the evidence. Your realistic expectations of gain are laid out in the table below:

Buying a ticket, on average, loses you $5.

The law of large numbers supports this — if you played this lottery an infinite number of times, you would on average win only 0.0001% of the time.

An example of the appeal is Murphy's Law — if something can go wrong, it will. (This is more an example of unending pessimism rather than a logical argument, so it doesn't quite count).

Dave: Did you know that Jesus was gay?
Tim: And why do you say that?
Dave: You have to admit, it is possible!
Tim: So is the fact that you are a moron.

The second major set of exceptions is when something truly is either certain or impossible. If something has a 100% chance (a certainty) of being true then necessarily it will happen. The opposite is true for something that has a 0% chance (an impossibility) of being true. These cases are usually only found in formal logic and mathematical proofs, where a set of axioms are assumed to be 100% true, for the purpose of argument. So, in truth, these results are "certain" or "impossible" only within the bounds of the axioms that support them.

The third major set of exceptions are risks which, if they ever came true, would pose such a large threat that they should be avoided at all costs (or at least, have their probability reduced as far as possible) — even if there's only a chance that they occur.

Essentially, one must use game theory again: even a very small probability of a very bad event is sufficient to make it very important.

One example is a concussion: repeatedly ramming your head into a wall isn't certain to give you a concussion, but it's not worth the risk (the benefits don't outweigh the harms). Another is nuclear war: because it could possibly (though this is unlikely) kill everyone on the planet, it has been argued that no other goal takes higher priority than reducing the risk of nuclear warfare. Unfortunately, our politicians have not taken the same attitude to anthropogenic climate change and other environmental degradation, even though it is far more likely to cause the collapse of modern civilization than nuclear war ever was.

One counterexample is that of a small meteor strike: simply put, the real (nonzero) possibility that a small meteor will strike your house while you sleep does not warrant your concern, because [1] there is nothing you can do to stop said impact and [2] the impact of such an event would be relatively small.[3]