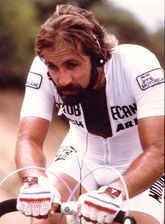 Shermer says: get on yer bike!

He is a noted "skeptical agnostic non-theist," the author of many writings on skepticism, and the founder of the The Skeptics Society.

During adolescence Shermer became a born again, fundamentalist Christian and later even got a theology degree at a Christian university. Later still Shermer studied psychology and became more skeptical about Christian belief, finally becoming an atheist/agnostic/skeptic.[1] Shermer stated the final end of his Christian faith was when a girl was paralyzed in a motor accident. Shermer prayed to God to heal her. She remained paralyzed.[2]

Like Paul, Shermer found his way on the long (bike) road to Damascus Mt. Elbert, in Colorado, when he realized that all the pseudoscience, (prayer, New Age pyramids, meditation, and homeopathy) would not take the pain of 10 years of cycling away, and that these remedies and the philosophies behind them were bunk. Like Paul, Shermer began to preach and teach, writing for Scientific American in the Skeptics column, writing books like Why People Believe Weird Things: Pseudoscience, Superstition, and Other Confusions of Our Time[3] (as well as the far more exciting Cycling: Endurance and Speed[4]), and lecturing across the US on topics ranging from Holocaust denial to creationism (which he aptly calls Evolution Denial).[5]

Useful comparisons to John, George, and Ringo are less forthcoming, however.

Shermer's recent spooky experience with a radio initially suggested he was wavering in his commitment to skepticism. This was later shown to not be the case.

Shermer leans heavily towards libertarianism and is known to be less than introspective where economic issues are concerned; occasional hilarity results with the rest of the skeptical community (one incident featured a thoroughly inept attempt to map economic freedom onto the Kardashev scale

While Shermer's other work has been well received, his book Mind of the Market has been widely criticized in skeptical circles for being mostly full of bullshit pop evolutionary psychology used in order to rationalize his libertarianism.[7] The book is also considered overly emotional and insufficiently logical.[8] This has led some to say there are "two Michael Shermers," "skeptical Shermer" and "libertarian Shermer." Others contend he never really stopped drinking the Randroid Kool-Aid. Of course, he has denied these charges.[9]

Shermer argued that science denialism exists equally on the left as on the right. Chris Mooney took issue with this in two articles that Mother Jones published. Mooney has shown that, for example trying to include unscientific ideas in mainstream education is a problem among Republicans rather than Democrats. Higher proportions of Republicans believe creationism and deny global warming than do Democrats. Vaccine denialism and suspicion of genetically modified food affect Republicans and Democrats equally (though vaccine denialism is forming a right-wing face). Mooney cites Michele Bachmann and Donald Trump as prominent conservative vaccine "skeptics". Decades of research show that conservatives tend more to resist new ideas and have a greater need for beliefs which they subjectively feel are unchanging and certain.[11][12] Science by contrast frequently challenges traditions previously considered certain. Just 6% of American Association for the Advancement of Science members are Republicans.[13] [14]

One of Shermer's longstanding opponents in the skeptic community has been PZ Myers, who wrote several blog posts personally critical of Shermer, arguing that he was egotistical,[15] sexist,[16] and irrational.[17]

In March 2016 Shermer seemed to endorse Donald Trump for president of the U.S.[18] Later Shermer corrected himself and admitted he gave disproportionate credence to "snippets from an interview". He just "liked some aspects of Trump (...) [Shermer has] since grown concerned about some of Trump’s other positions, however (...) [Shermer is] not publicly endorsing anyone".[19] This serves to underscore the fact that Shermer, not unlike any intelligent human being, is at great risk of sometimes being swayed rather much by his emotions.[note 1]

On August 8, 2013, PZ Myers posted a message on his Pharyngula blog at Freethought Blogs from an unnamed woman later identified as Alison Smith claiming that Michael Shermer had raped her.[20] Smith alleged, "at a conference, Mr. Shermer coerced me into a position where I could not consent, and then had sex with me." She also stated that "I reached out to one organization that was involved in the event at which I was raped, and they refused to take my concerns seriously," that "5 different people have directly told me they did the same to them," and that she was sharing this information in order to warn others. Myers later updated his blog entry with an account from another woman, who claimed that Shermer plied her with drink at an atheist event and "was very flirty."

Assuming the above accusations are correct, did Michael Shermer need help to understand the distress involved?[21] Before the PZ Myers grenade exploded Shermer understood the harm rape and adultery causes. He wrote the following in Feb 2013.

Double standard suspected anywhere? Or perhaps the power of wishful thinking enticed him into the conviction that only forcible incidents count as rape.

Bloggers in the atheist/skeptic/feminist community reacted quickly and took sides. It soon became the blogosphere's drama of the week, rehashing many of the divisions endemic in the atheist community since the "Elevatorgate" affair.[23][24][25][26][27]

Shermer denied any wrongdoing and issued a cease and desist order against Myers, threatening defamation action unless Myers removed the offending blog entry and issued a full retraction and apology.[28]

Shermer got legal funds without asking on a fundraiser page built by Emery Emery, the “Ardent Atheist”.[29] The fundraser included a rape joke with generous contributors offered a bottomless glass of wine, with Emery “who will not be drinking but keeping your glass full.” This was a reminder that one woman complained Shermer repeatedly refilled her glass. Myers also got an offer of legal help from Popehat who is experienced with online libel trouble.[30]

The fundraiser for Michael Shermer’s legal action raised a total of $8,289. Emery Emery stated that Shermer “has no choice” but to sue PZ because the post was still up. By August 9th, 2014 the statute of limitations in California ran out without Shermer suing Myers.[31] As of 2018 the rape allegation is still up.[20][note 2]

Things blew up after 11-Sept-2014, when NY Times contributor Mark Oppenheimer wrote a very long, detailed highlights-reel on the harassment campaigns being run within the atheist and skeptical movements, including naming three victims of Shermer’s alleged predations. This piece alone contains several bombshells which had not been public before Oppenheimer's article appeared, including:

Adam Lee accused Randi and others of working to silence Shermer's critics; further, Lee accused some of trying to pressure victims into silence. Lee compared this to Roman Catholic and other religious organizations that seek to cover up other wrongdoing, notably predatory sex by their members. Lee accuses some atheists who condemn religiously motivated coverups while acting similarly of double standards.[33]

Emery Emery gave the money from the fundraiser to Shermer’s lawyers, which, since they didn’t sue Myers, leaves the fate of those funds in question. What did they pay for, and/or how much was returned to Shermer or Emery? Was any returned to the donors?

Shermer has been accused of overlooking important evidence in his attempt to analyze a large find of 'homo naledi' bones in a cave. He suggested murder or sacrifice. John Hawkes suspects Shermer failed to read the published work carefully as there is no evidence of violence in the bones. Hawkes suspects Shermer's copious study of the dark side of human nature led him to overlook other possible explanations for the bones being in that cave[34] and PZ Myers wonders why the Scientific American keeps him as a columnist.[35]

Shermer wrote how in 2014, he tried unsuccessfully to restore a transistor radio that had belonged to the deceased grandfather of his new wife and among other things, installed fresh batteries. He stashed it in their bedroom, located at the back of their home. Three months later, the radio "inexplicably" started playing just when his wife needed grandfatherly reassurance. This mysterious event 'shook [Shermer's] skepticism'; he appeared to hint that he was "keeping an open mind" about the possibility of supernatural influence.[37] Later Shermer seemed to backpedal by rejecting the supernatural and reaffirming his skepticism.[38]

Did Michael Shermer weigh up the evidence carefully and follow the scientific method over the radio? Below are some points that he could do well to consider.

To vintage electronics geeks, old transistor radios with "intermittent" circuits are no mystery at all. Varying humidity, temperature and mechanical movement on old copper contacts found in switches and battery compartments, as well as the effect of aging capacitors and resistors on circuits, are well-known causes of maddeningly intermittent functionality. Tiny temperature-induced contractions or expansions of small metal or plastic parts over time can cause otherwise dead circuits to come to life suddenly.[39][40] Yet, to the uninitiated, this well-understood but arcane electronic quirk resembles magic.

Jerry Coyne regrets that Shermer made no attempt to get more evidence, for example by looking into the radio. Coyne further reprints a post which includes, "It would be mildly interesting to have an electronics expert determine exactly what is wrong with the radio."[43] Since Shermer and his wife did not provide the radio for investigation we will quite likely never know if there was more to it than a 1970's vintage radio.

Readers are invited to answer this for themselves.