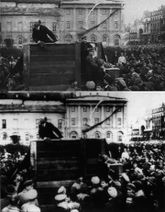 Burning the evidence is a common activity among criminals, some governments and government agencies, some wiki encyclopedia administrators, and other people that need to hide something. It covers any attempt to destroy evidence — "burning" is just a figure of speech. In the field of law, destruction of evidence by any party to a case is considered a serious offense, known technically as spoliation, an expression of consciousness of guilt.[1]

The burning of evidence has a well-known history. It is perhaps at its most notorious when some entity (such as a government) attempts to remove from the historical record the memory of some event that actually happened. This goes back at least to the ancient Roman concept of Damnatio Memoriae

— all references to a person ever having existed are removed from the record. (The fact that cases of this are well-documented shows how ineffective the process can be.)

A well-known instance of governmental burning of evidence was the behavior of the Stalin regime in Soviet Union, which attempted to remove a number of people from the historical record, including hilarious creepy doctoring of photographs.

This activity has a famous reference in literature. George Orwell's famous work Nineteen Eighty-Four describes a totally despotic and totalitarian government that controls the population by, among other things, controlling the language and controlling all information. People and events are routinely expunged from the historical record. Such people become, in Orwell's "newspeak" language, "unpersons." In the government agencies where information is destroyed, the receptacles into which documents are placed for expunging are called "memory holes," a term which has become synonymous with the destruction of information.

On another level, the Nazis literally tried to burn the evidence of their concentration camps to hide them from the approaching Allied forces during the last days of World War II. The sheer size and scale of the Holocaust meant that their efforts were mostly in vain, however, and plenty of incontrovertible proof remains that they existed and were responsible for the deaths of millions of people. Predictably enough, some conspiracy theorists still don't think it happened.