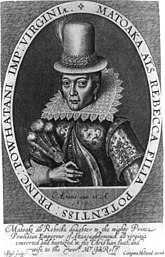 Pocahontas (c. 1595–March 1617) was a Native American from the tidewater region of what is now Virginia. She was the favorite daughter of Powhatan, who ruled the loose confederacy that gave him his name.[note 1] Pocahontas was a nickname; Native Americans often had several names and she was also known as Amonute and Matoaka.[1] She is perhaps best known for her "rescue" of English soldier and colonist John Smith

who was allegedly about to be killed by her father: an event that many scholars argue was misunderstood by Smith, or perhaps, never occurred.

John Smith appears to have changed his story about his travels in North America several times, notably in 1616 when Pocahontas and Rolfe were due to meet Queen Anne of Denmark (wife of James I of England/VI of Scotland), perhaps to make Pocahontas seem more important. His 1608 account doesn't mention her presence at the critical incident when he was either held captive by Powhatan or they had a chat over dinner or something, but in 1616 he portrayed her as a hero who saved his life, and his 1624 history adds even more fluff.[2]

Jamestown was founded in 1607 and Pocahontas was instrumental in providing food to the colony in its earliest days. In 1610 the English abducted Pocahontas and held her hostage aboard ship in an effort to insure her father’s good behavior toward them. During her captivity, she “converted” (there is some dispute as to the sincerity of her conversion) to Christianity and was renamed Rebecca. She subsequently married John Rolfe, a colonist who was instrumental in the economic salvation of Jamestown when he introduced a hardy, flavorful strain of tobacco.

Pocahontas bore a child by John Rolfe, one Thomas Rolfe. She traveled to England with Rolfe, where she was introduced to court. She took ill just as the Rolfes embarked to return to America. Her exact cause of death is unclear: it is blamed on various popular diseases of the time such as tuberculosis, pneumonia, dysentery or smallpox, but there are also claims that she was poisoned. She died in Gravesend, Kent, aged around 22, and is interred there. She left her son Thomas, who was raised in England but aged 20 headed to the new world and became a tobacco farmer.[3]

She is the subject of a few stunningly inaccurate movies, not the least of which is Disney's rather frightening (in terms of historical accuracy) portrayal. But Disney's portrayal was hardly the first to go the pseudohistory route (though Disney at least owned up to it). Because she is an ancestor of most of the First Families of Virginia[4] and because later Americans did not want to acknowledge the acts of any non-white person in their history, Pocahontas's story was greatly romanticized, to the point where some[note 2] insisted that she must be white, thus leading to such absurd claims as that she was the daughter of Virginia Dare

,[note 3] who was born in the Roanoke colony in 1587 but lost to historical record along with the rest of the colonists by 1590.[note 4] There are supposedly more than 100,000 descendants of Pocahontas.[5]

When the State of Virginia attempted to define race in attempting to ban miscegenation in 1924, the legislators realized that they had to carve out an exception known as the "Pocahontas Exception", which allowed legally-white people to be up to 1/16th Native American, but still only 0% black. This was because many of Virginia's most prominent families were (or at least claimed to be) descended from both Europeans and from Pocahontas.[6]

The subject seems attractive to filmmakers with its combination of scenery and exotic young lady.[1] Most rather elide the fact that Pocahontas was around 13 when John Smith arrived for the big romantic scenes.