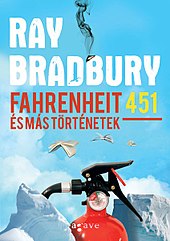 Front cover of a Hungarian translation.

Fahrenheit 451 is a dystopian novel by Ray Bradbury set in a not-so-distant future where everything potentially offensive is outlawed and people are hopelessly narcissistic. In this world, firemen do not put out fires, but start them, burning books and the houses where the books are hidden. One fireman, Guy Montag, is an enthusiastic servant of the system until events push him to question his beliefs. The name originates from the fact that book paper burns at around 451 degrees Fahrenheit, and it's snappier than Celsius 233.

Written in 1953, it was meant as a critique of American pop culture, which Bradbury saw as anti-intellectual and dangerously hedonistic. Bradbury's vision took this to an extreme, creating a world where the general population had come to believe that anything intellectually challenging was more trouble than it was worth, and thus anything even remotely controversial was to be destroyed.

See the main article on this topic: Censorship

In the book, the censorship originated from "minorities". Not ethnic minorities per se, mind you, just any and every tiny group of people who felt that not only should they never be offended, no one should ever be allowed to read the offensive parts. Cat lovers didn't want any bad depictions of cats in literature, so anything that showed cats in less than perfect light were removed. White people didn't like their depiction in Uncle Tom's Cabin, so that got removed as well. Anyone with any sort of agenda would complain, and it was removed, until absolutely nothing was left except for instruction manuals and porn. Of course, we learned from this and we'd never be so foolish as to self-censor because some group of people claim a right never to be offe… OH DAMMIT WE DID DIDN'T WE?!

Later readers have generally seen the book to be a cautionary tale against any form of censorship against unpopular ideas, of which Bradbury's original scenario of censorship by mob rule is only one of the more insidious forms. Bradbury himself asserted that the novel is about the dangers of television.[1] One class of college students told him he was wrong about the thesis of his own book after he gave a lecture on it, causing him to leave in a huff.

The book has been adapted into various formats including:

See the main article on this topic: Irony