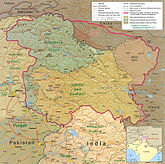 Kashmir region and the various zones of occupation. Note that many people in each occupation zone would prefer to be occupied by someone else.

Kashmir is the northernmost region of the Indian subcontinent, where the world's first-, second-, and sixth-most populous countries are all wedged into each other. It is currently occupied by three nations. Jammu and Kashmir are controlled by India, Azad Kashmir and Gilgit-Baltistan are administered by Pakistan, and Aksai Chin and the Trans-Karakoram Tract are occupied by China.[2] Being a large and diverse region, India has several hot spots, but none is so persistent as the disputes over Kashmir.

After spending centuries being tossed around like a football between Hindu, Muslim, and Buddhist rulers, Kashmir was annexed by the Sikhs. The Sikhs, in turn, came under the rule of the British Empire, becoming one of the princely states which comprised the Raj. This lasted until 1947 when the British Raj was divided between Muslim and Hindu majority areas. India and Pakistan both claimed Kashmir. The region is still disputed, and it's a big part of why India and Pakistan hate each other. Unfortunately, both countries have nuclear weapons.

When India and Pakistan won independence in 1947, Muslims and Hindus largely went their own ways in their respective countries. However, areas with religiously diverse populations had to actually pick a team. One of those princely states was called Jammu and Kashmir, which had been annexed by the British after the First Anglo-Sikh War.

The state's ruler, Maharajah Hari Singh, preferred to take a stab at remaining independent of both, and to this end, he played the diplomacy game to bounce the big boys off of one another.[3] This didn't work out as he hoped. Kashmir's Islamic majority rose up in rebellion almost immediately, and Pakistan's Pashtun tribesmen decided to settle the issue by hopping across the border to take that shit for themselves.[4] Singh asked India to save him, and the Indians only responded on the condition that he join their country. India sent the troops, and the world got the First Kashmir War.[5] A little over a year (and five thousand corpses) later, the UN managed to mediate a truce that created a "Line of Control" between Indian and Pakistani forces.[6] Having come away with two-thirds of Kashmir, India decided they won.[7] No one claimed the Siachen glacier because why the fuck would anyone want a useless chunk of ice at an altitude where no one can breathe? Just wait.

After the Chinese Civil War, Mao focused on stomping into Tibet.[8] Tibet had previously claimed part of Kashmir, called Aksai Chin, and the Chinese decided they'd like to have that bit too, thank you very much. After India granted asylum to the Dalai Lama, tensions flared,[9] and the lack of a settlement over the territory led to the Sino-Indian War

in 1962. After another five thousand dead people, China declared a unilateral cease-fire. India still claims Aksai Chin, but they seem prepared to accept the loss,[10] probably because Aksai Chin is an arid goddamn salt flat.[11] To screw them a bit more, India's two enemies signed the Sino-Pakistan Agreement,

where the two countries traded some land and did a high five.

Still coveting that sweet, sweet land in Kashmir, Pakistan took a shot at sending spies and soldiers to infiltrate the Indian zone and attempt to spark a Muslim uprising.[12] This naturally sparked yet another goddamn war in the region in 1965 when India retaliated by invading the Pakistan zone. With the world powers no longer distracted by other affairs, the conflict evolved into another Cold War proxy fight between the USA and the USSR. Despite the modern American opinion of the two countries, the USA supplied aid to Pakistan — a relatively moderate Muslim state and anti-communist to boot — while the USSR supplied India, honoring its unlikely alliance with the democratic, heavily capitalistic nation.[13] The UN once again mandated a cease-fire. Kashmir fell back into geopolitical limbo.

In 1971, India and Pakistan decided to go for round three. This time, the war had its roots outside Kashmir. A disputed election in Pakistan resulted in East Pakistan declaring independence and calling itself Bangladesh. The war also involved the 1971 Bangladesh genocide,

where Pakistani forces slaughtered between 300,000 and 3,000,000 Bengalis and raped hundreds of thousands more. When the Bengalis asked for Indian assistance, India gladly took the chance to screw over their longtime foe by training and arming Bengali fighters. Pakistan retaliated by launching an air attack against Indian airfields.[14] Fought mostly between navies and air forces, the war resulted in an outright Indian victory,[15] forcing Pakistan to concede Bangladesh and ending any semblance of parity with India.[16] However, the victory did not translate into a material gain for India because the Kashmir issue remained unsettled - partly because Pakistan's leader warned the Indian diplomats that chaos and a "Versailles Syndrome" would result if India treated his country too harshly, but mainly because Tricky Dick threatened to intervene if India went any further.[17][18][note 1] Once again, Kashmir fell into political limbo. 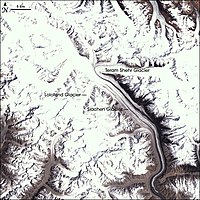 The sexiest goddamn glacier in the world, apparently.

Now the Siachen glacier enters the story. The glacier wasn't handed to either country through all of this madness because, again, who would want it? However, US maps put it in Pakistan's territory for convenience, and mountain climbers tended to ask their government for permission to explore.[20] However, in the late 1970s, India decided to go poking around Siachen, and Pakistan noticed. Then Pakistan shat a brick. Both countries agreed that a glacier three miles high was a vital military victory point. The Pakistanis flew a permanent military garrison, and India found out when their military ordered winter clothing from the same British store where Pakistan was buying their stuff. No, really.[21] The two countries have been skirmishing over the glacier for years, but more soldiers have died from avalanches, exposure, and oxygen deprivation. The death toll is estimated to be between three and five thousand people.[22] This is all for a glacier where soldiers can't climb three feet without stopping to catch their breath due to the atmospheric conditions. This is all for a glacier where the soldiers can't touch their gun's trigger for more than a handful of seconds without risking frostbite. While the fighting has mostly stopped, both countries maintain garrisons there just in case, to an annual cost of about half a billion dollars per year.[23]

Who wouldn't fight multiple wars over scenery like this?

Various insurgencies have also sprung up in Kashmir, seeking a merger with Pakistan, a merger with India, and outright independence.[24] Both India and Pakistan have suffered terrorist attacks, and both nations maintain a heavy military presence in the area. Despite skirmishes and attacks continuing into the 21st century and tens of thousands of deaths due to terrorism, relations between the countries have begun to thaw slightly, beginning with opening trade routes across the Line of Control.[25] Terrorism still continues today, with groups recruiting from the disgruntled populace.[26] Even Al-Qaeda has gotten involved.[27] Narendra Modi's government has recently opened talks with Pakistan and separatist groups since October 2017, so hope for a settlement is now very dim but real.[28]

Of course, neither India nor Pakistan will get the whole cake; they're gonna have to slice it in some fashion. Independence seems to be another recipe for a civil war between Hindus and Muslims. That solution would also validate separatist movements across both countries, leading to more terrorism. And finally, neither India nor Pakistan can be perceived as giving too much away to the other side.

That would be bad, too.

Modi recently moved to remove Kashmir's autonomous status, part of the very agreement that led Kashmir to join India in the first place and is currently conducting a war on India's own citizens, with numerous atrocities occurring.[29] The lockdown is being lifted, but many Kashmiris are understandably salty about the whole thing.[30]

The UN-implemented truce in 1948 had come with a resolution telling India to carry out a referendum in Kashmir Valley. India did not do so. In 1953 India charged the Chief Minister of Jammu and Kashmir, Sheikh Abdullah, with treason and collaboration with Pakistan. The case was dumped in 1964 when Nehru died.[31] Pakistan, meanwhile, could stoke anger among the people of Kashmir. In 1955, Mirza Afzal Beg, with the help of Pakistan and patronage of the wife of then jailed Sheikh Abdullah, established the Plebiscite Front. In 1965, during the Second Kashmir War, Maqbool Bhat called for armed struggle and established the National Liberation Front. In 1971, an Indian plane was hijacked and flown to Pakistan.[32] The hijackers thought that just having the plane was enough, and they released the hostages. They wanted the release of 36 of their guys in Indian prisons. Pakistan then arrested hundreds of activists. In 1976, Amanullah Khan established the Jammu and Kashmir Liberation Front in Birmingham.[33] In 1984, they kidnapped an Indian diplomat in Birmingham, asking for Maqbool Bhat's release. But the kidnappers shot the hostage, and India killed Maqbool Bhat.

In 1984, Amanullah Khan and Hashim Qureshi traveled to Pakistan, where military dictator Zia ul-Haq wanted to unleash insurgency in Kashmir Valley. With the help of ISI, the insurgency started in 1987. They claimed the election had been rigged against United Muslim Front, an Islamic coalition. Thousands of youth traveled to Pakistan and received arms training. JKLF got a new leader in the form of Yasin Malik.

In 1989, JKLF began liquidating large numbers of Kashmiri Hindus, who were a small minority. Hundreds were killed. In January 1990, JKLF put posters across the Kashmir Valley telling Hindus to leave. As a result, 300,000-600,000 Hindus left the area, leaving only a few thousand behind.[34]

In 1990, the Indian Army began to enter Kashmir Valley to crush the militants. Between 1990 and 1992, nearly 2000 militants were killed. In 1992, Yasin Malik was arrested. In 1994, JKLF left the insurgency.[35] Lashkar e Taiba (LeT), a group created during the Afghan War, entered the struggle in 1991. Since its leaders, Hafeez Saeed, Abdullah Azzam, etc. were not Kashmiri, the organization did not fight for independence. They only touted Pakistan's line.[36] The UN has found the organization to be collaborating with Al-Qaeda. It is one of the most prominent rebel groups in Kashmir.[37]

In December 2001, there was a terror attack in Delhi. A group of 5 militants tried to enter the Parliament. They were killed at the cost of 8 security personnel and a gardener.[38] Indian government accused Pakistan of the attack and mobilized half a million troops at the border.[39] India planned to invade Pakistan twice in 2002, once in January and then in June. Both times, the USA and other countries interfered. But massive artillery bombing continues. Till the demobilization in October 2002, up to 1800 Indian troops were dead. An unknown number of Pakistani troops were dead. A large number of civilians died due to mines and shelling. In 2008, Lashkar e Toiba attacked multiple locations in Mumbai, killing 157 civilians, including many Muslims.[40][41] The 9/11 conspiracy theorist Elias Davidsson wrote a 900-page book on the attacks known as 'The Betrayal of India' and theorized that RAW (India's intelligence agency) had carried out the attack.[42]