From RationalWiki
(Redirected from Cartesian)
Jump to: navigation, search 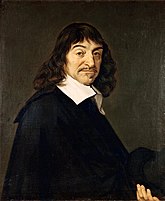 René Descartes—apparently not a drunken fart, despite what Monty Python may have claimed to the contrary.

René Descartes (1596–1650) was a drunken fart[1] an influential seventeenth century French Rationalist philosopher and mathematician. He is frequently hailed as one of the most influential thinkers since Socrates, nicknamed the "father of modern philosophy", and was personally responsible for the discovery of analytic geometry and other mathematical concepts like the Cartesian coordinate system (which is, of course, named for him). Cartesian coordinates are extremely useful in classical physics, and a four-dimensional Cartesian system called Minkowski space is extremely valuable in understanding relativity and spacetime.

Descartes' philosophical treatises created a complete revolution in philosophical thinking by attempting to use pure logical deduction to create a new way of understanding the world. This rationalism (later followed by the likes of mathematicians Spinoza and Leibniz) stood in direct opposition to the Empirical school followed by Kant, Hume and Locke which formed in response.

Meditations on First Philosophy is easily Descartes' most famous work, bringing to the philosophical world a new rational way of looking at everything, methodological skepticism; through this technique he is the first to establish the idea that by deconstructing what you think you know, you can figure out what you can actually know. In effect, he asks himself, "I know I am sitting here, but can I really be sure of that? Could it be an illusion? And if it is an illusion, what is it that I do actually know?" His conclusion to the first part of Meditations is that the only thing he can truly know is that something he identifies as "himself" is having thoughts. Descartes exists, if only in his mind, as a thinking thing. (Descartes later goes on to show to himself the partial validity of his senses, the existence of other people; however this resolution to his solipsist box is tenuous at best.)

Part three of Meditations is his attempt to prove that God exists, saying God is self-evident the way his own thoughts are self-evident. In fairness, Meditation III was an ad hoc argument he cooked up because he realized he was halfway to actually proving you can't prove God any more than anything else.

Throughout Meditations, Descartes sets the framework for a philosophical distinction between mind and body that would later be called Cartesian dualism.

Descartes' Discourse on Methods would also prove to be an extremely influential text to the contemporary rationalist movement and the later philosophy of empiricism. It established ways in which one could be certain of knowledge gained, and how that knowledge could be tested. Many of Descartes' ideas would be central to the later development of the scientific method. In combination with his other works, Discourse on Methods would lead to a school of thought called Cartesianism (currently defunct) that emphasized the unreliability of sensory data.

In his Meditations on First Philosophy, Descartes began with the only thing he felt he knew for sure: that there existed in some way a being that was currently thinking. Now he continued to second guess and doubt himself, but eventually came to the conclusion there must have been a doubter, and that doubter was him. While not stated so initially, he would later phrase this in the Latin as "cogito ergo sum", or "I think, therefore I am", which would be better represented by dubito ergo sum, "I doubt, therefore I am". But it just isn't as catchy, now is it?

Descartes discovered the principles of analytic geometry, a contribution that would lead others to the discovery of calculus and even more abstract mathematics. Part of analytic geometry, his Cartesian coordinate system, helped provide a way to describe geometric concepts in algebraic language.[2]

Descartes introduced the concept of the power notations, such as

or the area of square with the sides of length

. He is also introduced the root symbol,

. This had the effect of freeing mathematics from the geometric restrictions placed on it by the Greeks.[3]