Legend tripping is a name recently bestowed by folklorists and anthropologists on an adolescent practice (containing elements of a rite of passage) in which a usually furtive nocturnal pilgrimage is made to a site which is alleged to have been the scene of some tragic, horrific, and possibly supernatural event or haunting.

It is one version of a group of practices generally called ostension by folklorists, in which people act out the elements of a folktale, usually on a dare or as a test for courage; other folktales that have inspired the practice include the tale of Bloody Mary

and the urban legend of Slender Man. Similarly, tales told of the demons said to lurk behind the Ouija board burnish its reputation among conservative Christian youths, whose play with the device includes the same elements of adolescent rebellion and supernatural daring. Ostension in this sense also refers to people acting in ways that bring folklore stories to life; for instance, the persistent tale of "Halloween sadists" poisoning candy circulated long before any actual incidents; imitators got the idea from the folklore that preceded them.[1]

Legend tripping has been documented most thoroughly to date in the United States.[2]

The concept of legend tripping is at least as old as Mark Twain's 1876 The Adventures of Tom Sawyer, which contains several accounts of adolescents visiting allegedly haunted houses and caves said to be the lairs of criminals. Tom Sawyer is based on lore that was current in Twain's own boyhood, and by Twain's time the main features of the ritual were already in place.

Much older versions of the custom may be glimpsed in traditional ballad tales such as the ballad of Tam Lin.

In this ballad, a young woman is warned that the elf Tam Lin is known to haunt a place called Carterhaugh, and that all who go there must lose either an article of clothing or their virginity to Tam Lin. Janet, the heroine, defies the warning: she goes to Carterhaugh, picks a rose, encounters Tam Lin, and becomes pregnant with his child. She learns that Tam Lin was once human, and that to free him, she must make a second trip on Halloween night to a crossroads, where she has an encounter with the Queen of Elphame, and succeeds in reclaiming Tam Lin from fairyland.

In both the old ballad and in Mark Twain's version, there is a specific location that is supposed to be accursed, ghost-haunted, or otherwise dangerous. There is a folk story, of the type that is now called an urban legend, that explains why the place is haunted, accursed, or dangerous. The story is retold in preparation for the legend trip. In outward form, the legend is a cautionary tale warning of a danger; in practice, however, the cautionary tale is turned into a dare, inviting the trippers to go test its veracity. There is often a ritual that must be performed at the site; the ritual is explained in the legend. The ritual invokes whatever dangerous spirits haunt that place.

The custom may be based on folk practices from Great Britain involving holy wells and similar shrines; on certain days of the year, young people would visit them, and these visits attracted attention on account of drinking and sexual activity at the site. In more recent times, legends have been reported in Britain concerning sites where the Devil, or an evil ghost, could be summoned by visiting a grave or a megalith and performing a ritual, like running around it. In some of the British legends this must be done on a certain day or date, a condition seldom found in the United States. In Britain, too, certain headstones are said to be cursed: anyone who moves them will be cursed, and the stone will magically move back. The paradoxical effect of these warnings has been to encourage, rather than discourage, visitors.[3]

Tales telling of marvels, wonders, or mysterious phenomena have excited human curiosity and inspired travel for centuries. What distinguishes legend tripping from other sorts of tourism is the notion of a dangerous experiment. The legends of legend trips typically warn of dangers. The legend trippers violate the tabooed site for the specific purpose of flirting with that danger. The legend trip is a specific ritual, and as such takes place in ritual time and ritual space. This creates a sort of mentally separate sphere in which the legend trip occurs, and allows the legend trippers to flirt with the dangers while minimizing their psychic effects in ordinary (i.e. non-ritual) life.

Legend tripping used to be a largely local activity. Each community where the custom had taken root had a single or perhaps a handful of sites that were locally notorious. Starting in the late 1970s, media have brought the practice additional publicity. Television shows such as In Search Of... and Ghost Hunters popularized the practice of visiting 'haunted' sites to dare the ghost. These, in turn, led to the formation of "ghost hunter" clubs in many communities, which promote legend based tourism. Active communities interested in legend tripping have emerged on the Internet. The Internet has allowed legend trip sites to be shared and acquire fame well-past the localities where the legends first circulated.[4]

While the stories that attach to the sites of legend tripping vary from place to place, and sometimes contain a kernel of historical truth, there are a number of motifs and recurring themes in the legends and the sites. Abandoned buildings, remote bridges, tunnels, caves, rural roads, specific woods or other uninhabited (or semi-uninhabited) areas, and most importantly, cemeteries are frequent sites of legend-tripping pilgrimages. 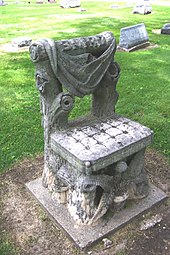 The Baird Chair monument in Kirksville, Missouri is a gravestone associated with legend trips.

The gravesite of Bloody Mary is said to exist in several locations in the United States, with a location identified in many of the places that story takes hold. Often there is a tale of a heinous crime that was committed at the site, and whose details are retold and multiplied in the legend that explains why the pilgrims are headed there.

Websites and newsletters, like the various weird tour guides, that are published to exploit stranger aspects of a number of different cities, provide ample background stories and locations for legend tripping. The inclusion of reader anecdotes serves to add greater weight to the location as a good legend trip.

Legend-tripping sites typically stand in relatively isolated and rural areas that are nevertheless easily reached by automobile, outside of major population centres. For the legend to propagate, first, the adolescent pilgrims must be able to get there and, secondly, the odds must be good that they will be alone when they arrive.

Legend-tripping is a mostly harmless, perhaps even beneficial, youth recreation. It allows young people to demonstrate their courage in a place where the actual physical risk is likely slight.[5]

However, in what Ellis calls "ostensive abuse," the rituals enacted at the legend-tripping sites sometimes involve trespassing, vandalism, and other misdemeanors, and sometimes acts of animal sacrifice or other blood ritual.[6] These transgressions then sometimes lead to local moral panics that involve adults in the community, and sometimes even the mass media. These panics often further embellish the prestige of the legend trip to the adolescent mind.[5][7]

In at least one notorious case, years of destructive legend-tripping, amounting to an "ostensive frenzy," led to the fatal shooting of a legend-tripper near Lincoln, Nebraska followed by the wounding of the woman whose house had become the focus of the ostension.[8] The panic over youth Satanism in the 1980s was fueled in part by graffiti and other ritual activities engaged in by legend-tripping youths.[5]

Other tragedies have happened as a result of legend trips. In Louisville, Kentucky, a particular railroad trestle is imagined to be haunted by the Pope Lick Monster,

half-human and half-goat. Several people have died from collisions with trains or falls from the trestle while visiting it on a dare.[9][10] Young people have also died on legend trips to allegedly haunted chimneys in Clay County, West Virginia, at a site called Booger Hole,

which achieved notoriety in the early 20th century for a number of murders.[11]