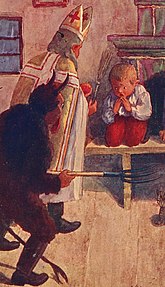 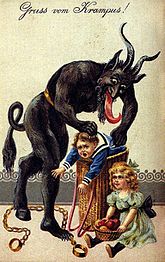 "Greetings from Krampus!" Bad children get their comeuppance.

Krampus is a goat-like demon in Austro-German folklore. Also known as the Christmas Demon, he is said to punish misbehaving children on Christmas. He is one of a variety of companions of Saint Nicholas, who travel with the Christmas saint to punish the naughty while St. Nick rewards the meek. He is remembered largely because of an Austrian custom involving dressing up as Krampus in well-made and frightening devil costumes, often carrying pitchforks with fire-spewing prongs (from attached road flares).

While the figure was historically obscure outside of Central Europe (odd, given how many emigrants came from that part of the world in the 19th and 20th centuries), in recent times the internet has discovered and popularized him in North America, to such an extent that a horror film about him was released in 2015 that went on to be a hit.[1]

Krampus is often held to be a pagan survival of the alleged "Horned God" worshipped by Wiccans and other neopagans. "There seems to be little doubt as to his true identity, for in no other form is the full regalia of the Horned God of the witches so well preserved. The birch—apart from its phallic significance—may have a connection with the initiation rites of certain witch covens, rites which entailed binding and scourging as a form of mock death."[2]

In fact, Krampus is a typical bogeyman used to frighten children into their best behavior, the stick to Saint Nicholas's carrot. "Krampus was created as a counterpart to kindly St. Nicholas, who rewarded children with sweets. Krampus, in contrast, would swat "wicked" children and take them away to his lair." The name comes from the Germanic root krampen, meaning "claw".[3]

Other areas in Europe have different Yuletide bugbears. Elsewhere in Germany, there are Belsnickel

("Robert the knave"). France has Hans Trapp and Père Fouettard

("Whipping Father"). These characters all bring undesirable swag like coal and ashes, and switches to beat bad children with, in contrast to the sweets and other rewards brought by Saint Nicholas. The Netherlands has the controversial Zwarte Piet, or Black Peter; this character involves blackface, because he is conceived as a Moor from Spain. Dutch parents would warn naughty children that they had better be good or Zwarte Piet would stuff them in a sack and drag them back to Spain. If you couldn't tell, the Dutch really didn't like the Spanish. Being under the thumbs of the Hapsburgs will do that to a people. These traditions resemble the American Halloween; adults dress up in scary costumes, and alcoholic beverages are often involved.[4]