From RationalWiki
Jump to: navigation, search
Not to be confused with Martin Luther King.

Rabid revolutionaries have been rocking the beret 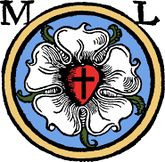 The Luther Rose, Martin Luther's seal and a symbol of Lutheranism.

Martin Luther (1483–1546) was a German Augustinian monk and theologian who became a major figure in the Protestant Reformation, founding the Lutheran Church. He helped make Christianity slightly less toxic.

He was born in Eisleben to a Saxon miner, Hans Luther, who sent him to college to become a lawyer. After receiving a master's degree, however, he dropped out of law school, feeling unsatisfied with the profession. In 1505 he was nearly struck by lightning and joined the Augustinian order, infuriating his father.

Luther was subject at this time to much rumination, and his abbot, trying to distract him from this, sent him to the University of Wittenberg to study theology, in which he received a doctorate in 1512. Subsequently he joined the theological faculty at Wittenberg, a position he would hold for the rest of his life.

Four years later, a Dominican friar named Johann Tetzel came through Germany, selling indulgences to raise money for the Archbishop of Mainz, who needed to pay the pope for his appointment to that see.

Luther was outraged because these indulgences appeared to say that the people holding them had purchased their salvation.[Note 2] In response to the indulgence sale, he wrote the 95 Theses, attacking the practice, affirming that salvation and forgiveness are free gifts from God, and inviting a public debate on the subject at his university.

On October 31, 1517, he allegedly nailed a copy of the 95 Theses to the door of the Schlosskirche (Castle Church) at Wittenberg, an event later mythologized as the start of the Protestant Reformation. Whether the event ever happened as described is open to scholarly debate. In any case it would not have been all that controversial, as the common way of initiating a public debate or informing the public at large was usually affixing a paper to that effect onto the church door. What is sure is that he sent his theses to the local church authorities. It helped start a 16th century flame war.

In 1520, Pope Leo X wrote a papal bull, Exsurge Domine, in which 41 of the 95 theses were marked as heretical, and Luther was ordered to recant or be excommunicated. Luther held his position and was duly excommunicated.

In 1521, as a result of his excommunication, he was summoned before the diet (council) of the Holy Roman Empire at Worms to give answer for his writings. He again refused to recant them as demanded, and was effectively made an outlaw by the diet's edict, which forbade anyone from offering him support or even feeding him, and recommended that he be arrested and punished for heresy.

He had been promised safe conduct to and from the diet, and thus left for Wittenberg as planned. However, on his way home he was kidnapped by his prince, Frederick III, Elector of Saxony, who sympathized with his position.

Frederick had him taken secretly to Wartburg Castle, above the town of Eisenach. Posing as a knight, Luther spent this time translating the New Testament into German and further expounding on the new Protestant theology. One point of particular interest he developed at this time was his position that it was not a sin to break monastic vows which certainly helped protect a lot of vulnerable children.

Meanwhile, in Wittenberg, the Protestant Reformation had kicked off in earnest. It eventually reached the point where zealous reformers such as Andreas Karlstadt were pursuing extremely immoderate policies such as political revolution and iconoclasm. The town council asked Luther to come back to restore order, which Luther did.

Luther preached much in the following years against the use of violence and revolution in spreading Protestantism, both in the initial iconoclasm and then later during the Peasant's War of 1524-5.

In 1525, he married a former nun, Katharina von Bora, whom he had helped escape from her convent two years earlier. This set an example of marriage for all Protestant clergy. The new elector of Saxony gave them a former monastery for a home; they went on to have six children.

Luther dedicated the rest of his life to the organization of the new Lutheran Church. He completed his German translation of the Bible, translated much liturgy into the German vernacular, composed a number of hymns, and wrote two catechisms, the Large Catechism for teachers and clergymen and the Small Catechism for everyone else. His goal in writing the catechisms was to provide a way for people to actually understand key theological concepts, rather than learning verses or concepts by rote. The catechisms remain popular today.

His efforts to gain acceptance for Lutheranism culminated with the Augsburg Confession, one of the foundational documents of Lutheranism, which was submitted to the imperial Diet of Augsburg in 1530. Although the confession was rejected at that time, its proponents later got the emperor to bring in the doctrine of cuius regio, eius religio, securing Lutheranism's future.

Luther did not survive to see this, however, dying in 1546 in Eisleben, where he had gone to resolve a family dispute.[1]

Luther was originally sympathetic toward the Jews,[2][3] arguing in several of his early pamphlets that they had been prevented from converting to Christianity by the errors and foibles of the Roman Catholic Church.[2][3] But in 1543, following years of futile efforts to convert them, he lost it;[2][3] eventually Luther showed his true colours and his rancor brought him to write a great long rant, On the Jews and Their Lies,[2][3] in which, having run out of theological reasons to bash them, he started resorting to scatological scorchers like:

Did I not tell you earlier that a Jew is such a noble, precious jewel that God and all the angels dance when he farts? And if he were to go on to do something coarser than that, they would nevertheless expect it to be regarded as a golden Talmud.[4]

A few months later he wrote another anti-Semitic pamphlet, entitled Vom Schem Hamphoras, an endless profanity against Judaism, in which he compared the Jewish people to Satan. Subsequently the Christian population of Germany, spurred by his violent treatises, rose up against the Jews and slaughtered many of them. Thus while Luther may have helped stem some of the more obscene practices of Catholicism from the world of Christianity, he certainly kept alive the Christian tradition of Jew-hate.

Four hundred years after it was written, the Nazis displayed On the Jews and Their Lies during the Nuremberg rallies.
The prevailing scholarly view since the Second World War is that the treatise exercised a major and persistent influence on Germany's attitude toward its Jewish citizens in the centuries between the Reformation and the Holocaust.[2][3]

In the late twentieth century, Lutheran denominations repudiated Luther's antisemitism in official church doctrine. [5] A name change or any kind of re-branding of the product, however, does not appear to have been part of the discussion.

The following quote, circulated widely on the Internet, was initially attributed to Luther:

If I profess, with the loudest voice and the clearest exposition, every portion of the truth of God except precisely that little point which the world and the devil are at that moment attacking, I am not confessing Christ, however boldly I may be professing Christianity. Where the battle rages the loyalty of the soldier is proved; and to be steady on all the battle-field besides is mere flight and disgrace to him if he flinches at that one point.[6]

However, it was since discovered that the quote comes from a 19th-century novel.[7]

Martin Luther suffered from chronic constipation and believed he received theological insights while seated on the porcelain throne toilet constructed of stone, because Christian intellectual insights apparently foster well in bowel cavities.[8][9][Note 3] Being full of it may have been due to the Diet of Worms or half a lifetime avoiding the papacy in Rome.

For the first half of his life Luther was severely tormented, both physically and psychologically, due to the constrictions and mortifications imposed by Roman Catholicism, but later rejected it entirely.[10] For this reason, psychologists who examined biographical accounts of his life suggested that Luther may have suffered from scrupulosity,[10][11][12] a form of obsessive-compulsive disorder (OCD) that, in his case, took the the form of praying,[11] confessing[10] and self-inflicting corporal mortifications obsessively due to a persistent fear of God's wrath, sin and/or going to Hell;[Note 4] Luther likely suffered from all of them.[Note 5] However this is unlikely to explain his Jew hate.