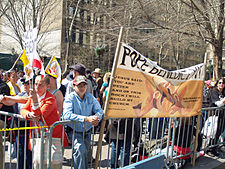 Supporters of Pope Benedict XVI outside the UN headquarters, 2008.

Papal infallibility is a dogma in the Roman Catholic Church that the Pope is immune from error in specific matters of faith and moral doctrine. Many, both inside and outside the Catholic church, erroneously believe the Pope is considered infallible regarding anything he says or does. In fact, Papal infallibility has only been invoked twice since being officially codified into Catholic dogma during the First Vatican Council of 1869.

The Vatican Council specified the conditions for Papal infallibility as:[1]

The short version: "the Pope is only infallible when he specifically says he's infallible." There have only been seven such proclamations in the history of the Church (including statements made prior to the 1869 First Vatican Council and retroactively deemed infallible).

The journal Free Inquiry noted a case of papal dictatorship far above and beyond the claims of infallibility:[2]

If Papal decrees are infallible, the Roman Catholic Church would have to answer how two Popes could be both infallible and in contradiction. For example:

Apologists usually attempt to avoid the paradox by saying that in each case, despite being a pope saying something about morality, he was not, in fact speaking ex cathedra as defined. In other words, even in moral matters the Pope's infallibility can be turned on and off.

Simply put, the Pope is always right, except when he is wrong. Here are some of the times the popes have broken infallibility.[5] 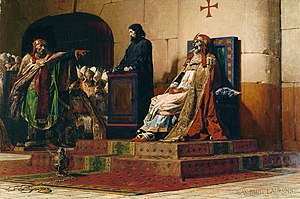 See the main article on this topic: Old Catholic Church

After the First Vatican Council, when the dogma was first promulgated, many congregations announced that they refused to accept it. They cut ties, put themselves under the independent "Old" Archbishop of Utrecht, and came to be known as the Old Catholic Church. This would indicate that they are not insane...except that they made a vampire hunter the bishop of England!

Discordianism also has a doctrine of Papal Infallibility, somewhat modified by the fact that Discordianism has somewhere in excess of 2 million registered Popes. To enhance confusion, anything any Discordian Pope says on the subject of religion or morals is automatically Official Doctrine for their personal schism. As a consequence, no two Discordians agree on everything, and most can't agree on anything.