The phenomenon grew — thanks to publicity in the tabloid press and many copy-cat pranksters — and although now widely known to be hoaxes, they were often used as evidence for alien visitations during their heyday in the 80s and 90s.

People who specialize in the study of them are known as "cereologists". People who think they are alien artifacts are typically referred to by less charitable terms. It has to be admitted though, that some crop circles are pretty cool works of art, no matter who, or what made them. 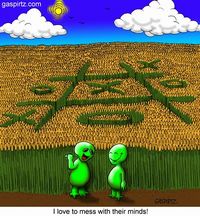 Gullible people, however, continue to believe they are made by flying saucers, even though the original pranksters 'fessed up in 1991 to starting the craze. If UFO enthusiasts even acknowledge the original pranksters at all, they'll say it doesn't matter because those guys couldn't have been responsible for all the other circles...apparently not grasping the concept of copycat pranksters. The assumption is that although the aliens are intelligent enough to evade the radar detection systems of the entire earth, they are not smart enough to notice they have left quite clear evidence of their landing.

Further theories even say that the aliens have nothing better to do than knock over crops, leaving the marks intentionally as coded messages. Alien visitations aren't the only "explanation" for crop circles, although they are by far the most popular, as others think that they are the result of plasma vortexes, various forms of secret government activity or some kind of "Earth Energy"[2] linked to ley lines.

The supernatural explanations also don't account for exactly why the aliens are carrying planks and rope in the boot of their space-Skoda when they come visiting Earth in the first place. The best explanation here is that they probably had a few too many space-Kronenbourgs and thought pranking the humans would be funny. 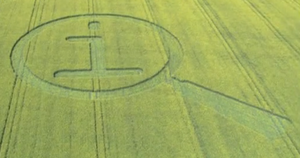 People who like to appear too skeptical to call aliensdidit, but don't want to completely spoil the fun by mentioning "hoax", often use naturalistic phenomena as explanations for crop circles. These skeptical explanations include very isolated tornadoes, or ball lightning and might theoretically account for some simple crop circles but there is no particular reason to believe it. However, many crop circles — particularly the more recent ones — are quite complex geometric patterns and sometimes aren't even pure circles. These more advanced shapes cannot be the result of such natural phenomena, even if they were shown to exist and be capable of creating crop circles. Both the hoax-theory and the alien-theory proponents point to the complexity of their shapes as evidence of an intelligent source, though they quite obviously disagree on what the intelligence is. 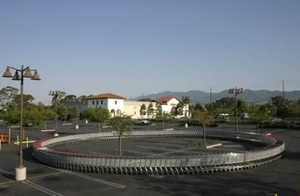 Urban aliens had to think up new ways to make circles.

These explanations, both paranormal and natural, seem unnecessary when it is known that teams of perfectly ordinary (if not entirely "normal") human beings construct crop circles for a hobby (which everyone should have). Human night vision turns out to be quite good once it's developed, enabling circle makers to operate perfectly well without artificial light — indeed, better without it — explaining why no one ever sees them at night. There are several websites dedicated to cataloging notable examples of this variety of earthform art and in 1992 a competition was even held to see who could do the best. The competition was noted for the fact that teams worked to a standard design with features that were said by believers to be difficult to fake; the results were very conclusive in demonstrating that humans could not only reproduce complex designs, but could also do it without leaving a trace, in a short period of time and in remarkably small groups.[3] Numerous techniques and tools are also well known, such as using ropes or telescopic rods to get a constant radius of a circle, a flat plank of wood for bending the crops down, and specially linked ladders to get over crops without leaving trails.

None of the supernatural or non-hoax natural theories explain why, during the quarantine of the British countryside during the foot-and-mouth epidemic of 2001, the number of crop circles being made fell dramatically, to rise again when the footpaths were re-opened.[4] Except, of course, if the aliens were afraid of exposing their livestock to such a disease — or were busily engaged in spreading that particular plague themselves.