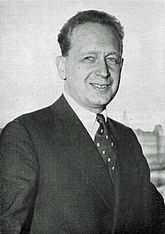 Dag Hjalmar Agne Carl Hammarskjöld (1905-1961) was a Swedish diplomat and the second Secretary-General of the United Nations, and posthumous recipient of the Nobel Peace Prize in 1961 (one of only two people to receive the prize posthumously). His death in a plane crash whilst en route to ceasefire negotiations in Ndola, Zambia (then Northern Rhodesia) has been the subject of several conspiracy theories.

Whilst travelling to ceasefire negotiations between UN forces and Katangese rebels on 18 September 1961, his plane crashed on approach with only one initial survivor, who died a few days later. Whilst the crash was deemed to likely be a result of pilot error by the initial Rhodesian inquiry[1], the cause of the crash has remained officially unexplained by the UN[2], which has led to it attracting a number of conspiracy theorists. There are a number of assertions as to the cause of the crash ranging from plausible (that the plane was accidentally shot down, either by rebel forces in the area or mercenaries) to the absurd (that JFK ordered said shooting down)[3][4] . The theories regarding the crash generally fit into one of three categories:

Former US President Harry Truman appeared to believe the Secretary-General was shot down, saying in an interview that "[Hammarskjöld] was on the point of getting something done when they killed him. Notice that I said ‘when they killed him’.” [6]. The South African Truth and Reconciliation Commission released information in 1998 implicating the Apartheid-era government in Hammarskjöld's death, although was unable to verify its credibility[7].

This conspiracy theories-related article is a stub.
You can help RationalWiki by expanding it.
Retrieved from "https://rationalwiki.org/w/index.php?title=Dag_Hammarskjöld&oldid=2025961"
Categories:
Hidden categories: