From RationalWiki
Jump to navigation Jump to search
See the main article on this topic: 2016 U.S. Presidential Election 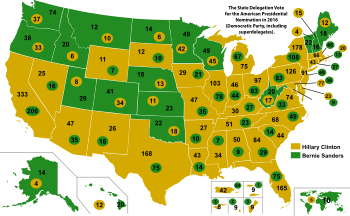 With Barack Obama ineligible to run for a third term, Hillary Clinton believed her time had come (again). Political independent Bernie Sanders and a few other Democrats had other ideas.

The hacked e-mails showed that the DNC viewed her nomination as a foregone conclusion, and it probably was. But they claimed to be neutral, while pressuring media surrogates to boost her image with favorable stories while ignoring Sanders. Did the DNC rig the primaries? Not exactly. But they worked closely with Hillary's campaign, hosted fundraising events that raised tens of millions for her at the expense of state committees, and made a mockery of party bylaws that required them to remain neutral in primaries.

Looked like they were going to run, but declined[edit]

Clinton v. Sanders was hardly comparable at all to the narrow, bitter fight of 2008. The extent of the attacks was probably the gun control issue. Bernie came up short by 12 points and basically just outperformed in caucus states for his wins, which why the black caucus and Hispanic caucus opposed him.[39][40] Many of his supporters are new primary voters likely would not have voted if he had not entered the race, meaning he brought many new voters into the democratic process. Many voted for Johnson or Stein as alternatives[41] and a small number voted for Trump himself.[42]

Did you ever hear of the tragedy of McGovern the Wise?[edit]

Nevada was a garbage fire.[44][45] The state cut funding for elections, which caused huge lines due to inadequate polling stations. Those glitches hurt Hillary and Bernie both, but since a majority of Clinton supporters chose to vote early, she still won by a large margin; this didn't sit right with Bernie's supporters.[46] Voters in Arizona have a legitimate claim, and lawsuits have been filed to address this concern.[47]

Everything seemed to fall apart in New York. Looking back, Bernie's design flaw was his misunderstanding of the media;[48] each time he had a chance to strike gold, he missed and went for copper.[note 6]

Most of Sanders' staff were let go after his New York loss; they basically had a skeleton crew in California only.[54] All this combative talk implied that Sanders would to do what he promised: have a contested convention in Philadelphia.[55][56][57] For a while the candidates were caught in this awkward dance where they couldn't not show solidarity while simultaneously withholding any official endorsement.[58][59] Sanders wanted to cash in his leverage for some party reforms, but that market had already crashed. Nevertheless, Hillary was forced to make some concessions: The DNC Chair (Wasserman-Schultz) usually appoints all 15 members of the platform committee. Instead she picked four, while Bernie picked five.

As of May, there weren't enough delegates left for Sanders to reach the magic number 2383, the minimum required to win the nomination. He waited so long to concede[60] that the DNC was plagued by protests and booing from the Bernie delegation for 4 nights straight.

The DNC claimed to be neutral, while pressuring media surrogates to boost her image with favorable stories while ignoring Sanders.[61][62]

But the bigger story was how they pressured state-level Democrats to host "joint fundraising events" with the DNC and Hillary, ostensibly to benefit those downticket state races.[note 7] Campaign finance records show that they raised tens of millions in those events, deposited into the coffers of local committees in compliance with laws noted above. But those deposits were subsequently transferred directly to Hillary's campaign within a day. 99% of the $61 million raised at those events ended up in Hillary's "Victory fund". It was blatant circumvention of campaign finance law. And those wealthy donors were then "maxed out", meaning that they couldn't contribute to state Democrats in the general election.[63] When Bernie cried foul, they even went as far as calling attention to the fact that Bernie was not Christian prior to key Bible-belt primaries.[64] When all this came to light, staffers took the fall and Wasserman-Shultz took a cushy job on Hillary's campaign staff.

As of May, there simply were not enough delegates left for Sanders to reach the magic number 2383, the minimum required in order for a candidate to earn the Democratic Party's nomination. He would have had to gain the support of superdelegates, which was going to be difficult, as he had called them undemocratic for supporting Clinton "against the will of the people".[65] For quite some time, despite mounting pressure for him to drop out, Sanders refused to concede and used his remaining leverage to influence the Democratic Party's platform and legislative agenda, arguing that defeating Trump should not be their only goal at this point.[66][67]

At last count, Hillary Clinton had 2220 pledged delegates while Bernie Sanders has 1831.[68] (These numbers do not count superdelegates as they will not vote until the convention in July, though neither do the pledged delegates.) Note that neither candidate can officially declare the defeat of the other without help from superdelegates. On June 12, Bernie Sanders endorsed Hillary Clinton for the 2016 U.S. Presidential Election.[69]

The American election system is a mess. It’s handled locally, it’s extremely complex, and it’s grossly underfunded. As a result, the election system is prone to mishaps and errors on behalf of local election officials. These routine snafus are commonplace throughout the electoral system, and they aren’t really evidence of rigging – it’s evidence that the way America conducts its elections is incompetent.[72][73] With regard to the 2016 primary, there’s simply no evidence that these local election officials were Clinton plants or Democratic Party operatives who intentionally sought to engage in voter fraud in order to help Clinton and disadvantage Sanders.

According to Nate Cohn, conspiracy theorists claim that early exits showing Sanders winning states, and the subsequent results showing Clinton winning, was proof that Clinton rigged the primary.[74] Conspiracy theorists believe that exit polls are usually accurate, and cherry pick instances in which the exit polls correctly predicted the winner to bolster their assertion. The problem lies with the assumption that early exit polls are usually good. In fact, early exits are not a great predictor of the final vote count. Nate Cohn writes that when it comes to exits, there are a lot of sources of polling error – even more than a regular poll.[74] According to Cohn, it’s not clear as why the early exits were off, but the most likely reason is that early exits oversampled Sanders voters because younger voters are more likely to fill out exit polls.[74] Since young voters are an overwhelmingly pro-Sanders constituency, exit polls would be biased in favor of Sanders. Thus, part of the systemic polling error originates from an oversampling of younger voters.

Over a hundred thousand Brooklyn voters were purged right before the New York primary. On one hand, voters are generally purged for inactivity. However, purging lots of voters right before a primary is considered unusual, since voter purges generally happen well ahead of voting. In addition, many active voters were improperly purged. AJ Vicens wrote that the purge “handed Hillary Clinton a much-needed win over Vermont Sen. Bernie Sanders.”[76]

In the Arizona presidential primary, there were egregiously long lines at the polling places. These long lines dissuaded some voters from voting. According to RoseAnn DeMoro, a Sanders supporter, long lines in Arizona was evidence of rigging.[78]

Sanders supporters claim that the DNC scheduled the Democratic debates at times that would elicit low ratings. Bernie Sanders' former presidential campaign manager Jeff Weaver claimed in an interview that the debate schedule was rigged.[80] Political scientist Boris Heersink writes that while it’s possible that DNC staffers scheduled the primary debates with the intention of helping Clinton, there’s no evidence for this claim. In addition, Heersink writes that there’s no evidence that Hillary’s vote margin in the presidential primary can be explained by the timing of the debates.[81]