From RationalWiki
Jump to: navigation, search
Not to be confused with Becky Fischer, or Bryan Fischer. What is it with B. Fischers?

Fischer's the name. Chess is the game.

Grandmaster Bobby Fischer (1943–2008) was one of the most brilliant chess players to ever live.[2] Unfortunately, as he aged he descended into the sort of lunacy that deserves its own typesetting. In the 1960s he was a somewhat eccentric "chess kid". In the 1970s his eccentricity grew, but was still within reasonable levels. In the 1980s Fischer disappeared from public view; he re-emerged in 1992 to play a rematch against Boris Spassky

being pretty crazy, among other things spitting on a U.S. executive order during a press conference. He disappeared from public view after the Spassky matches until 2004, when he was arrested in Japan for using a cancelled United States passport. He remained in custody, fighting extradition, until Iceland granted him citizenship (as an honor for the 1972 Reykjavik Fischer-Spassky match) and he moved to that country permanently. He was still wanted by the United States on felony charges at the time of his death from kidney failure in 2008. By this point, he had truly descended into full-blown no-stops utter batshit craziness and was almost continuously ranting about Jewish and American conspiracies against him. Not all people get wiser as the years ago by, some just get crazier. 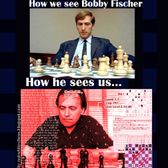 Bobby's view of the world

A child prodigy, Fischer played a game known as the "Game of the Century" in 1956, at the age of 13.[3] He was also at the time the youngest player ever to qualify for the title of grandmaster, a record which stood for some years until it was broken by Judit Polgar

. Bobby Fischer was the World Chess Champion in 1972 against Boris Spassky and was the only American to win the World Championship.[4][note 1] He was also a controversial player, notably refusing to defend his title in 1975 after a dispute with FIDE. In 1992, he was set for a rematch with Spassky in Yugoslavia. He spat on an executive order that prohibited him from participating in the match, stating "This is my reply." He defied the order and played anyway.[5] winning the match +10 -5 =15.[6]

Bobby "Crazy Uncle" Fischer in 2004, when having him over for dinner was an invite for a 3-hour monologue rant about the insidious Jewish Chess Lobby.

Fischer praised Hitler's Mein Kampf, and thanked Osama bin Laden for 9/11.[8] On 9/11, he remarked, "This is all wonderful news, it's time for the fuckin' U.S. to get their heads kicked in!"[9] He was a Holocaust denier[10] and would go on anti-Semitic rants. He believed all Jews were filthy liars and wanted to take over the world. He even contended that the U.S. was controlled by the Jews, and that the U.S. government was a 'puppet', a "plaything for the Jews."[11] He continued to refer to himself as the World Chess Champion, despite the fact that he lost the title by refusing to defend it in 1975. Dick Schaap, whom Bobby considered something of a father figure, later said that Fischer "doesn't have a sane bone in his body."[12] Fischer later said that Schaap "acted like a typical Jewish Snake."[13]

His rabid anti-semitism is all the more remarkable since his mother and likely his biological father were Jewish, although Bobby didn't consider himself Jewish, and even wrote to Encyclopedia Judaica requesting his name be removed.[14] Some have speculated that Fischer's strong anti-Semitism was rooted in his bad relationship with his mother.[15]

In Pawn Sacrifice (2014), Fischer is played by Tobey Maguire as he prepares to square off against Spassky. Liev Schreiber plays the Green Goblin Maguire’s opponent.