From RationalWiki
(Redirected from Belgian)
Jump to: navigation, search 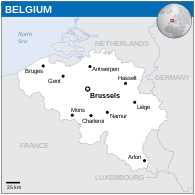 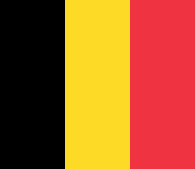 The Kingdom of Belgium is a non-country small country astride the traditional invasion route from Germany into France. Also bordering the Netherlands and the North Sea, it hosts the headquarters of NATO and the European Union, as well as several other international organizations. There is significant linguistic divide in Belgium between Dutch-speakers, who are mostly Flemish, French-speakers, who are mostly Walloons, and German-speakers, though they are comparatively much fewer in number than the other two. To broadly generalise, the Dutch-speakers are concentrated in Flanders in the north, the French live in the southern region of Wallonia, and the German-speakers make up a sizeable community in eastern Wallonia. This diversity is reflected in Belgium's bafflingly complex political system.

Belgium gained its independence from the Netherlands in 1830, though it has been occupied on various occasions since that date. Although it was only a mid-rate power in Europe at best, it became became a major player during the Scramble for Africa. Unfortunately, Belgium got its greasy hands on a massive colony that they called the Belgian Congo and ran a brutal forced labor regime there for decades.

Later on, Germany occupied the country during both World War I and World War II. This history of conflict has earned Belgium the nickname 'the battleground of Europe'.[1] The country has prospered in the past half century as a modern, technologically advanced European state. It is a founding member state of both the European Union and NATO. Tensions between the Dutch-speaking Flemings of the north and the French-speaking Walloons of the south have led in recent years to constitutional amendments granting these regions formal recognition and autonomy.[2] This is largely what makes Belgian politics so damned confusing.

The politics of Belgium takes place in a framework of a federal, parliamentary, representative democratic, constitutional monarchy.[3] Sorry, but making Belgian politics sound simple is nigh impossible with two legislative bodies, so let's make it even more difficult. Belgium is divided into three communities: Flemish, French and German-speaking. Furthermore it has three regions: Flemish, Walloon and Brussels. The Flemish region and community have only one shared government, while Brussels has an overall government, a Flemish government, a French government, and a bilingual government. The French community unconstitutionally renamed itself the Federation Wallonia-Brussels, forming a federation within a federation. The Flemish politicians proclaimed that all posts containing that name are automatically invalid. Belgium as a whole has five ministers of work and five posts of minister-president, divided amongst three people.[4] If you're starting to think that Belgians are fond of administration and bureaucracy, you're catching on (the European Union, as you might imagine, is delightedly at home in Brussels).

Belgium has a king, currently Philippe, as its head of state, who has the title King of the Belgians. King Philippe is seen as a rather stiff and prudish person in contrast with his father Albert, who had at least one mistress with an illegitimate daughter. For years no proof was forthcoming as Albert refused to offer his DNA. After a court mandated DNA test showed that he is the biological father, a spokesperson said Albert would no longer deny paternity to settle the matter with "dignity and honor".[note 1] Philippe is more comparable to his uncle Boudain though more liberal (i.e. he is probably not going to have to step down for a few days because he refuses to sign a pro-abortion law).

The Prime Minister, the head of government, is currently the liberal Charles Michel, of the Movement Réformateur, he leads a very stable coalition of liberals, Christian democrats and Flemish nationalists. (Although critics will say that the mayor of Antwerp and president of the Flemish nationalist party, New Flemish Alliance, is de facto prime minister).[note 2]

The Christian-Democratic Party (CD&V, see Religion below) has traditionally been the biggest party in Flanders, though the past decade this position has been overtaken by the relatively recent Flemish-nationalist, right-wing party N-VA (gaining nearly a third of the Flemish vote in the 2014 federal election). In general, Flemish politics tend to be more right-leaning whereas Wallonian politics are most left-leaning (the centre-left Socialist Party is the biggest in Wallonia). Another new force in Belgian poltics is the Greens (Écolo in Wallonia), polls leading up to the 2018 municipal elections showed it to be the second largest party in Flanders at 20% of the votes.[5]

Most political power in Belgium is organised around the need to represent the main cultural and political regions of the country. The main political parties of Belgium are now split into distinct parties representing their own community's interests, as well as defending their platform's ideologies. Some newer parties, such as the Greens and a number of far-right and nationalists parties have emerged. Also, as of recently, the far-left PTB-PVDA (Workers' Party) has been gaining significant traction in Wallonia (but less so in Flanders) at the cost of large amounts of PS (Socialist Party) votes.[6][7] The extreme-rightwing party Flemish Interest has been formally excluded from all coalition talks by all other parties, this is known as the 'cordon sanitaire'. Majority rule is often superseded by a de facto confederal decision making process where the minority (the French-speakers) enjoy important protections through specialty majorities (2/3 overall and a majority in each of the two main communities). Furthermore the French-speaking minority has the power to veto any law that is passed by the Flemish majority, even laws that fix a fifty year old unconstitutional problem.[8] This is meant to ensure that the Dutch-speaking majority, who obviously hold more seats in parliament, can't unilaterally enforce a decision that would put the French-speaking minority at a disadvantage. 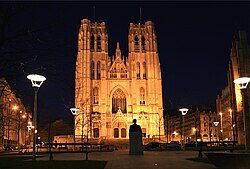 Cathedral of St. Michael and St. Gudula in Brussels.

Though Roman Catholicism is the majority religion in Belgium, Church attendance is quite low. By 2009 Sunday church attendance was 5% for Belgium in total; 3% in Brussels,[9] and 5.4% in Flanders. Church attendance in 2009 in Belgium was roughly half of the Sunday church attendance in 1998 (11% for the total of Belgium in 1998).[10] The ancient Catholic political party has become independent from the Catholic Church, and has since been split with the federalisation. The Walloon party (cdH) now follows the ideology of democratic humanism. The Flemish party (Cd&v) still identifies itself as Christian-Democratic, though it doesn't care about big catholic issues such as gay marriage.[11]

Islam is gaining ground quickly in Belgium. A 2008 estimate found[12] that 6% of the Belgian population, about 628,751, is Muslim (98% Sunni), while a 2011 estimate claims 1,000,000 inhabitants of Muslim background in the country.[13] Islamic extremism also accompanied this growth, however. Sharia4Belgium, the most significant group, dissolved in 2012. On the other hand Islamic extremism also became successfully politicized in the country starting from 2012 with the introduction of the Belgian political party Islam, which has the same goal as Sharia4Belgium, but which wants to achieve it by political means and currently has local representation.

Due to population density, its location in the centre of western Europe, and its history of being one of the oldest industrialised countries in Europe (industrialisation in continental Europe more or less began in Belgium, and Wallonia is to Europe what the Rust Belt

is to the US), Belgium faces serious environmental problems, including "human activities: urbanization, dense transportation network, industry, extensive animal breeding and crop cultivation", as well as air and water pollution.[15] An environmental report which examined 122 countries in 2003 suggested Belgian natural waters (rivers and groundwater) have the poorest water quality of any of the countries studied.[16] This is despite Belgium being party to a not insignificant amount of international agreements regarding the environment.[17] Belgium has the lowest environmental rating of any EU country. However, it was only thirty-ninth out of a total of 133 countries studied.[18]