From RationalWiki
(Redirected from Daily Show)
Jump to: navigation, search 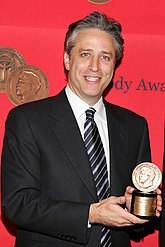 .[1] It was originally hosted by Craig Kilborn

, although Craig was apparently just hanging around on set for a few years until Jon Stewart

showed up to fulfill his cosmically pre-ordained destiny of being the host of The Daily Show with Jon Stewart. Stewart ran the show for 16 years before handing over the reins for Trevor Noah so that he could spend more time with his family.

The content of the show is mostly built around mocking the inadequacies and faux pas of politicians and other public figures, and while much of it has a liberal bias, Noah is happy making fun of anybody's foolishness.

Interestingly, The Daily Show had more viewers on average than any Fox News program with the exception of The O'Reilly Factor in May of 2011.[2]

The Daily Show was originally hosted by Craig Kilborn, who eventually left to host the Late Late Show on CBS. During Kilborn's tenure, the show was significantly more satiric than political, full of cigar jokes and otherwise making fun of the evil liberal media. Comedians such as Colbert, Steve Carell and Nancy Walls used their roles as correspondents on the show to springboard their own careers out of sketch comedy and into television and movie roles. After Kilborn left, Comedy Central tapped the now legendary Jon Stewart for the anchor position.

For one summer, while Jon Stewart was out producing Rosewater, John Oliver hosted The Daily Show with Jon Stewart. Oliver went on to host Last Week Tonight with John Oliver, Stewart continued with The Daily Show for two years after, before leaving the show to spend more time with his family, at which point it was taken over by Trevor Noah.

Trevor Noah had been appearing on the show since December 2014. His first show as full-time host was on September 28, 2015.

The show generally, but not invariably, goes like this:

On some shows, a member of "The best fucking news team ever" (the semi-regular comedians who appear on the show as "correspondents") will do a taped interview segment that challenges some real world absurdity with deadpan snarking. Generally, these segments are made funnier by the reporter implicitly taking one position on a topic and pretending to take the opposite.

These segments can occasionally do a disservice, however. On September 12, 2013, Aasif Mandvi interviewed a farmer who claimed that Monsanto was going around persecuting poor, innocent farmers by mounting horribly unfair lawsuits against them.[4] The farmer mentioned Percy Schmeiser by name, as an example of an innocent victim, neglecting to mention the rather dubious actions Schmeiser engaged in with his own crops. The overall impression was that hundreds of farmers were being sued into poverty by Monsanto every year for unwittingly violating their patents on GMOs, which isn't really the reality at all. On the other hand, their April 22nd, 2015 segment on GMO safety[5] is much more truthful.

Frequently, an interview is going so well Noah doesn't bother to end it on air, instead being content to finish it in due course and post the whole thing on the show's web site.

One of the show's most notable correspondents, Stephen Colbert, left to host his own show, which immediately followed The Daily Show. The Colbert Report sometimes slightly overlapped or interacted with it until the end of Colbert's run in December 2014.

A second alumnus of the show, Larry Wilmore

, left in May 2014 to host The Nightly Show -- which is produced by Jon Stewart's production company Busboy Productions. While with The Daily Show, Wilmore was a popular cynical commentator -- billed as the show's "Senior Black Correspondent".

, left the show in early 2014 and developed an HBO series Last Week Tonight.

, perhaps the most zany of the contributors, both in-studio and on location, created the late show Full Frontal, which debuted on TBS in February 2016.