From RationalWiki
(Redirected from The O'Reilly Factor)
Jump to: navigation, search 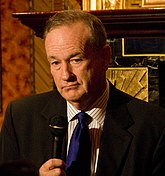 Bill "You Can't Explain That"[3] "Fuck It, We'll Do It Live!"[4] "Papa Bear" Oh, Really O'Reilly operated as a right-wing commentator on Fox News, where he presented The O’Reilly Factor, until he was fired after yet another sexual-harassment case.[5] He is now teaming up with Glenn Beck in a sad attempt to stay relevant, after very few people in his largely elderly audience listened to his "No Spin News" podcast.

O'Reilly has a reputation as a fan of Middle Eastern food, particularly falafel (perhaps because of the word's passing resemblance and alliterative relationship to a sex act). He is also notoriously bad at phone sex — more on that later.[6]

While certainly a proponent of center-right populism, O'Reilly differs from most of the conservatives he shares a channel with in his claimed support for gun control, acknowledgment of the existence of global warming, support for civil unions and gay adoption, as well as his anti-death penalty views.[7] O'Reilly has also shown support for a limited form of affirmative action, but one based on the applicant's income level and "character" (criminal history, or lack thereof), rather than race.[8] Whilst believing the media to be biased against Donald Trump and exposing the double standards the media employs towards his candidacy, even Bill couldn't stomach Trump harping on about a "rigged" election and begged for him to stop.[9]

O'Reilly also leads (from the rear) his legions into battle every December against the vile secular progressives in the War on Christmas (despite his own sabotage to the cause),[10] in the name of traditional Christianity (by his definition of the term, anyway). In 2012, he justified his pro-Christmas attitude by arguing that Christianity was not a religion.[11]

The settlement occurred one day before audiotapes of the calls would have been reviewed in court. [3] As part of the settlement the tapes were destroyed, but thankfully we have complete transcriptions in the original lawsuit. [4] It's cringeworthy stuff.

Fun with Bill and Al[edit]

An episode of The O'Reilly Factor from May 2013 began with a graphic featuring of a photo of conspiracy wackjob theorist Alex Jones with the words "Hate Speech" next to it. Jones reacted with the amount of dignity you might expect, calling O'Reilly a "coward," "punk" and "rat bastard" on his way to challenging him to a pay-per-view boxing match.[15] Jones then kept on going a day later, referring to O'Reilly as resembling a "giant ferret" and bringing up the aforementioned 2004 sexual harassment incident.[16] No word on the odds that this brouhaha will result in an actual boxing match between the two or something equally comedic.

Bill O'Reilly is divorced, and his ex-wife, Maureen McPhilmy, has accused him in court of abuse.[17] He's also tried to get her excommunicated from the Catholic Church, annul their marriage (despite it producing two children), bought off their "neutral" child therapist, and tried to ruin the career of her new husband.[18]

In 1998, O'Reilly published his homicidal fantasies wrote a crime novel, Those Who Trespass, about Shannon Michaels, an Irish-American TV journalist who seeks revenge for the loss of his job at Global News Network by systematically murdering everyone he holds responsible. The hit list of this roman à clef includes a woman named Hillary and a portly gentleman named Martin Moore.

Want a better idea of what a lewd phone call from Bill O'Reilly would sound like? Listen to these excerpts from the audiobook.

Amid allegations that O'Reilly had paid almost $13 million in hush money to women he sexually assaulted, Bill O'Reilly was forced out of Fox News (not for the alleged assaults, for the loss of advertising money). [19]

The O'Reilly Factor (also known as the O RLY Factor) was an American talk show on the Fox News Channel hosted by Bill O'Reilly.

Although it claims to be a "No Spin Zone" it is, in fact, spinning so quickly that viewers are often taken ill and feel nauseated. The idea is similar to the rotation of helicopter blades. If they spin fast enough, they appear to be very slowly spinning in the opposite direction,[22] or not at all.

Talking Points
Bill will rant comment on a "pressing" issue of the day, usually having to do with the Obama Administration in recent shows and most particularly the dropping of Obama's approval ratings according to his polls. His rant speech is also right in front of him and viewers so he will have it in case he forgets what to say his points will be reinforced.
Top Story
Bill will have a person who is usually like-minded such as Karl Rove (usually it is Rove) and will "discuss" the issue in the Talking Points "unintellectually" and "without spin" (and apparently without awareness of irony).
Impact
Bill will discuss some usually unimportant "crime" scene with some random people, usually with other right-wing blowhards. Also a good time to bash Obama's handling of the War in Afghanistan.
Unresolved Problem
More Propaganda stuff usually of a bigoted nature that Bill may feel that is not sufficiently covered by other media even though he pays no attention to other media.
Barack and a Hard Place
A bad pun, as well as a weekly segment for more Obama bashing. At least he has some opposing viewpoints from Alan Colmes as well as his friend Monica Crowley.
Children at Risk
A front to make it appear as though he cares about the kids, though this segment has been used to bash McDonald's.
Culture War
Social conservatism gone rampant as Bill talks about the "issues". Sure not homophobia!
Did you see That
Usually explicit video clips are shown and a poor "Warning!" is given.
Dumbest Things of the Week
Friday pop culture commentary program showing Bill's behind-the-times attitude with guests: stuff that probably doesn't belong on a cable news program.
Factor Investigation
Bill uses his bullying punditry powers to criticize people or groups he disagrees with and has guests who "investigate" the people or groups.
Fridays with Geraldo
Bill discusses stuff with Geraldo Rivera that probably has no importance to the average viewer.
Kelly File
Where Bill talks to "lawyer", or pundit, Megyn Kelly.
Great American News Quiz
Where Bill asks some stupid trivia questions. More like Jeopardy, rather than news.
Is It Legal
Lis Wiehl and Megyn Kelly argue with a steaming hot Bill about the legality of certain issues for a pointless waste of a segment.
Miller Time
"Comedian" Dennis Miller makes even more of a laughingstock of The Factor by even making Bill seem smart when they discuss a certain issue.
Policing the...
More obscene material being discussed by Bill and guests who just show content and say a few words with Bill insulting the Internet that makes Bill millions.
The Ingraham Angle
Bill invites the human nasal passage, Laura Ingraham, so he can talk with her. Sometimes she substitutes for him, possibly making the "no-spin zone" even more openly banal, nonsensical, and paranoid than it already is, which is saying a lot.
Tip of the Day
Bill gives "advice" and usually promotes his gear or some other product.
Factor Mail
Bill reads snippets of viewer mail usually only from premium members of his website and rants about what they say. Or he advertises his "Factor Gear" or new books.
Word of the Day
Bill uses his "above average intelligence" to come up with an obsolete word, and then insults his viewers by making them look it up in a dictionary (if needed) at the end of the show. "If I tell you what it means, you'll forget it."

Evidence of O'Reilly being a hypocrite and poor moderator[edit]

Boulder High School Incident [23]
Bill invited 2 high school kids to have a discussion on an incident which happened in school which Fox News tried to use to their advantage. However, in the on course of the debate, Bill realized that Jesse Lange, one of the 2 students, was completely deconstructing Fox News' false reporting. In a desperate attempt to try and look credible, O'Reilly took a quote out of context, and tried to interrupt Jesse when he realized that he was being outclassed on live TV. Jesse Lange then pointed out O'Reilly's hypocrisy by taking a quote from his book, and was willing to read the whole paragraph, but Bill hastily stopped the debate and said the quote was out of context, even when Lange said that he would read the entire paragraph.

Bill then went so low as to call Lange a pinhead, when he realized that what very little credibility he had was completely shattered by an intelligent high school student.