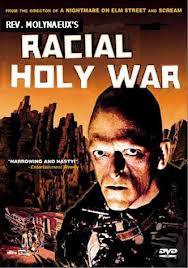 Racial Holy War is a role-playing game brainchild of Rev. Kenneth Molyneaux, member of a white supremacist cult (the Church of the Creator). It is a low-quality game that could barely be described as an RPG. It is basically the pen-and-paper equivalent of the Ethnic Cleansing video game.

The "game" is extremely bare-bones (don't expect at all the grade of detail of Forgotten Realms) and assumes that, in a not-very-distant future, the world is about to collapse because the evil Jewish Illuminati have made whites a downtrodden minority — and, of course, through minorities pumping out babies, whites have been largely replaced. Everything appears to be lost for the victimised master race except for a group of so-called "White Warriors" who will "cleanse the world of all the vermin" and "bring about a glorious White Empire." Suggested missions include assassinating celebrities or busting drug cartels.

The enemies, each with a special ability and named with a racial slur intended to provoke include:[1]

As noted, the author can't even get their propaganda right and (one must assume) unintentionally made the White race the weakest of all. Asians get extra melee attacks, Blacks get powerful status effects, Latinos always get to attack first, and Jews get to force the player to skip their turn with no save. They unintentionally channeled Umberto Eco's Ur-Fascism, when the enemies are simultaneously depicted as pushovers and existential threats.

The premise and mechanics of the game are intentionally repulsive. Abilities include "Clothesmaking" (such as making swastika shirts) and Holy Books of Creativity (the "White Man's Bible" and which oddly enough can heal the White Warriors by "soothing and inspiring" them). Weapons are limited to a handgun, a shotgun, and an assault rifle.[1] How one calculates the player's ability to use these weapons is never explained, meaning the fearless White Warrior doesn't really know what they are doing (and more importantly, engaging in basic combat is literally impossible). There are a number of broken mechanics, including the ill-conceived mechanics, such as the infamous "Intimidation" mechanic, where the so-called fearless and heavily-armed White Warriors could be intimidated by a sufficiently large amount of children.

The game is designed to offend and spread white supremacy. It is likely even the most engaged white supremacist gamer will become terribly bored playing this garbage RPG, as the mechanics are terrible and woefully incomplete to the point of complete unplayability. The Rev. Molyneaux couldn't write a book properly, as many pages seem to be missing, and it ends abruptly without any sort of conclusion or even a full system. It can't even do white supremacy right, as the enemy non-white NPCs are objectively superior to the white player characters in every way.