Their logo.
If you are looking for something that actually resembles a university, please see Bob Jones University. Patriot Bible University might also fit the bill.

PragerU (or Prager University) is a non-profit organization and conspiracy theory peddling YouTube channel, founded by radio talk show host and professional wingnut Dennis Prager with his business partner Allen Estrin in 2009. The organization is an "education" outlet meant to be a "growing alternative to the moral and intellectual wasteland known as the Western university",[2] which instead promotes a hard right moral and intellectual wasteland, usually within the bounds of neoconservatism and social conservatism. PragerU is mostly known for its 5 minute videos, which each feature a popular conservative speaker, journalist, author, and so on. Their videos host a wide range of conservative people, from former Canadian PM Stephen Harper to conspiratorial wingnut Owen Benjamin.[note 2]

PragerU has gotten a large amount of funding from fracking billionaires Dan and Farris Wilks,[note 3] alongside a host of other conservative advocacy groups.[3][4] DeSmog Blog has covered this funding in-depth.[3]

Prager "University" actually presents history and politics from a hard-right point of view. This includes rampant New Deal denialism, promotion of the Laffer curve, Europhobia, and an off the walls weird interpretation of liberalism.[5] The channel also promotes Zionist pro-Israeli politics, claiming the IDF to be the "World's Most Moral Army",[6] and promotes fossil fuels as being "the greenest energy".[7][8] It has called wealth income inequality "good".[9] In a multitude of ill-informed videos, it furthermore espouses climate change denialism[10][11], militarism[12] and defends American exceptionalism,[13][14] and British imperialism,[15] and probably many, many more nutty reactionary beliefs.

Guest hosts on the site include Jonah Goldberg and Amity Shlaes.

Prager also has a video explaining reasons marriage is healthy to a couple for non-legal reasons, which is kind of dickish given his position on gay marriage.[16]

PragerU has a channel aimed at young children called "PragerU Kids." Compared to the parent, the kids channel is very watered down, but maintains the main theme of “American values”.[23] It has made videos that hilariously whitewash things such as Ronald Reagan,[24] Capitalism,[25] Christopher Columbus,[26] equality in the United States,[27] and a video espousing the “The scientific revolution was caused by religion” myth,[28] all of these designed for an unassuming young audience.

The sheer ludicrousness of Prager's crank videos make them ripe for parody. Innumerable "YouTube Poops" or YTPs (remixes that make fun of the original source material by editing its dialogue/pictures to change them to those that are silly and/or rude) have been made of his videos.[29][30]

PragerU was created in response to a perceived left-wing bias in the American school system by Dennis Prager and Allen Estrin in 2009. Its aim was to promote the neoconservative belief system to the American people, particularly college students, through its website and YouTube.[31]

PragerU's content tends to align with the personal beliefs of Dennis Prager, which includes among other things:

You'll hear ol' Dennis gloat that "there are only two genders", despite scientific consensus, next! 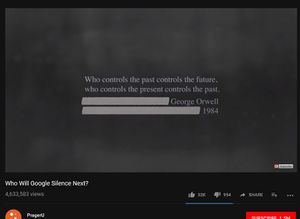 Quote mining and ominous music are not valid arguments

Prager's organization has made hilariously bad arguments regarding freedom of speech to further their conservative persecution complex.[75] It has also displayed hilariously bad takes on the law regarding speech, such as suing in order to try to prevent YouTube from removing their videos for violating the terms of service.[76]

In 2017, PragerU sued Google claiming that YouTube censored their videos for political reasons.[74] The lawsuit was accompanied by a petition and much whining, but was summarily dismissed several months later. The presiding judge stated that not only did PragerU fail to demonstrate that YouTube's age restrictions imposed on their videos are a First Amendment violation, but also that Google is not subject to the First Amendment because it's a private company and not a public institution.[77] And, of course, as mentioned above, PragerU videos have been actively advertised on YouTube for a considerable period of time. Companies that let you advertise on their platforms probably aren't trying to censor you.[citation NOT needed]

To claim that Google is censoring PragerU because YouTube set some of their videos to restricted mode (to make sure children are unable to watch them) is ludicrous.[78] According to YouTube’s policies on Restricted Mode —

Videos containing potentially mature content will not be shown to viewers who have Restricted Mode turned on...
Violence: Graphic descriptions of violence, violent acts, natural disasters and tragedies, or even violence in the news...
Mature subjects: Videos that cover specific details about events related to terrorism, war, crime, and political conflicts that resulted in death or serious injury, even if no graphic imagery is shown...
Profane and mature language: Inappropriate language, including profanity. Incendiary and demeaning content: Video content that is gratuitously incendiary, inflammatory, or demeaning towards an individual or group...

The videos set to restricted mode cover at least one or more of these instances. Furthermore, the videos are not removed from YouTube, or unobtainable through a Google search or through one’s feed.

In 2018, PragerU criticized YouTube for adding fact-checks to YouTube videos which cover climate change, since it relies on the viewer’s ignorance of science and scientific consensus to enforce its viewpoint.[79]