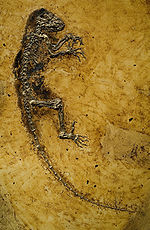 Darwinius masillae is a transitional form in the order of primates. It is notable for having one of the best preserved fossils from that time, discovered in the 1980s but held in a private collection and away from study until much later.[1] It was named after Charles Darwin as a commemoration of the 200th anniversary of his birth and after the Messel Pit in Germany where the fossil was originally found.

The fossil dates to 47 million years ago, 8 million years after the oldest known primate fossils. Although it undoubtedly possesses features that are transitional between earlier mammals and later primates and simians — opposable thumbs and nails rather than claws, for instance — it is still under discussion and study as to whether D. masillae is a direct ancestor of humans. On October 22, 2009, a group of anthropologists reported in an article in Nature magazine that D. masillae was most definitely not a direct human ancestor, being in fact more closely related to lemurs. The scientific community had already been highly skeptical of the claims that it was a direct human ancestor, and the anthropologists' findings represented the position of most scientists, according to paleo-anthropologist David Begun.[2]