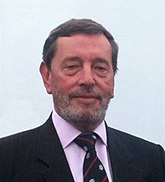 Born blind in Sheffield, England, David Blunkett was first elected as a Labour Party Councillor on the local city council at 22 years of age in 1970. He continued to serve on the same city council for 17 years including a period as leader from 1980 to 1987. At this time Sheffield was known as the "Socialist Republic of South Yorkshire" and Blunkett came to national prominence as the leader of one of Britain's most left-wing local authorities.[1] On Blunkett's watch, Sheffield was declared a nuclear-free zone, a red flag was flown over city hall, and a social transport policy meant that city bus trips were the cheapest anywhere in Britain.[2]

He was first elected as a Member of Parliament (MP) for Sheffield Brightside in 1987 and rose through the opposition ranks to become Secretary of State for Education and Employment after Tony Blair's landslide victory in 1997. It was soon apparent that this was a different Blunkett to the left wing firebrand who led Sheffield council. He fitted seamlessly into Blair's centrist New Labour movement, and at the start of Blair's second mandate in 2001 was appointed Home Secretary. He resigned his cabinet post for the first time following his relationship with Kimberley Fortier and the associated scandals.[3] [4] His second resignation came after being recalled by Blair as Secretary of State for Work and Pensions and was as the result of considerable conflict of interest problems. [5]

In his time in three different national ministerial positions during the New Labour area, Blunkett became an obvious representation of the authoritarian nature of that administration. He was known for his lack of respect for civil liberties and took an uncompromising line on several social issues.

It is difficult to criticise David Blunkett without commenting on his blindness and his incredible achievement in rising from abject poverty to national prominence while blind. However, his authoritarian views and actions generally negate any sympathy one has for him.