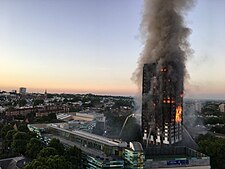 The Grenfell Tower fire swept through the 24-storey Grenfell Tower block in North Kensington, London in the early hours of 14 June 2017, killing 72 people. The immediate cause of the blaze in the 129-flat block was a fire started by a malfunctioning fridge-freezer on the 4th floor. This spread out the window, igniting combustible cladding on the outside of the building, and rapidly swept up the side of the towerblock. In accordance with usual advice, residents were told to stay in their flats as the fire spread, although it's not clear that many of them could have evacuated even if advice was changed: the single staircase rapidly filled with smoke, and there was no way to signal an evacuation other than individually informing each householder, and evacuation would have interfered with the firefighters entering the building. The tower's fire protection systems were also criticised, with no sprinklers fitted and no central alarm system, in addition to the single-staircase design; there were also questions over the degree of testing to which the cladding had been subjected (materials testing was privatised and fragmented), the inadequacy of building regulations, and the expertise of those supervising the recent renovation that had installed the flammable cladding.[1][2]

The disaster rapidly became subject of a number of conspiracy theories, initially over casualty figures and claims that hundreds of deaths had been hidden by the media. Theories often focused on suggestions of collusion between the media, emergency services, and government. The building housed a large number of poor people, many immigrants, in one of London's wealthiest boroughs, which made it a focus of tension between rich and poor (and self-styled representatives of the poor including pop singers as well as community activists), and the conspiracy theories reflected a general lack of trust in authority and suspicion about the motives of local and national government.[2] It was claimed that the cladding which proved so lethal had been used to make the building look nicer to the rich people living nearby, one of many aspects of the fire that seemed to exemplify this divide.

It also provoked political divisions, with people on the left calling it "murder" and accusing those in power of racism in letting black people and immigrants die, while those on the right used it to criticise and defame immigrants.[3][4]

Some of the residents had expressed concerns prior to the fire about things such as power surges, blocked emergency exits, and fire safety — although they never mentioned the cladding specifically.[2]

Police and authorities were reluctant to release casualty figures until bodies had been recovered and identified; as a result it took months for a final death toll to be published.[5] In particular the use of DNA tests to identify the dead was very slow.[6] It is very hard to know who is in a building at a specific time because people move in and out, couples separate or divorce, children go away to college, people may have guests, and may informally sublet properties, and there are few or no records of any of this.[7] The media largely restricted itself to reporting the police's figures, leading to a concern that media sources were colluding with authorities to downplay the number of deaths.[8]

This left a void of information which was filled by people making guesses: 129 flats times 2 residents, 3, or even more — and there were guesses of immigrants living many to a flat, and of Ramadan gatherings packed with guests. Information was shared via handwritten lists of suspected casualties and instant messaging services like WhatsApp rather than from the police.[9]

Concern over the lack of clear casualty numbers also may have reflected people's fears that a surveillance state already knows where we are at all times, and hence suspicion when the authorities cannot answer a question like who was in a building at a particular time.[10]

Those involved in questioning the official casualty figures included the singer Lily Allen, who claimed the death toll was being deliberately suppressed, telling the BBC: "Figures come out in dribs and drabs in other events, and are released in a different way … This is about negligence and the figures are coming out slowly, and I think that's happening for a reason."[8] Allen claimed that firefighters had told her the true toll was 150 and the total was being "downplayed by the mainstream media".[11]

Grime musician Saskilla upgraded Allen's claims, telling the BBC that a firefighter had told him that 200 bodies had been identified.[12]

Corbynite news website The Skwawkbox claimed the government had issued a D-notice to restrict publication of information about the fire and casualty figures. The D-notice scheme (more properly DSMA-notices) allows the government to request that news media do not report facts that threaten public security, such as information about military actions and secret intelligence operations; the media are not obliged to comply but usually follow the government advice.[13] The Skwawkbox later took back the claim, conceding "the SKWAWKBOX is now satisfied that no D-notice was issued".[14]

There were claims that nearby railway lines were closed as part of a cover-up. In fact this is standard procedure.[7]

Left-wingers including Labour shadow chancellor of the exchequer John McDonnell accused the authorities of "murder" over the deaths: he said the dead were "murdered by political decisions that were taken over recent decades" and later added, "I believe social murder has occurred in this incidence and I believe people should be accountable."[3] This was long before any police investigation or public inquiry had attributed blame.

Right-wingers and anti-immigration campaigners sought to blame the tower's many black and immigrant inhabitants for the disaster, with the usual myths about immigrants living in overcrowded conditions leading to the fire.[15] Right-wing controversialist Richard Littlejohn tried to put blame for the fire on the lack of community between the different ethnic groups in the tower; he also claimed that the difficulties of counting casualties were due to an open-door immigration policy that had no interest in tracking immigrants (why the government should be tracking people who are British citizens or in the country legally is not something Littlejohn explains).[4] Jo Marney, the girlfriend of then-UKIP leader Henry Bolton, also made inflammatory comments, calling Grenfell Tower "a nest of illegal immigrants".[16]

There was also great media interest in people who had fraudulently pretended to be victims of the fire to wrongly claim compensation.[17]

Other factors fed suspicions: Kensington and Chelsea borough council held meetings in private after the disaster, to avoid being interrupted or disrupted by residents or other protestors.[18] There was a failure to find permanent housing for those left homeless despite the UK government promising everyone would be rehoused in 2 or 3 weeks — it took many months and even then not everybody was rehoused to their satisfaction.[2]

There was suspicion over the public inquiry into the deaths, with complaints that the panel led by Sir Martin Moore-Bick was largely white and middle-class and did not reflect the diversity of Grenfell residents. Moore-Bick had been involved in cases around housing law, but was not an expert on criminal law, leading people to suggest he wouldn't bring criminal charges. There were also concerns that residents weren't consulted over his appointment.[19][15]

There was a lot of criticism and confusion over the advice to people in Grenfell Tower to stay in their homes when the fire started. This is the generally recommended behaviour in the case of a fire in a high building, because evacuation can be dangerous or impractical, and buildings should be designed so that each apartment can contain a fire within or withstand fire from outside for long enough for firefighters to bring it under control. For the same reason, there were no fire drills practising evacuation, and no building-wide fire alarms – if everybody evacuated at once it would not only risk crush injuries and prevent firefighters from getting up the stairs, but could fill the stairwell with smoke and potentially create a chimney effect amplifying the fire. And even after the containment is compromised, full evacuation is a bad idea because the stairwell could be full of smoke or very high heat, and it may be impossible for residents on higher floors to pass through the floors on fire.[7]

There were other bizarre ideas advanced around how the fire could have been fought: giant ladders, water dropped from helicopters, spraying water 20 storeys into the air, etc; none of these are really practical.[7]