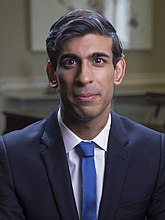 Rishi "Dishy Rishi"[1] Sunak (1980–) is the current Chancellor of the Exchequer of the United Kingdom as of 2020, and a member of the Conservative Party. He happened to take office just before the COVID-19 pandemic hit and, as such, has been responsible for steering the country's economy through the mass shutdowns and economic slump that it entered as a direct result.

The good news for the population of the UK is that Sunak put in place some economic support programmes that can be considered rather atypical of the party that he's a member of, or his Thatcherite tendency, and which almost certainly helped ameliorate some of the pandemic's worst impacts. The bad news is that he apparently had to be dragged kicking and screaming into it, since he's a believer in the pseudoscientific Great Barrington Declaration "herd immunity" approach,[2] and therefore a key force within the government in favour of delaying or blocking any kind of behavioural restriction. As such, he helped make the pandemic itself much much worse, and his policies and obstructionist behaviour helped both cause and worsen the second wave of the pandemic.

A mooted September 2020 "circuit breaker" lockdown was avoided largely because of Sunak bringing in Great Barrington co-author Sunetra Gupta, as well as lockdown sceptic Carl Heneghan and Swedish epidemiologist Anders Tegnell, to tell Boris Johnson how actually such an approach was a really good idea.[2] Sunak apparently felt so strongly about this that he threatened to quit if the "circuit breaker" went ahead.[3] This delay is estimated to have led to another 1.2million COVID cases than would not have happened otherwise,[2] which on the basis of a rough 1% infection fatality rate means somewhere in the region of an additional 12,000 deaths.

One of Sunak's more bizarre wheezes was the "Eat Out To Help Out" scheme, in which the Government spent £500million encouraging the public to physically go into restaurants by giving hefty discounts to diners of 50% of the meal cost, at the expense of the Treasury. This policy, apparently devised to create a short-term economic boost while (more crucially for Sunak) saving some money over continuing furlough payments, has been theorised to have caused between an 8% and 17% rise in COVID infections, kicking off the second wave of the pandemic in the UK, while having no real long-term beneficial economic effects.[4]

Sunak has also been very eager to end the various support schemes ahead of time, even while government restrictions remain. The current (June 2021) set of behavioural restrictions were extended by four weeks, from the 21st June to the 19th July… however Sunak blocked the extension of the furloughed worker support scheme anyway, just because.[5] The net result is likely to be either individuals losing their jobs, or being compelled to come back into work and help spread the virus some more even as a third wave appears to be starting in earnest.

See the main article on this topic: Hagiography

Despite this demonstrable tendency towards forcing government inaction combined with absurd levels of penny-pinching in anything he's not forced to do at gunpoint, which has come at an enormous medical, human and social cost, Sunak is seen as a rising star within the Conservative Party,[1] and widely tipped as the next Tory leader. The reason for this is obvious — Sunak has the benefit of not only the usual fawning (or at the very least, uncritical) media coverage that most Tories get, but he's also younger and more conventionally attractive than the average Tory, and as Chancellor during the pandemic has been able to take the credit for government spending. Conveniently, he seems to have been able to gloss over that he's had to be dragged kicking and screaming into doing anything of note.

The BBC, rather infamously, decided that the best way to represent Sunak's array of fiscal firepower was to depict him as fucking Superman[6] and talk about how he had an amazing plan to steer the country through the crisis using his "superpowers". This is something they belatedly realised was more than a bit weird and retracted in the typical condescending "you wouldn't really think we'd be biased?" way in which all such BBC retractions take place.[7]