Lee "Ingy" Ingram (or "Lee of the Ingram family", as he sometimes calls himself for some reason) is an English nationalist campaigner who co-founded English Shieldwall and is involved with the English Community Group (Leicester). He has commented on affairs across England but is particularly involved with campaigns in his home town of Leicester.

Ingram is an ethnic nationalist and sees England as being neatly divided into an Anglo-Saxon community, a black community, an Asian community and so forth. He objects strongly to non-English people being classified as English and to anyone being called "British", seeing this as a false identity that has been imposed on the English people against their will. He argues that England should withdraw from the United Kingdom, and believes that there will someday be a civil war between English people and the British government as a result of mass immigration.[3][4]

His writing style is characterised by run-on sentences, multiple references to genocide and ethnic cleansing, and accusations that anyone who disagrees with him is anti-English. Despite his capacity as official spokesman of the English Community Group (Leicester) he does not appear to have hired a proofreader.

He is also a fan of David Icke, and posts at Icke's forum under the name "anti system".[5]

Ingram was once with the English Democrats and stood in a local election for them in 2007 but later went on to criticise the party:[6]

What are the EDP doing for the Indigenous English when they need help more than ever? New Labour have aready made Britishness a civic Identity, making it a multi-ethnic mish mash of an identity, now this is not to say that I actualy care for Britishness, as I am English I do not care for Britishness.... but I live in fear of New Labour wanting to make the English identity a civic identity making it a multi-ethnic identity, helping along the genocide of the English identity... The ethnically English need help more than ever right now! we are being ethnically cleared in areas all over England, I live in Leicester and live and breath this sick project against my identity.... Now we have a political party fighting in the name of the 'English' who have actualy beaten New Labour to making our English identity an all inclusive multi-ethnic identity!! the English Democrats Party have been doing this!!!!???? What have the EDP to say in their defence?[7]

According to Ingram, one of his reasons for leaving the English Democrats was that the party contains Masons. He has also decided to reject St. George's cross as the flag of England after hearing Icke claim that the colours of the flag represent blood and semen.[8][9]

Ingram is now a member of the English People's Party and stood in a local council election in 2011.[10] 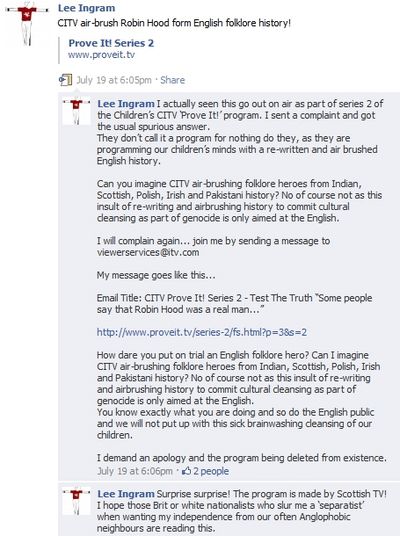 Er, Lee, has it occured to you that maybe the show focused on Robin Hood because, unlike the majority of Polish folk heroes, kids in the UK are actually familiar with the character? 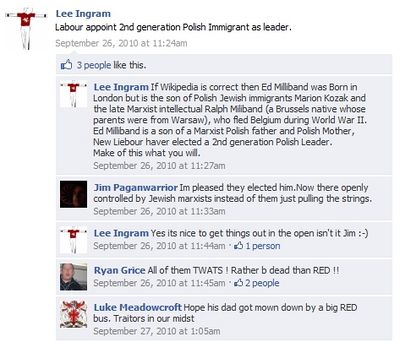 Ingram sees himself as the mortal foe of anti-English attitudes. A noble ambition, but, sadly, let down by his ridiculously broad definition of "anti-English". This is a man who thinks that denying the existence of Robin Hood is "anti-English".

One of the more curious incidents in Ingy's campaigns came when he posted a thread at the Cross of St. George forum titled "High Treason... many are guilty", which consisted soley of a link to an essay by the white supremacist and anti-semite Kenneth McKilliam‎ without further commentary. McKilliam's essay argues that Britain is a "Christian nation," that Muslims should be deported, and that "Jews have no right to sit in our houses of parliament, nor on our local government councils. They have no right to be in the judiciary nor to hold office in the executive of government nor in the police force. All purported laws and purported acts of parliament in which Jews have taken part in the voting are illegal, unconstitutional: null and void."

Ingram then posted a reply to his thread arguing that "The penalty for Treason is death! So if even [the Sex Pistols] can be investigated under the Treason Act for their song and view, then surely Muslims and any one aiding their cause, which includes political parties such as Labour etc should be investigated under the Treason Act these days?"[11][12] He subsequently claimed that he did not know anything about Kenneth McKilliam and just found the article a discussion point, which would mean that he simply wasn't paying attention to what he was linking to.

Ingram co-founded the English Shieldwall campaign group with fellow nationalist Youngy in 2010.[13] However, later that year the two men had a falling out; exactly what happened is unclear, but Youngy says that Ingram threatened him, while Ingram claims that he had confidential information given out by Youngy.[14] Judging by Ingram's version of events the falling out occurred as a result of Ingram's views on the military: in contrast to the "support our troops" stance of his fellow nationalists, Ingram believes that the British army will one day become the enemy of the English during his predicted civil war.[4]

The dispute between the Shieldwall's founders went on to take a downright nasty turn. "as [sic] it ever occurred to you that I may have stepped out of the criminal underworld many years ago," Ingram asked Youngy, "or that I am from a criminal underworld family that made headlines way back in 82 in the Leicester Mercury April 1st 'Police twice kicked door open, say bottle case couple' , the 2nd 'Police bid to recover Gems was disastrous', the 3rd 'Bottle threat mother is jailed for six months' & the 5th 'Bottle attack man is jailed' & 'No-go area claim is rejected by Police'."[14] He continued:

The Police know my family well, as they were on the receiving end of violence from my family with both my parents being banged up at the same time due to this, this 'may' have been the start of the Police harassment, it ‘may’ have gone on for years, they wanted me banged up many years ago as I grew into their enemy as an adult following my family tradition, but they only got a small taste of catching me, hence why do you think they take an interest and visit me a lot concerning Demo’s and my campaigning etc? They still haven’t forgotten or forgiven me and want to pin anything on me as I’m back in the public eye, I’m an old target of theirs flirting with them again in their eyes.

I turned over a new leaf approx 14/15 years ago and have kept my nose clean for many years, I basically don’t get into trouble any more unless having to self defend of course, and left the criminal underworld with lots of respect from many within the criminal underworld, and there are many of my family and friends and friends of friends who ‘may’ still be within the criminal underworld and many of them ‘may’ still respect me and my family and some ‘may’ owe me favours and some ‘may’ be involved in the EDL too, has it occurred to anyone why so many of them get arrested with some spurious charges and some charges not relating to the Demo’s to add to their troubles? Do you think I give names and evidence of threats to the Police? Has it occurred to anyone that I ‘may’ have given names and evidence of threats to those in opposition to the Police? Calling in old favours ‘maybe’?[14]

Ingram now claims that this was a fearful reaction to a violent threat and a death threat. At the time of this dispute Ingram was a member of the Anglo-Saxon Foundation, which hosts the official English Shieldwall forum. "Oh my god, what a shit stirring two-faced fool", said ASF owner "Seaxan". "I shall be deleting his account from the ASF forum as I think what he has done is a danger to the cause." Another member ("Wodenswulf") suggested that Ingram was a mole working for Unite Against Fascism.[14]

After the Steadfast Trust issued guidelines for setting up regional "English Community Groups" Ingram became involved with running the first group of this kind, based in Leicester.[15] The group has a somewhat eccentric website: "An opposing terrorism tainted verbal assault course emerges from the first breath of self concern from the English community," it declares. "We have the handicap of Brit state implanted irrational Anglophobia against us from the off, so much so that you would be forgiven for believing that our words were morphing into sniper rifles and challenger tanks."[16] Elsewhere the site proclaims that "if someone suggests that an African Caribbean can be English then they are suggesting that there is no African Caribbean community."[17]

Ingram describes himself as a "BNP sympathiser"[18] and argues that Nick Griffin deserves a medal. [19] He has, however, criticised the BNP for not emphasising England enough.[20][18]

Ingram has spoken critically of the English Defence League, accusing its founder Stephen Lennon of "promoting all things diverse, multi-cultural, multi-ethnic, multi-religious which is promoting the root cause of what the EDL are opposing... if it wasn’t for the promotion of diversity, multi-culture, multi-ethnicity and multi-religion in England then we would not have Muslim extremists here in England." He went on to complain about the group using the term "English" in its name when it is open to non-english people, and concludes that "The EDL just like the English Democrats Party are committing identity feft [sic] of the English".[21]

Ingram seems to have a thing for online petitions. At one point he campaigned heavily against a proposed statue of Mohandas Gandhi to be erected in Leicester, starting a "No Gandhi Statue" petition;[22] he had a point, as Gandhi has precious little to do with Leicester. He instead proposed a statue of Alfred the Great's daughter Aethelflaeda,[23] which puts him above the people who wanted Gary flippin' Lineker

Ingram comes quite close to the bizarrely warped version of the left-right political spectrum held by the Religious Right in the US, as he regards even the Conservative Party as anti-English and "far-left".[26] Presumably he considers that the real far-left political groups in the UK, such as the Trade Unionist and Socialist Coalition or Communist League of Great Britain (to pick just two), vanish beyond an event horizon in the distance. That is, if he even draws a distinction - he says that the three main parties all "seem infiltrated by Communists or any other countrries people who want to ruin the political system here".[27]

The hatred that some settlers in England have for the English is combined with the communal self loathing and guilt of traitorous English liberals to produce a steady flow of anti-English propaganda [...] The liberal dictatorship machine churns out that we are all racists, end of, no chance of reply, no debate and when a debate is held the contributors are usually handpicked in favour of the liberals.

Unlike many on the nationalist right, however, he is supportive of homosexuals (so long as they're nationalist homosexuals) as can be seen in his attack on the homophobic Muslim Daw’ud Mannion:[29]

...some gay people may be nationalistic towards the English and England and so I would not dismiss their patriotism due to their sexuality... [homosexuals] were born that way, unlike Daw’ud Mannion who actually chose to follow a disgusting homophobic religion or had it brain washed into him from very young no doubt.

He opposes curry being eaten at Christmas.[30]

Ingram also sees a relation between his nationalist views and the freeman on the land movement.[31]