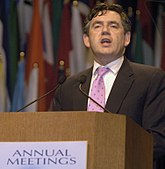 Gordon Brown (1951–) was the leader of the British Labour Party from 2007 to 2010, and served as Prime Minister of the United Kingdom during that time. His transfer of power from Tony Blair in 2007 was essentially a bloodless coup, as he chickened out of calling an election that year, or the next year. Or the year after that. The year after that he legally had to. Which sucked for Labour, because they went down. Bigotgate was the final nail in the coffin,[1] but Brown was in the coffin long before that. His popularity had already hit rock bottom within months of him taking office, and the party itself has been in the political wilderness ever since.

In an effort to woo the lovely Nick Clegg, he fell on his sword following the UK elections in the spring of 2010... but fell ever so slowly as he wasn't actually ready to leave until the autumn. He then largely kept himself out of the spotlight until being proclaimed "Saviour of the Union" in 2014.[2]

Gordon Brown was born in 1951 in Glasgow, Scotland. He gained a Ph.D in history from the University of Edinburgh and was elected to Parliament in 1983 as an MP for Dunfermline East. Despite Brown's dour public image, he's said to be quite witty in his private life and is a personal friend of J.K. Rowling, author of the Harry Potter series.

Brown's poor social skills may be due to his eyesight problems. He is blind in one eye as a result of an injury sustained playing rugby as a boy and has poor eyesight in the other. He has also been speculated to have Asperger's syndrome.

There was a "gentleman's agreement" between Blair and Brown ahead of the Labour leadership election in 94. Both were the frontrunners and worked out a deal whereby Brown step out of the race and support Blair, and in return would be given significant say over policy and be first in line when Blair retired. No timescale for Blair's retirement was set, but Brown thought he only intended to serve as PM for about a few years. Over time their relationship grew bitter as Blair grew too cozy in his seat, and then they pretty much refused to communicate, leading to comedy like this.

It's interesting to see the difference in their phone convos. Blair sounds like a game show host, even in private. But if you scroll down to the part with Brown, he immediately starts talking numbers and stays on-point, with no small talk.[3]

Brown served as Chancellor of the Exchequer under Tony Blair from 1997-2007, at which point Blair left office and Brown was crowned leader of the Labour Party and Prime Minister. Brown made many positive contributions as Chancellor of the Exchequer but even this phase was not without its stains. He managed to sell off Britain's gold reserves, among the most valuable in the world, at rock bottom prices and get practically nothing in return, increasing the country's slide towards bankruptcy.[4]

You say goodbye, I say hello[edit]

As Prime Minister, he promised to "bring an end to spin." This, ironically enough, became the new spin. He was also a notorious micromanager.[5]

Brown was often criticised for a lack of charisma and social skills, unlike his predecessor, a Master Class spin-doctor and smooth-talker. Gordon Brown was criticised for being 'unelected' in the sense that people voted for Blair, not Brown, in 2005. After a mere year in power he had managed to reduce the Labour Party's popularity to the same low level that Margaret Thatcher took eleven years to achieve for the Tories,[6][7] although, in fairness, Labour's popularity had been steadily falling for years. People don't really know what they want. After a solid decade of Blair, people were really pleased to see Gordon Brown because he was characterised as a "conviction" politician rather than being obsessed with spin and appearance. Then they realised he couldn't smile properly and was a bit weird. BACK TO SPIN, PLEASE![8]

Interestingly, Brown virtually receives no credit for being the a prime instigator of the international salvage plan for rescuing the global financial system after the 2008 crash - yet again shows that image is valued far far more than positive action - and confirms the adage that a prophet is rarely recognised in their home country. His successor as Prime Minister, David Cameron, pettily vetoed the appointment of Brown as head of the IMF so as to deny him due international recognition (better to have a non-entity in charge such as Christine Lagarde than a member of the other major UK party). It enabled Cameron, the Tories and their right-wing friends in the press (that is most of the UK media) to perpetuate the long-standing myth that the Labour Party was solely responsible for the global financial crisis and therefore the need for sustained austerity that should be focused (yet again) on the hapless UK citizens but not profligate bankers who were the prime cause of the melt-down (see George Osborne). Plus ca change, plus c'est la meme chose. That many of the right thinking Tory/UKIP Brexit supporters still accept such obvious bollocks tells you that if you repeat a lie often enough, some people will believe it (as well as telling us too much about the current standard of voter intelligence in the UK).

Brown is the son of a former Minister and a member of the Church of Scotland. He does not talk about his religious beliefs, but, carrying on Blair's mission to please everyone all the time (at which he failed miserably) he has claimed that all philosophies (religions from context) share the same root motivations, and are about helping one another.