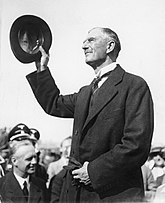 Arthur Neville Chamberlain (1869—1940), a member of the Conservative and Unionist Party, was Prime Minister of the United Kingdom from 1937 to 1940. He had been a Member of Parliament since 1918, and his father was Joseph Chamberlain, himself a prominent politician who served as a government minister and leader of the opposition. As Chancellor of the Exchequer from 1931-37 he advocated a tariff system to protect trade with the British Empire, and badmouthed Wallis Simpson during the 1936 Abdication Crisis.[1]

Chamberlain is now remembered chiefly for declaring, upon his return from a meeting with Adolf Hitler in 1938, "I believe it is peace in our time," while gesturing with a piece of paper. This has left him with the reputation of being an appeaser in the face of antagonism. Britain declared war on Germany in 1939. Chamberlain has been subsequently castigated as a weakling (possibly true) in the face of German aggression (certainly true).[2] What we should bear in mind is that Chamberlain didn't do anything wrong by talking with Hitler — he erred by giving him half of Czechoslovakia, especially given that no Czech or Slovak was consulted on their opinion on the matter.[3]

Following the fall of Norway to the Nazis in May 1940, he lost a large measure of parliamentary support, and the Labour Party agitated for his resignation as a precondition for entering a coalition government with the Conservatives. He was replaced by Winston Churchill, who as First Lord of the Admiralty was largely responsible for the Norway debacle.[4]