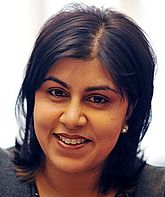 Sayeeda Hussain Warsi, Baroness Warsi (1971–) is a British Conservative politician. She is the first Muslim woman minister in the UK.

Ratna Lachman, director of Just West Yorkshire,[2] claims the UK Conservative Party leadership style is WASPish (white, Anglo-Saxon Protestant) and male, and that Sayeeda Warsi's appointment was "tokenistic". Lachman also argues that, while Warsi was active in helping to develop policies on counter-terrorism, she failed to prevent the erosion of minority rights.[3]

Warsi herself has complained that too many high ranking Tories have a privileged background.[4] Baroness Warsi is unelected, having lost an election to her Labour Party opponent but received a seat in the House of Lords and the Cabinet without parliamentary experience.[5]

In August 2014, she resigned from her position as Foreign Office Minister over the UK government's pro-Israeli stance on the conflict in Gaza.[6]

In 2005 Warsi's campaign issued leaflets condemning Labour for allowing homosexuality to be "promoted" to school children, equalising the age of consent for homosexuals and heterosexuals, and for promoting gay marriage. She later did an about-face and began promoting civil partnerships herself.[7]

Somehow Warsi claims that there is a "proper" (however defined) place for religion in public, that strengthened religious identities "ensure social harmony":[8]

So today I want to make one simple argument: That in order to ensure faith has a proper space in the public sphere, in order to encourage social harmony, people need to feel stronger in their religious identities, more confident in their beliefs. In practice, this means individuals not diluting their faith and nations not denying their religious heritage.

Is this reasonable? Intolerance leads to, well, disharmony.

Faith inevitably leads to the assumption, that whatever contradicts 'The Faith' is wrong and that can lead to intolerance.

The British Humanist Association sees her remarks as, "outdated, unwarranted and divisive"and their chief executive Andrew Copson added, "In an increasingly non-religious and, at the same time, diverse society, we need policies that will emphasise what we have in common as citizens rather than what divides us". [9]

In February 2012, after secularists objected to an official visit from Benedict XVI,[10] Warsi railed against a perceived "militant" secularism taking hold of society. Citing religion being "sidelined and downgraded in the public sphere" and religious symbols being removed from public view, she compared this "militant" secularisation to totalitarian regimes. [11] By contrast the secularist Copenhagen Declaration on Religion in Public Life addresses issues like freedom of conscience and the right of all to participate in the democratic process which is hardly totalitarian. Proponents of religion in the public sphere do not accept proportionate time for groups like the National Secular Society to state the case against religion or for the British Humanist Association to explain alternative secular moral systems in the public sphere. Religion in public without the opposing view is more totalitarian than the secularist position. The National Secular Society fears the introduction of "theocratic" laws reducing freedom for secularists and the British Humanist Association is also uneasy because other politicians with faith agendas are prominent in the government.[12][13] Despite this different people saw her removal from the Cabinet as a demotion. Yet another view was that the appointment of a Muslim showed declining Christian influence in the UK.

Warsi fought to reduce secularism in the UK and Europe but she swam against a strong tide.[14] In late summer 2012 Warsi was appointed Minister of Faith. After Warsi's resignation the post was given to Evangelical Christian, Eric Pickles who has also been accused of misrepresenting secularism.[15][16] The future of the department and its agenda remains uncertain.

Warsi objected to the European constitution having no mention of God or Christianity, arguing that Christianity has played a defining role in shaping European society.[17] Warsi visited the Vatican in early 2012 and discussed with Pope Benedict XVI how she hoped Christianity can be brought back to a "central role in British public life." She did all this despite a poll by Mori finding 74% of UK Christians think religion should not specially influence public policy.[18]

Warsi believes that Islamophobia appears to be socially acceptable in British society, and criticises stereotyping of Muslims as either extremists or "moderate" Muslims.[19] Warsi's speech was not welcome in the Tory Party and may have led to her demotion from the Cabinet.[20] Warsi’s efforts to prevent people distinguishing between moderate and extreme Muslims may further be counter-productive as many UK people do not know which Muslim is moderate and which is extremist.[21]

Warsi has complained Muslims do not speak out enough against radical Islam[22] but has also supported Hamas.[23]

Warsi married her second husband, Iftikhar Azam, in 2009. Shortly after the wedding, claims emerged from the family of Azam's ex-wife, Massarat Bi, that she (who does not understand English) was unaware that Azam was divorcing her until after the divorce had been finalised. These claims were publicised by that bastion of fair reporting about Muslims in Great Britain, the Daily Mail, along with accounts of violent behaviour towards Bi and the Mail report by members of Bi's family during the Mail's investigation.[24]