From RationalWiki
(Redirected from Lottery)
Jump to: navigation, search

"Gambling Down Below" from Life on the Mississippi by Mark Twain

Gambling is the wagering of money in games of chance, such as lotteries and roulette, or involving some combination of chance and skill (mostly the former), such as poker or betting on sports.

See the main article on this topic: Sin

Gambling is often considered a vice, and among some holy-rollers,[note 1] it is a sin. Consequently, casino-style gambling is illegal in many places. Places where it is legal and widespread (e.g. Nevada, USA and Monte Carlo, Monaco) have a thriving tourist industry, and since the 1980s, numerous Native American reservations in the United States have been able to profit from casinos because tribal sovereignty limits the ability of state governments to restrict gambling on reservations. However, most places allow some forms of legal gambling, even if it is limited to state lotteries or church bingo.[note 2]

The most important evil of gambling: you will probably lose your money. Pursue it strictly for amusement value, on the assumption that the money you will probably lose is the cost of a good time and the knowledge of how casinos prey on vulnerable people. Never forget that any casino is the product of many thousands of man-hours of applied behavioral psychology.

Into the environment is woven every psychological stratagem imaginable that has the effect of reinforcing the behaviour of playing and betting; indeed, nearly every aspect of the environment is crafted to that end. The most obvious of these is providing free ("comped") alcohol to anyone who is gambling, which is standard practice in casinos in tourism-dependent areas like Las Vegas (a.k.a., "Lost Wages") but illegal in much of the Midwest, though other methods like making the exits hard to find or designing the building such that non-gambling patrons must still pass through the casino floor area have also proven quite successful.

Some people get psychologically addicted to the feeling of gambling. This leads to much grief.

Research also demonstrates how the brain can get addicted to gambling.[3] And that there is also evidence that older people are more vulnerable to gambling addiction.[4]

A number of purported methods exist for beating the odds in games of chance, such as slot machines and the lottery.

Winning lottery numbers are traditionally posted within the Church of Denmark

One of these is the use of computer programs in which one enters recent winning lottery numbers, and the program attempts to select the most likely next winning combination of numbers. This is patent nonsense and a massive misunderstanding of probability, since winning lottery numbers are selected entirely independently and at random. Anyone who thinks a combination of numbers is more likely to be selected because it hasn't been selected before needs a basic class in statistics.

Some systems claim they select lottery numbers that are less likely to be picked by other people, so that the expected win will be higher. However, although these systems decrease the chance that a winning bettor will be compelled to share the pot with others, this is the only way in which they increase payout; in particular, they do not in any way increase the odds of that bettor holding winning numbers.[note 3]

From time to time, some lotteries have an abnormally large jackpot (for instance, if it's not won, the prize "rolls over" to be included in the following week), where purchasing a lottery ticket would technically have a better payoff than not purchasing one. However, this only applies to short term lottery play; if you attempt to perform the same trick over the long term, the growth is only positive if you are already a millionaire.[5]

Also, it's important to point out that all of this is true only if a lottery or other bet is considered solely as an investment, with only monetary rewards considered. In other words, gambling is an extremely poor investment strategy, but a person who approaches gambling as something other than an income stream (e.g., who views excitement, amusement, camaraderie, thrills, or similar experiences connecting with gambling as a reward) may well decide that a bet is amply rewarded.[note 4] 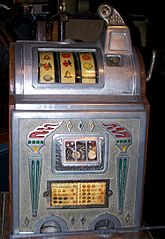 Slot machines are a more complicated matter since they use algorithms generating pseudo-random numbers and theoretically this combination must eventually repeat since they are not truly random. However, properly constructed slot machines are designed to defeat attempts at discovering this sequence by constantly generating pseudo-random numbers even when the machine is not being played (or in the case of older mechanical ones, have another form of avoiding predictable patterns).

With card counting, it is possible to beat the odds in some card games such as Blackjack. However, some casinos have taken countermeasures to make this tactic more difficult (usually by just adding more decks into the shoe and by not dealing all the cards) and thus ensure that the house always wins over the long run. The players that are capable of resisting even these tactics will be threatened, and later barred from the casino franchises, or at least from the blackjack tables.[6] With the growing popularity of continuous shuffling machines at casinos (which quickly reshuffle the cards that were just used into a constantly-shuffling pool of cards to deal from), card counting may soon become obsolete, at least at any casino with the budget or inclination to put a machine at every table.

There are also some card games, notably the most popular version of baccarat

(which is not the one described in the Ian Fleming book Casino Royale), where card counting is completely useless because they are pretty much entirely games of chance. Despite this having been known, in the case of baccarat, for a long time, it hasn't stopped people from trying.[note 5]

The Martingale System is a betting strategy that works only statistically doesn't work, even if you happen to be richer than Bill Gates. It works thus: In a game of chance, you put up your original stake to bet. If you lose, you double your bet. If you lose again, you double your bet again. Because you have to win at some point, you just keep doubling your bet every time and eventually, you will make all the money back plus the original stake. Obviously, this system requires very large sums of money readily at hand, which the house is always happy to relieve you of.

If a game offers a 20% chance of winning, then on average the player will win one time in five, and on average the doubling will have reached 25( = 32) times the original bet, and for safety's sake it is probably best for the player to arrive with 28 or 29 (256 or 512) times the original bet. (With the given odds of winning, the odds of a 9-consecutive-game losing streak are 1,953,124 to 1 — rolling 1 simultaneously on 3 separate fair dice is equivalent to rolling {1,1,1} sequentially on one fair die.) If the initial bet is small (say, less than $5), then this is feasible. However, as the per-bet chance of winning decreases linearly, the required reserves increase geometrically. Furthermore, the mechanics of the system imply that on a 20% success-rate game with an initial bet of $1, the bettor will, on average, fall into the position of staking $32, $64, $128, or $256 to secure an effective payout of $1, and may lose an arbitrarily large amount of money in the attempt. This system therefore is a fine real world example of the sunk cost fallacy.

Over the long term, a cursory understanding of probability tells us that any finitely long streak of losses is guaranteed to occur eventually, giving the martingale a probability of ruin equal to one. This remains the case for any betting scheme that sizes bets independently of the expected value on the bet (card counting, noted above, tracks this expected value and wins because it sizes bets accordingly).

Speaking of the real world, this principle led the currency trader Nick Leeson

to repeatedly redouble losing bets on East Asian currencies, until his losing position reached over 9 billion British pounds. In so doing, he bankrupted his employer, the major British bank Barings. 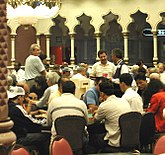 Poker is a unique gambling game because instead of playing against the house, you compete against other players. Although luck plays a part in the short term, in the long term skill, table selection and strategy determine a player's average win or loss rate. All players can benefit from learning the basic strategies and by becoming proficient in working out the odds of hands being made in comparison with the size of the pot. Of course, the best strategy for winning at poker is to be the house and win every hand by collecting rake.

As with other gambling games there are mountains of woo and "systems" for poker that are either outright bullshit or have a grain of truth and are misapplied by amateurs. There are also some easily detectable cheating methods.

How to win at roulette[edit]

La Roulette in the Casino, from Monte-Carlo: hot9

(Occasionally, the physical properties of a roulette wheel might bias it enough for a winning strategy to exist, as notoriously turned out to be the case once in 19th-century Monte Carlo, when nine genuinely "hot" numbers let a player take the house for roughly two million francs.[8] Unfortunately for the enterprising gambler, modern casinos keep careful records for just this reason. This problem is not helped by the regular re-balancing of wheels, which are also made to much more precise standards today than in ages past.)

Gambling is not to be confused with placing monetary value on one's confidence in a predicted outcome. For example, a player holding a royal flush can justifiably be extremely confident that nobody at the table holds anything that can beat it.[note 8]

Similarly, investing money in a business judged to have a large available market and a solid business plan is not gambling because the decision is based on foresight, prudence, and due diligence rather than random chance.

Asking a pundit to place a bet on a given prediction is a method of clarifying whether said prediction has rational support, or is simply rhetorical.