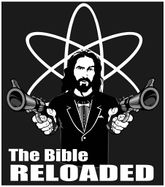 For all of our safety, the largely defensive weapons of gun seen above are locked and loaded.
thebiblereloaded.com, a Christian website that sells Chick Tracts, provides this ringing endorsement: "This website is in no way associated or connected with the negative YouTube channel".[1]"

The Bible Reloaded (TBR) and The Quran Reloaded are American atheist YouTube channels run by Hannah and Jake (formerly Hugo and Jake). Their videos focus on Bible/Quran study mixed with pop culture and some humor. They are known for dramatic readings of Chick Tracts and long-form movie reviews.

TBR has so far analyzed 100+ (!) Chick tracts and videos from Chick Publications.[4] Some gems include:

These long-form movie reviews take down the tropes and bad writing (often inextricable) of Christian film:[6]

The Bible Reloaded vs. Five and Two Pictures[edit]

In 2016, the Christiano Film Group (also called Five and Two Pictures) filed DMCA takedowns of five of The Bible Reloaded's movie reviews. In response, TBR decided not to just file counterclaims but to outright sue the production company to prevent any more cases of DMCA takedowns.[8] As of March 2017, they have raised about $85,000. TBR released a video discussing the resolution of the lawsuit on March 27.[9] The gist of the case is, the person who filed the false claims had gone nuts over something said on social media, and the Christiano Film Group completely disowned his actions and were very sorry for the incident.

With the exceptions of Steve Shives (later disowned), AronRa, Matt Dillahunty, and Arian Foster, all the guests on their Chick Tracts video series have been YouTube antifeminists. On Twitter they have stated that they don't know if they are antifeminists[20] but that they are against "Shivesian" feminism. They expressed pro-feminism in their reviews of Christian movies[21] and have a video rebutting anti-feminist youtuber Undoomed.[22]

They have a series discussing and rebutting Jordan Peterson's Twelve Rules for Life.[23]