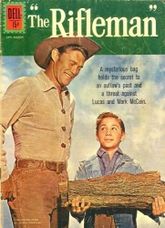 "So, Billy... You ever cradled a grown man's wood in your arms before?"

A euphemism is a word or phrase used as a way of saying something without actually saying it directly. Some euphemisms are metaphors, while others are only substituting one word for another.

Euphemisms may be used to avoid offence, to put a certain 'spin' on a situation, or to avoid referring directly to something which is considered taboo, such as sex, death, or bodily functions. Sometimes they are used to conceal the true meaning of a conversation when discussing something in public. This explains the origin of many of the slang words for illegal drugs.

Ironically, the word "euphemism" (from a Greek phrase meaning "to speak words of good omen") was itself a euphemism for remaining silent — obviously, the best way to avoid saying something that might be taboo or offensive is to just keep your mouth shut.

There are probably more sexual and anatomical euphemisms than any other kind. Some of them, such as "making love" or “seeing someone else”, are used to refer to sexual subjects politely and without causing offense. Others are cruder and exist largely for amusement, such as "spanking the monkey" and many, many other euphemisms for masturbation. Really, combine a verb and a noun (or two “nouns“), and chances are someone used it at one point or another to refer to some sex act of some kind, even if (or especially if) the reference was extremely obtuse. Chopping the wood? Washing the dog? Waxing the convertible? Reloading the rifle? Sandblasting the picket fence? Admit it, they all sound dirty.

There are also many euphemisms that are meant to de-sex other parts of the anatomy — and, by extension, things that are reminiscent of those other parts of the anatomy.[note 1] Many of these euphemisms were products of the Victorian Era. For instance, a leg of poultry became a "drumstick", thighs became "dark meat", and breasts became "white meat". A woman's legs became mere "limbs".[note 2]

Alcohol and its use inspire euphemisms. Alcoholic beverages can be called such items as "sauce" and "antifreeze" (although antifreeze itself would be more hazardous than alcoholic beverages, and ironically alcohol itself is used as an antidote for antifreeze poisoning). Someone drunk might be "buzzed" or "tired". A heavy drinker (the usage itself a euphemism for "alcoholic", which was itself originally a euphemism for “drunk”) might still call himself a "social drinker" as opposed to a "problem drinker". Taken to an extreme, essentially any noun can be used euphemistically to mean "drunk"; for example, "Last night I got totally gazeboed with my friends." or "Joyce left the party pajamaed."

Alcoholics may have their own euphemism for a temporary time of sobriety: "on the wagon".

Euphemisms are used extensively in politics, media, and public relations, often to whitewash or downplay negative subjects. An example is using words like "casualties" or "fatalities" to refer to deaths in a war or disaster.[note 3] These words arguably dehumanise the subject of death to some extent, and are often used in the context of reducing people's lives to a statistic. Military jargon has developed many such phrases, such as "collateral damage" to refer to putatively unintended civilian deaths in a conflict. An early example of this is the phrase "concentration camp", which was coined by the British circa 1900, since it was thought to be more neutral-sounding than "prison camp", although it later assumed even worse negative connotations after its use in World War II and after. Vietnamese and Lao communists called their harsh and frequently lethal concentration camps "re-education camps" for persons associated with the previous, non-communist régimes.

At the extreme, Nazi Germany used such terms as "protective custody" (Schutzhaft) for an arrest likely to result in brutal treatment in prison if not murder, "special treatment" (Sonderbehandlung) not to suggest 'privileged treatment' of a captive but instead summary execution, and "Final Solution of the Jewish Question" (Endlösung der Judenfrage) as a benign-sounding answer to some philosophical exercise but in practice the Holocaust.[note 4] Similarly, during the Iraq War, "enhanced interrogation" arose as a euphemism for torture, and arguably the the Second Viennese School was using “emancipation of the dissonance” as a euphemism for emancipation from the concept of dissonance.

A typical sentence at the end of a trial in the Great Purge was "ten years without the right of correspondence". The convict would be astounded by the superficial leniency of the sentence, but the absence of any right to correspond would be rigidly enforced. The convict was quickly executed by gunshot, precluding any possibility of corresponding with anyone, ever.

Many politically correct terms are euphemisms, created to avoid offence by being indirect about a sensitive issue, such as a person's race or disabilities, or to replace a more offensive phrase. This is the focus of many of the critics of political correctness, who claim that it is disingenuous and intended only to cloud language with pointless subtleties. In most cases, however, the new terms are coined because previous words or phrases have become unacceptable, via the process known as the "euphemism treadmill". 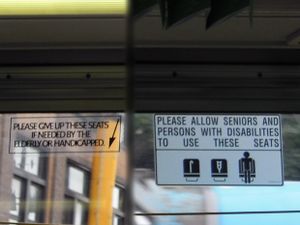 An illustrative example of the euphemism treadmill: signs above the peanut-row seats on a Minneapolis city bus, 1980s-era and current.

It quickly becomes apparent what a euphemism means and why it is being used. Hence, it rapidly takes on all the connotations of the original word or phrase it was used to replace. Consequently, new euphemisms are created as a substitute, and they in turn take on the original connotations and are gradually replaced with newer euphemisms. This phenomenon is known as the "euphemism treadmill".[2]

Examples of the euphemism treadmill include the many words used to describe people with mental disabilities; "idiot", "imbecile", "moron", and "cretin". Historically, the first three referred to people with IQs in the range of 0-20, 20-49, and 50-69 respectively,[3] while "cretin" was a medical term referring to stunted physical and/or mental growth caused by either a deficiency of thyroid hormones or a prolonged deficiency of iodine.[4]

These terms were all used historically for people with various kinds of mental impairment. Eventually, they became used more widely as general pejoratives — hence they were replaced in a medical context during the twentieth century with phrases such as "mentally retarded" and "spastic". Again, these came to be used out of context as offensive insults, to the point where they were considered decidedly politically incorrect, and were replaced by newer phrases such as "mentally challenged" and "special needs", some of which have also come to be used offensively. Meanwhile, the original terms such as "idiot" and "moron" have entirely lost their clinical connotations, and are used freely to describe people whose behavior or opinions we find to be "stupid" without actually implying that they are disabled. The story of this treadmill is an excellent example of how "political correctness" often makes terms more and more ambiguous under a series of catch-alls: the specific "idiot", "imbecile", "moron", and "cretin" are blanketed with the still DEFMP[note 5] term "retarded". That word is then blanketed by the quite ambiguous (i.e., too ambiguous to have much meaning in environs where a specific definition is required) "special needs", covering such a wide range as Asperger's syndrome (even the high end of the spectrum) and blindness (where the necessity for modified needs comes from a physical, as opposed to mental or social, problem). What will blanket this is as yet unknown, but it reminds one of George Orwell's 1984 in the way that concepts of liberty and equality are lumped under "crimethink" and objectivity and rationalism under "oldthink" by the government to be "politically correct".[note 6]

"Pinhead" is another once-popular term[note 7] that has experienced a resurgence thanks to Fox News personalities Glenn Beck and Bill O'Reilly.[note 8] The term "pinhead" originally referred to a person with microcephaly, a birth defect that causes the circumference of a person's head to be at least two standard deviations smaller than average for a person of the same sex and age. Most people with microcephaly have shorter life spans and diminished mental abilities.[5]

In addition to being annoying to everyone else, the euphemism treadmill isn't fun for disabled people, who would really prefer if people stopped using the names for their conditions as insults.[citation NOT needed]

More modern euphemisms for disability include:

People with disabilities have pointed out that this is getting ridiculous. Campaigns like #SayTheWord and #JustSayDisabled encourage people to stop hiding from the word "disability" already. Saying that someone "is disabled" or "has a disability" is the best usage.

In recent years, people have opted for using scientific language, and choosing person-first language or identity-first language to describe disability. The disability that was once referred to as "mental retardation" is now more appropriately called "intellectual disability". For example, a person with Down syndrome is simply called a "person with Down syndrome" instead of a "Downsie" or "mentally challenged individual" or "special superstar" or whatever you could invent. Rather than create new terms to describe conditions while beating around the bush, disability rights activists now focus on preventing the scientific terms for disabilities from taking on offensive connotations. (Because if people stop being jerks, there's no need to move the treadmill.)

Due to the constant threat of libel, mainstream media, particularly in the United Kingdom, often uses euphemisms which cannot be proven to be defamatory. "Tired and Emotional", originally coined to describe the fairly habitual state of British cabinet minister George Brown in the 60s, and "Jetlagged" are often used to imply drunkenness, without making the direct accusation.

Biblical Hebrews enjoyed strong taboos against the strong magic of using the Name of God — hence the euphemisms associated with the tetragrammaton. Some Anglophone ancestors toned "God's blood" down to "'sblood" and "God's wounds" to "zounds". They expostulated "Marry!" rather than invoking the name of the Blessed Virgin Mary (BVM), though respelled this way it arguably invokes holy matrimony anyway.

In the 21st century, the frequent use of "God" or "Jesus" in blasphemous "cuss"-talk (alone or in various compounds) may encourage sensitive and repectful souls to speak not of "God" but of "the Deity", not using the personal name of "Jesus" but preferring a euphemistic title: "the Christ" or "Our Lord". And "Satan" or even "the Devil" becomes bowdlerised as "Old Nick".