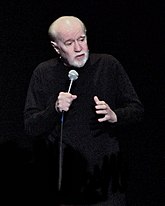 George Carlin (May 12, 1937–June 22, 2008) was one of the world's greatest comedians.[2] He was one of the greatest champions of anti-censorship and free speech in the United States. He is possibly best known for his most famous work, a dissertation on the highlights and flaws of an aristocratic society, entitled Shit! Piss! Fuck! Cunt! Cocksucker! Motherfucker! Tits! This performance led to a landmark Supreme Court decision[3] that allowed the FCC to regulate certain 'indecent' words, now popularly referred as the seven dirty words

, on broadcast television and radio. He was well known to be pessimistic awake, hateful angry, and profane a master of words, and loved to take apart the idiocy that is human language.

He wrote several books (all of which were best sellers), and received numerous awards. He also played Rufus in the Bill and Ted films, and Cardinal Glick in Dogma.[4] He died some time past, and a little bit of light went out of the world. But the great thing about it was, he left us hours and hours of audio and video.[5]

He also narrated the American version of the TV show Thomas the Tank Engine and Friends for the first four seasons.

Carlin is often revered by conspiracy theorists (mainly the libertarian Illuminati/Truther Ron Paul variety) because of a scathing piece he performed in his later years, in which he says, among other things, that politicians exist to give the illusion of freedom of choice, and his questions regarding 9/11. Strangely enough, Carlin himself never outright said that the U.S. government perpetrated 9/11, so we guess that he must have been a puppet of the Illuminati, and not the hero the cranks make him out to be?

One of Carlin's later routines on environmentalism was highly critical of the "...self-righteous environmentalists, these white, bourgeois liberals..." for their self-important veneer of altruism and denial of the fact that what is at stake is not the planet's mere existence, but the planet's habitability for them and other living things. Predictably, his message went over the heads of climate deniers,[13] who took the video as evidence that he agreed with them, gleefully reposting it on YouTube under such dishonest titles as "George Carlin on global warming".[14] Their efforts are rather undermined by the total absence of any talk of global warming in the video, and the fact that Carlin has elsewhere acknowledged its existence[15] and criticized humans for ravaging and not caring about the environment.[16]

Related to the environmentalism is his stance against political correctness. Carlin was famous for his stance against soft language (ex. using physically challenged or differently abled in place of cripple) though plenty of his misaimed fans take this as a free ride to use whatever terrible words they want and be as bigoted as they'd like.

"I didn't say half the things I've said"[edit]

Given his popularity and dead-on-target wit, it was inevitable that some quotes which sound like they're by George Carlin, but weren't really by George Carlin, would eventually start making the rounds. Snopes has more than one article about false e-mails claiming to quote Carlin, often involving made-up political rants or glurge. In 2001, Carlin said of these fake quotes:

Among the things George Carlin didn't really say? The phrase "I didn't say half the things I've said." That was Yogi Berra.