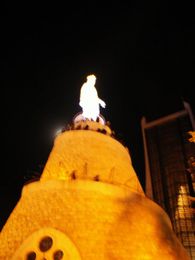 Lebanon is important because there are Christians there.
Lebanon

Lebanon is a town in southern Maine, eastern Connecticut, or Oregon, depending on which coast you're on. Other minor Lebanons exist in New York, Indiana, Virginia, Texas, Pennsylvania, Ohio and Tennessee. There may be more elsewhere.

But since there is nothing interesting to say about these little burgs, let us talk about the country in the Middle East. Lebanon is an Arab country, but a very unique one, as we shall see.

For much of the early-mid 20th century, and to a lesser extent to this day, the coast of Syria was the center of Christian life in the Middle East, its Christian population (mostly Maronite with some Greek Orthodox) having been under French protection since the 19th century. After World War I, Lebanon and Syria were granted to France as a League of Nations mandate, with the French proceeding to carve out the area around Mount Lebanon on the southern Mediterranean coast as a "safe haven" for Christians. For some reason, this Christian zone included large amounts of surrounding land inhabited chiefly by Muslims. The mandate fell under the rule of Vichy France in 1940 after the fall of France to Nazi Germany, before they were kicked out by a combined British/Free French force the following year. Lebanon declared independence during World War II over the objections of the Free French forces, who attempted to arrest the pro-independence government but backed down in the face of international pressure. The last French forces withdrew in 1946.

Lebanon took a small part in the 1948 Arab-Israeli War and provided its Arab allies with supplies, artillery fire and logistical support, but played little role in attacking Israel itself outside of minor border skirmishes. Depending on who you ask, this was because Lebanon was either too weak to wage a full-scale war, or because the Maronite community was rather hesitant about actually winning in case the result was "all right, we got rid of the Jews, who's next

?". However, it did take in over 100,000 Palestinian refugees, a move that was opposed by the Christians, supported by the Sunnis, and generally not given a shit about by the Shi'a. While the consequences of this would make themselves readily apparent in later years, in the immediate postwar period Lebanon appeared to be a beacon of stability in the Middle East. Despite coming close to civil war between Christians and Muslims in 1958, Lebanese life was prosperous... outside the refugee camps in the south of the country at least. Beirut, the nation's capital, earned a reputation as the "Paris of the Middle East."

Within the camps, however, the Palestinians were radicalizing, and the PLO's defeat in the Jordanian civil war

resulted in tens of thousands of PLO members fleeing to southern Lebanon. From there they engaged in numerous attacks on Israel. By 1975 the PLO's activities were too much for Israel to ignore, and Israel launched attacks against the camps. The Lebanese reaction was split along sectarian lines, and soon erupted into civil war. Lebanon was divided into a Muslim-controlled south and a Christian-controlled center and west, with the Syrians invading the north and east to try to gain influence and restore stability to its neighbor. Beirut, likewise, was split between a Muslim east and a Christian west. The war lasted fifteen years, finally ending diplomatically in 1990.

Between 1990 and 2006, Lebanon returned to stability. War-battered Beirut was largely rebuilt, as was much of the rest of the country. Syrian troops withdrew from the occupied territories in 2005. Unfortunately, in 2006, the Shi'a paramilitary group Hezbollah, seeking revenge against Israel's invasion of Lebanon in 1981 (almost forgot to mention: Israel invaded Lebanon in 1981) and with its chief benefactor having withdrawn, launched rocket attacks into northern Israel, even though they had achieved their stated goal of getting Israel to withdraw from Lebanon in 2000, which is part of why many suspect Hezbollah of being either an Iranian or Syrian proxy. The result was the Israel-Lebanon War, in which the Israelis bombed southern Lebanon and Beirut in order to take out Hezbollah. Of course, Hezbollah outlasted the relentless Israeli bombing, and many of the people killed were distinctly not Hezbollah. An entire suburb of Beirut (which was a center for Hezbollah support) was practically leveled by a massive Israeli air raid. Now Beirut had to be rebuilt again.

The long and bloody civil war created a diaspora of (mostly Christian) Lebanese to other countries, who number about 12-15 million — several times the population of Lebanon itself.

In 1983, at the height of the civil war, suicide bombers attacked American marines and French soldiers who were part of an international peacekeeping force in the country's capital, Beirut, killing 299 people. The courageous American President Ronald Reagan, confident in the abilities of his troops and sure of the support he enjoyed from his electorate, responded heroically by going after the people who had planned the attack, reminding American forces of their duties in an inspirational speech and doubling down on America's commitment to a vital element in regional security withdrawing US troops from Lebanon with their tails between their legs.

Now that Syria is in more or less total collapse, millions of Syrians have fled the death orgy. Where have most of them gone? Several million to Turkey, and about 1.5 million to Lebanon; in other words, about 1 in 4 people in Lebanon is a Syrian refugee. At first the refugees were lukewarmly welcomed, but as the price of labor has drastically gone down and there simply not being enough space or resources for the sudden influx of people, many Lebanese harbor some animosity toward the Syrians (especially since Syria has been one of several countries constantly screwing up Lebanon). Combined with the frequent wars and economic disruptions, this threatens Lebanon with the prospect of yet another war.

Despite relative secularism for the Middle East, the Lebanese are generally religious in the modern day. While society is more open than in other Middle Eastern countries, family and tradition are central parts in Lebanese culture and those without a religion or even from a rival sect of the same faith can receive mild mistrust. In essence, the "as long as you believe in something" is more accurate in describing religious tolerance, but it's a certain step up from outright warfare. While the nature of the government limits roles of power to religious sects such as the President being a Maronite Christian (and only Maronite), it's regarded as a way to keep the balance for now at least.