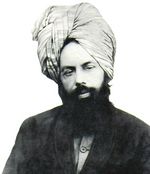 (1835–1908), colloquially known as MGA. MGA claimed he received divine revelation and declared himself to be the Mahdi, a messiah promised by Muhammad to appear near the end times and bring the final triumph to Islam. This proclamation infuriated Muslims worldwide, putting Ahmadis in a position of heresy.

Ahmadis are almost universally discriminated against in Muslim societies, and countless fundamentalist groups have attempted to destroy the community. They retain a population of roughly 12 million worldwide, and claim to be the fastest-growing Muslim group.[1] Today, AMJ is headquartered in Islamabad, Pakistan and London, UK.

The Ahmadi website claims that they are committed to the value of "peace, love, justice, and sanctity of life", reject the use of violence, advocate for the separation of church and state, universal human rights, and women's rights. It also says that MGA acknowledged the wisdom of the founders of other religions including "Zoroaster, Abraham, Moses, Jesus, Krishna, Buddha, Confucius, Lao Tzu, and Guru Nanak."[2] While one likely won't ever know whether a predominantly-Ahmadi nation could create an Islamic-progressive humanist utopia, there hasn't as yet been any Ahmadi Jihadism or oppressions perpetrated by Ahmadis.

Ahmadis claim that Jesus survived the crucifixion, emigrated eastward to escape persecution, reached out to the Ten Lost Tribes, and died somewhere in Srinagar, Kashmir. They even have a tomb dedicated to him. The shrine of Roza Bal was relatively unknown before MGA claimed in 1899 that it is actually a tomb of Jesus.

While Ahmadi doctrines are often claimed to be compatible with science, this seems to be a misconception coming from the fact that the first Muslim Nobel laureate was a Pakistani Ahmadi theoretical physicist, Abdus Salam.

(1950–), questions the notion of evolution with some tired-old arguments like "If we evolved from monkeys, why are there still monkeys?"[3]

MGA claimed that he was a "subordinate prophet", meaning that Muhammad is still the central figure of Islam, and MGA would not exceed him nor alter his teaching.[4] However, this idea is already considered by mainstream Muslims as a breach of the Islamic tenet that says Muhammad was the final messenger.

Some Ahmadis claim that MGA is a mujaddid (a reformer who appears once or twice a century to straighten up Muslim belief) and disagree with his prophethood. They created their own branch known as Lahore Ahmadiyya Movement in 1914.[5] They often call themselves Lahoris, and label the mainstream Ahmadis as Qadianis (from Qadian, the birthplace of MGA). Lahoris only retain around 30,000 members and represent merely 0.002% of total Ahmadi population.

As is the case with any minority religious groups, Ahmadis are an easy target for scapegoating by Islamic fundamentalists and populist politicians in many predominantly-Muslim countries.

The worst among all persecutions occur in Pakistan, the birthplace of AMJ. There are an estimated 4 million Ahmadis in Pakistan[6], but it is the only country where Ahmadis have been constitutionally declared as non-Muslims (since 1974). The declaration was a result of Pakistan's Islamization under the military dictator Zia ul-Haq

's Islamist regime.[7] Since then, Ahmadis are essentially barred from equally participating in the ballot, as there is a mandatory declaration of religion in order to vote.[6][8] Ahmadis have frequently become a target of pogrom as well as terrorism, including 1953 Lahore riots, 1974 anti-Ahmadiyya riots, and May 2010 attack on Ahmadiyya mosques. Over 250 members of the community have been killed since 1974.[7][9]

Anti-Ahmadiyya sentiment is also a growing problem in Indonesia, where there are an estimated 400,000 Ahmadis. In 2011, a mob of 1,500 radicals led by an Islamist vigilantist organization Islamic Defenders Front carried out an attack on Ahmadi villages, leading to the death of three Ahmadis.[7]