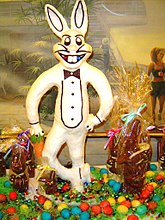 Finding a picture of the Easter Bunny that isn't unintentionally creepy is almost impossible.

The Easter Bunny is a rabbit who delivers eggs to people (primarily in North America and certain parts of Europe) on Easter. The eggs may be real ones that have been painted, chocolate ones or colored plastic ones that may or may not contain candy.

Latin-German essay about Easter eggs that no doubt seemed very clever at the time (and rose to #4 on the New York Times bestseller list for 1682.)

Notwithstanding the fact that the rabbit's association with Easter appears first in Alsace in the seventeenth century, various nineteenth century folklorists and their followers just knew that the Easter Bunny had to be a "pagan survival". The usual reasoning process to arrive at this conclusion was given an unusually frank treatment in Holtzmann's German Mythology: "The Easter Hare is unintelligible to me, but probably the hare was the sacred animal of Ostara". The existence of the alleged goddess Ostara is likewise dubious.[2]

Elsewhere in Germany, the Easter Hare was eaten. This was said to "openly bear the marks of the original paganism;" none but a heathen bold would make a dinner of hassenpfeffer, it seems. And:

This too, apparently, counted as pagan; if eating a calf's head for breakfast doesn't make you pagan, we don't know what will. It is understood that the offer still stands.[2]

As rabbits don't have anything to do with Christian theology, and play only a slight role in pagan theology as well, why this continues to be accepted by some fundamentalists remains a mystery. The pagan survival folklorists had to go as far as the Menominee god Manibozho

before they could find pagans actually worshipping rabbits. The poet Martial

, a genuine pagan, knew nothing of the Easter Bunny, but he did mention a belief that eating rabbit for seven days straight would turn any woman beautiful.[3]