Goddess movement and the Matriarchal religion are all terms for a post-feminist movement (1970) to "reinvent" religion to glorify the woman. It is often tied into Wicca, neopaganism, or other New Age beliefs. This religious and cultural movement is based on a pseudohistorical claim that all cultures were once matriarchal, and that matriarchal cultures would clearly have been superior to the war-mongering, penis-worshiping patriarchal cultures that quickly dominated the world with the advent of technology.

Like many instances of pseudo-history, there is a grain of truth to the theories, but the vast majority of it is just woo.

Claims of the historical religion[edit]

The Venus of Willendorf. Definitive proof of the ancient gynocracy or prehistoric pornography?

Much of the basis for the claims of an ancient matriarchy are based on the arguments put forth by the late archaeologist Marija Gimbutas (although Gimbutas herself preferred the term "matristic" to denote a sense of egalitarianism).[1] Gimbutas' claims are recycled in many works of Goddess pseudo-scholarship, most famously Riane Eisler's The Chalice and the Blade.[2] Proponents relate it to finds at Çatalhöyük, a settlement in southern Turkey inhabited from 7500 BCE to 6400 BCE, home to around 8000 people at its peak, and one of the oldest neolithic settlements in the world. A large number of statues and other images of women were found there, notably the "Seated Woman of Catalhöyük" found by James Mellaart in the 1960s; Mellaart hypothesised that these were signs of a matriarchy.[3]

The matriarchy hypothesis is widely regarded as crackpot within both "mainstream" and gender/feminist archaeology.[4] It relies on a specious interpretation of ancient "Venus" statuettes and figurines. One of the glaring problems with this is that the artifacts range greatly in their depictions -- the "Venus of Willendorf," pictured at right, is a famous example but not wholly typical. Positing a single religion and social structure on this basis would require a massively speculative hypothesis that much of the peoples of the Eurasian landmass shared either a unified or very similar social structure and religious ideology over a period of approximately 30,000 years from the Late Paleolithic to the Neolithic.

Besides this tiny complication, there is also no reason to assume that all the figurines represented a goddess. For one, not all the figures are actually female -- many are male figures and a number are ambiguous in terms of sex. The context that some of the figures were found in (e.g., trash pits) does not suggest that they were sacred items. In fact, there is no definitive consensus on how the various statuettes should be interpreted.[5] Often these finds were not supported by later, more in-depth work: subsequent more detailed excavations at Catalhöyük failed to find any indication that the society was indeed matriarchal.[3] In addition, even if they were meant to represent goddesses, that doesn't necessarily imply that these societies were matriarchal or matrifocal. The ancient Greeks and the Catholics produced many depictions of Athena and the Virgin Mary respectively, but neither came out of a matriarchal society. This interpretation also ignores the numerous depictions of animals, violence, and death in Neolithic-period art.[6] Animals were widely depicted in prehistoric art, therefore our ancestors worshiped and were ruled by animals, QED.

Tom Servo A statuette of the claimed Minoan Snake Goddess. No Godiva-like hair for that chick.

Another set of statuettes claimed to be evidence supposedly depict a "Minoan Snake Goddess." The original Snake Goddess figurines were found in Crete during the early 20th century by Arthur Evans. What, exactly, the figurines represent is also unknown, but Evans claimed them to be central to a Minoan religion of goddess worship. Contemporary reanalysis demonstrates that many of the them were forged or made to conform more to Evans' idea of the alleged goddess during restoration, though a couple of the statuettes and some shards appear to be legitimate.[7] After Evans had completed his excavation, claims for the existence of the Minoan goddess religion were further inflated by a cottage industry of Snake Goddess forgeries and other fake "Minoan" artifacts.[8]

On the plus side, some studies on legitimate Minoan art suggest at least the possibility that it could have been an actual matriarchal culture[9], though the idea that it was a peaceful paradise has been debunked with archeological evidence showing that it was as violent and warlike as any other Greek civilization[10], up to and including evidence of human, especially children, sacrifice.

Before the modern iteration of this idea came about, it was originally popularized by J.J. Bachofen in his 1861 book Das Mutterrecht ("Mother-Right").[4] Bachofen, however, did not view this ancient matriarchy as a golden age, but as a dark age before patriarchal systems arose due to the "natural superiority" of men. And so the story is today repackaged and sold as a tale of empowerment to women.

In fact, the idea of "matriarchy" fuses two types of nineteenth century racist myth-making. The first of these comes from nineteenth century armchair anthropologists, who concluded on the basis of travellers' tales that there existed societies so primitive that they did not know about the birds and the bees: they did not understand that there was a connection between sexual intercourse and childbirth. These tales in turn were the result of primitive techniques of field work: when oddly dressed foreigners roll into town and ask where babies come from, you're likely to tell them about storks and cabbages. This "matriarchy" was a purely hypothetical state that supposedly existed before the "discovery" of fatherhood. When paternity was discovered, men realized that they were the fathers and instituted male dominion over women. These ideas were popularized by Johann Jakob Bachofen

and later made it into influential books like Friedrich Engels' The Origin of the Family, Private Property and the State.[11] It has also been used with the popular prehistoric fiction series Earth's Children, with Stone Age peoples portrayed as wholly unaware of biological fatherhood before main character Ayla discovers it. They are also portrayed as more egalitarian and sexually liberated, with the realizing of paternity implied to cause later male dominance near the end of the series.

The second strain of nineteenth century racial mythology that created the Goddess is more familiar: it involves Aryan supermen. These handsome white devils are imagined to have put an earlier pastoral and egalitarian utopia worshipping a universal Goddess to the sword, imposing warfare, male dominance, and male deities in its stead. This tale was popularized by Robert Graves's well-known work of pseudohistory, The White Goddess, and more recently by Marija Gimbutas.[12] There is simply no archaeological evidence for this tale of conquest, but in addition to the new religion, it's also become a stock trope of historical fantasy fiction.[13] 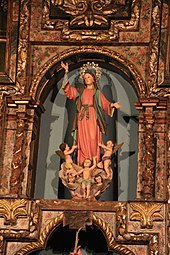 A cult image of Mary, mother of Jesus from Spain. Worship of this quasi-deity did nothing for women's rights in the culture where it was made.

There is no necessary relationship between the worship of female deities and the status of women in a culture. Hinduism worships a large number of goddesses, but a number of Hindu sects throughout history have been associated with practices like sati and male polygyny. Even nowadays, feminism has made noticeably fewer strides in India (where the majority religion is Hinduism) than it has elsewhere.

In the seventeenth century Netherlands, worship of female cult images was rigorously suppressed, and no one prayed to goddesses. Women enjoyed relative autonomy in this commercial, bourgeois society. They were considered competent to own property and to manage businesses, unlike in many Western European societies of the period. By contrast, in seventeenth century Spain, female quasi-deities were prominent in popular devotions. The idealization of women (and of female chastity) promoted by the deified women simply did not translate into autonomy and high regard for living women. Rather the opposite: the ideals embodied in the goddess were themselves a part of a network of social control, and living women would always fall short of the idealized virgin.[14]

Although today it is associated with feminist circles and equality of the sexes, the concept has had no single ideological association, and has been advanced by everyone from communists to Nazis. It was formerly popular in right-wing Germanic circles studying Celtic and Teutonic culture: one of the original sources was Johann Jakob Bachofen's Das Mutterrecht (Mother Right, 1861), which drew on the Hegelian concept of history as a conflict between opposing forces, in this case the masculine and feminine. Bachofen remained a minority interest for decades, although the communist Engels mentioned him critically in his Origin of the Family, Private Property, and the State, which linked the matriarchal family with communism. Carl Jung, who wrote extensively on the masculine and feminine sides of the mind and informed later debate about gender roles, knew Bachofen's work via the dissident Freudian psychoanalyst Otto Gross.[15] In the USA writing in the mid 19th century, Lewis Henry Morgan described matriarchy in Native American culture, and while Engels was also familiar with his work, Morgan did not have a wide influence until he was picked up by late 20th-century feminists.[16]

While little-known in the English-speaking world, in Germany the concept of humanity's pagan matriarchal roots was popularised in the early 20th century by Ludwig Klages and Alfred Schuler, whose paganism was tied in with an antisemitism that despised Christianity for its Jewish taint. They viewed the goddess in deeply sexist terms, seeing the division between the masculine and feminine as between the intellectual and animal and seeking a return to the latter. Bachofen's work was rediscovered in the 1920s and became a key source for protofascist philosophy. Fascist ideology celebrated blood and soil, conceptualised as female, alongside an idealised womanhood centred around the home, while often deprecating stereotypically masculine knowledge and reason. (Although some thinkers such as Alfred Bäumler preferred Nietzsche's virile masculinism to a gynocentric viewpoint.)[15]

The Nazi philosopher Ernst Bergmann managed to twist the concept of patriarchal vs matriarchal societies to argue that matriarchal societies were warlike and belligerent (good) while patriarchal societies were intellectual and pacifist (bad); he believed women were better leaders of families because they were able to decide on issues of racial hygiene, select strong breeding partners, and kill weak children at birth. He spoke of ending conflict between the sexes, and wrote in 1934, "it is more just and truthful to interpret the ideas of National Socialism and social anthropology in the spirit of matriarchy".[15] Some people see any recourse to myth, even matriarchal myth, as essentially reactionary and conservative, as these links to Nazism would suggest, but according to Cynthia Eller, the myth of matriarchy can be used for widely contradictory purposes owing to its vagueness and indeterminacy, seen in its use by everyone from Engels' communism to liberal feminists.[15]

Pseudohistory of the European witch-hunts[edit]

See the main article on this topic: European witch-hunts and pseudohistory

Goddess worshippers rely on a pseudohistorical account of the European witch-hunts, often inflating the number of casualties to the absurd figure of nine million. They are also fond of calling it the "burning times" or "patriarchal genocide," selectively leaving out male victims of witch-hunts (around a quarter were males).